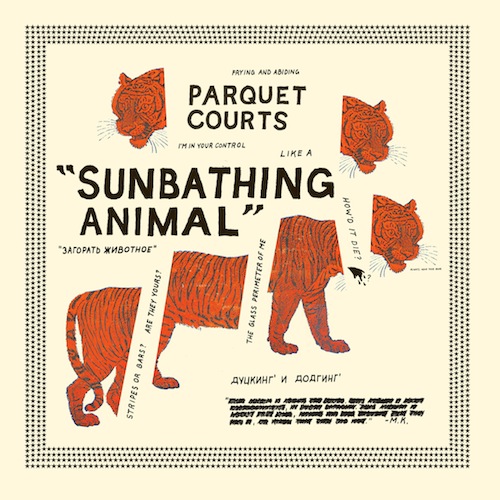 It’s not easy to sound any more casual than Parquet Courts did on their 2013 album Light Up Gold. Frantic enough to rip through gleefully sardonic post-punk anthems for two minutes at a time, but relaxed enough not to gloss over every imperfection, Parquet Courts evoke a comfortably laid-back illusion. If you choose to do so, you can take their songs at face value — stoned, slacker jams about finding snacks and all the shitty jobs they could be working, but don’t. The subtext isn’t that much deeper below the jangly surface, however; in a worst-case scenario, those shitty jobs may very well be the only option if this music gig doesn’t work out. And when something that heavy hangs on your conscience, the decision between roasted peanuts and Swedish fish seems a lot more important than it should be.

They’ve since moved on to other things, and with surprising urgency. For a band that never sounded as if they were in any particular hurry to do much of anything, all of a sudden, the title track and first single on new album Sunbathing Animal sees the group launching into a sprint. Galloping along at a brisk 174 BPM, the band isn’t just caught in the throes of a truly badass jam session, they’re racing to keep up with Andrew Savage’s long-winded lovesick philosophizing. It’s hard to tell what’s driving this machine — the band’s rollicking cowpunk melody, or Savage’s tongue-twisting verse. It’s so chaotic and intense, you almost don’t notice just how downright sweet it is, as Savage pitches to an unnamed second person, “Who greets me first when I arise? Who creeps into my half-shut eyes?/ It’s in the blaze of your embrace where I feel more real and alive.”

Contradictions abound on Sunbathing Animal, a brilliant mess of an album that finds cohesion in the clash of ideas it presents. It’s the most instrumentally tight the band has ever sounded, but the loosest stylistically. At times the songs on Sunbathing Animal seem intensely personal, but they’re wrapped in layers of oblique language and Dan Bejar levels of complexity. And for how freewheeling and comfortable with imperfections the band seems to be, they’ve never hovered so close to perfection as they do here.

As perfection goes, on Sunbathing Animal Parquet Courts sound more keenly in tune with bands that have unequivocally achieved such a thing: The Velvet Underground, Wire, Television, The Rolling Stones, Mission of Burma, Pavement, et al. But at their most relaxed, Parquet Courts were never so lazy as to settle for pastiche; on the surface, “Black and White” brings to mind any number of standouts from Wire’s Pink Flag, but it’s twice as long as most of them, and sets up its pogos and hand-claps for a new wave party that ponders the nature of religion and existence: “Is the solitude I seek a trap where I’ve been blindly led?/ Tell me, where then do I go instead?” The jerky nature of “What Color Is Blood?” almost distracts you from how urgent and catchy it is. There’s an opposite reaction that occurs with seven-minute standout “Instant Disassembly.” It’s so laid-back, its easy-going melody locking into a loop that removes the sense of urgency that drives the band’s best tracks. But structurally speaking, it’s as tight as Parquet Courts get.

With Sunbathing Animal, there’s a feeling that Parquet Courts are aiming for something bigger — something timeless. Few rock bands today so nimbly stitch together a classic vibe with a contemporary sound, and a sound that began so bright has only grown warmer with time. Toward the end of the lengthy first verse of “Instant Dissasembly,” Savage sings, “Turn on the white noise murmur of the AM band and the last classic rock band’s last solid record creeps in/ A call out of the blue from an old, old friend.” All the while, the music seems to parallel the crackly broadcast he so desperately seeks, their shimmering chords and gorgeous refrains at once fresh and familiar. Parquet Courts are still a young band, but in a short time their music has come to feel like an old friend. Drop the needle at almost any point on this record — next week or in five years — and it’s likely to feel like that call out of the blue, pat on the back, or clink of the glass.