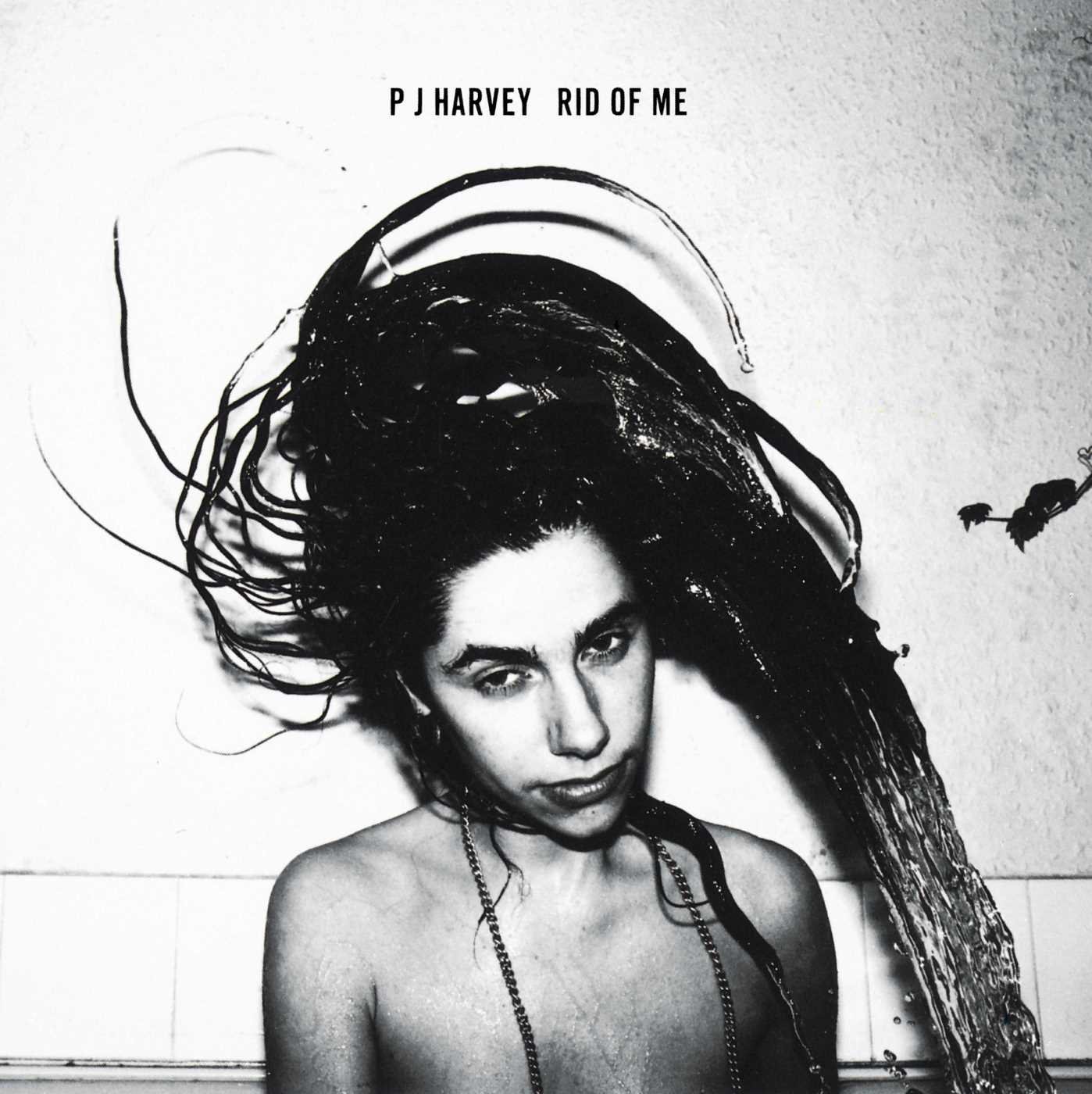 PJ Harvey is a band. Or at least it was—the early years of Polly Jean Harvey’s musical career were spent at the helm of a trio, which just happened to share the same name as its leader, and featured members of her former band, Automatic Diamini. And PJ Harvey sounded like a band—a lean, raw but muscular one, unencumbered by tacky synthesizers, bloated string sections or schmaltzy piano. They played guitar, bass and drums, and they played the fuck out of them. Not virtuosically, but with an unrelenting power and ferocity, as each riff or bassline was a fight to the death. In fact, to call PJ Harvey a “band” might even underplay just how intimidating they actually sounded.

As if to showcase just how menacing that sound was on their second album, 1993’s Rid of Me, PJ Harvey fashioned the volume knob into a weapon. It begins with the sound of near-silence, the hushed sound of a faint, repetitive chug of a single chord on an electric guitar. Eventually Harvey herself can be faintly heard, her distant voice pleading, “I beg you my darling/ Don’t leave me, I’m hurting.” She sounds wounded, someone in need of being nursed back to health. But like the cliche about backing an injured animal into a corner goes, Harvey practically punishes those that dare lean in closer to lend an ear; at 2:11, she unleashes the whole of her wrath, the band exploding through the speakers all at once. Pity the poor listeners who nearly blew their eardrums when that climax first hit; I am one of them. The only remedy is through repeated exposure.

On Rid of Me, PJ Harvey play like the stakes couldn’t be higher—like the life of the band depended on it. And it very nearly was Harvey’s own personal swan song, her studies in sculpture nearly winning out over her music career. “After making Dry, I thought, ‘I’ll make one more record,” she told Spin in 2013, “Then I thought people will probably get bored of me.” It’s quaint to hear one of contemporary music’s most consistently inventive artists think of her music as a passing fancy. That’s not how things turned out, and the directions she’s taken in the 25 years since Rid of Me was released only indicate just how comfortable she’d eventually become with taking risks. But Rid of Me wasn’t about following experimental whims or challenging one’s musical identity. It was about making the most punishing rock album possible, and on that she and her bandmates succeeded wildly.

Crucial to shaping the sound of Rid of Me was producer Steve Albini, with whom PJ Harvey recorded in Minnesota, several thousand miles from her rural home of Dorset, England. Compared to the fiery rawness of PJ Harvey’s 1992 debut Dry, Rid of Me is simultaneously crisper and more abrasive, its jagged edges given the clarity to render them that much more dangerous. True to his reputation as a professional engineer—he’s never been comfortable being called a “producer”—Albini sought to capture the sound of a band in their element, playing loud and tight without a reliance on overdubs. Most of it was tracked in just three days, and for someone who’s repeatedly recorded the soul-swallowing sounds of a band like Neurosis, Albini captured what amounts to one of the heaviest recordings of his career. Not to mention one that takes a ball-peen hammer to straightforward rock rhythms and structures. Harvey intentionally set out to write songs in odd time signatures—such as “Missed,” “Hook” and “Man-Size”—and the 14 tracks on the album are just as likely to disorient as they are to pack a wallop.

On tour behind the album, Polly Jean Harvey wore sunglasses and feather boas onstage, adopting a sort of kitschy rock star persona. Yet the figure she assumes on the album is anything but, alternating between violent grotesqueries and unflattering interactions between men and women. If Kate Bush wanted to exchange the experience, Harvey wanted to burn it to the fucking ground. She could be provoked into vengeful acts (“I’m gonna twist your head off, see“), really fucked up stuff (“No other way, cut off your legs“). She turned sexual acts into scenes of horror (“Rub ‘Til It Bleeds”), and used blunt honesty to twist the knife in further (“you leave me dry“). It’s not always quite so brutal, but it’s almost never pretty, even if it’s an exaggerated artistic persona she projects. “People have a very specific idea of what I am,” she said to the Chicago Sun-Times in 1995, contradicting the intense figures at the center of much of Rid of Me‘s songs. “Some kind of ax-wielding, man-eating Vampira. And I’m not that at all—I’m almost the complete opposite.” Yet however agreeable she may be personally, Harvey also said one of her objectives with her art was to shock, and after 25 years, Rid of Me hasn’t lost any of its confrontational bite.

Though the bulk of Rid of Me comprises the sound of a trio playing twisted punk-blues, it has a handful of curiosities amid its guitar-driven anthems. The song “Man-Size” appears twice, once in a “Sextet” version which replaces the guitar, bass and drums for a chamber sextet, and its discordant minor key sound is utterly terrifying. Harvey also included a cover of Bob Dylan’s “Highway 61 Revisited” on the suggestion of her parents, both Dylan fans. It’s a nastier, deeper groove than on Dylan’s original, and remains a live staple for Harvey. It was a recent highlight on her Hope Six tour, along with a dense, percussion-heavy blast through “50 Ft. Queenie.”

Elvis Costello most famously said of the album that most of its songs “seem to be about blood and fucking.” For Costello, a longtime fan of Harvey’s, that was a compliment of sorts, even though Harvey didn’t quite agree with him. And, indeed, the intensity of it is what divides fans from detractors. In his review at the time of the album’s release, The Independent‘s Ryan Gilbey described it as “a trial to endure.” He’s only wrong insomuch as he considers that a bad thing. Rid of Me takes a lot out of you; if Harvey, Ellis and Vaughn didn’t collapse from exhaustion after playing these brutal anthems, they’re made of steelier stuff than most. Whatever physical condition they were in, the three musicians ultimately couldn’t continue working together much longer, growing apart while higher demands were made of them. The band broke up joining U2 on the road during their Zooropa tour.

In 1993 Harvey told Rolling Stone that she wanted to be an artist like David Bowie, who continuously changed his sound and experimented with his image. And though Harvey’s never quite reached Bowie-like levels of mainstream success, she has spent the 25 years since Rid of Me‘s release in a continuous state of evolution. She played a somewhat more radio-friendly interpretation of electric blues on To Bring You My Love, embraced more gothic textures on Is This Desire?, polished up her pop songs on Stories from the City, Stories from the Sea, and most recently traded her gothic narratives for a more journalistic form of storytelling on 2016’s The Hope Six Demolition Project. But her interest in evolving as an artist also partially came from a place of mischief and defiance, as much as it did of following a restless muse. Her own popularity be damned, she sneered to Rolling Stone, “I’ll never give the people what they want.”

By 1994, PJ Harvey was no longer a band, though Polly Jean kept using the name for everything she released since. Still, nothing she’s released since has sounded anything like Rid of Me. How could they? An album this raw and relentless leaves bruises on its players’ hands, and sucks the wind from their lungs. To say nothing of how intense it is to experience as a listener. A career’s worth of albums this draining and demanding is unsustainable, but the primal scream is on the record. The document is there to turn up when the time is necessary to cast the demons out. Or, if you prefer, invite them back in.