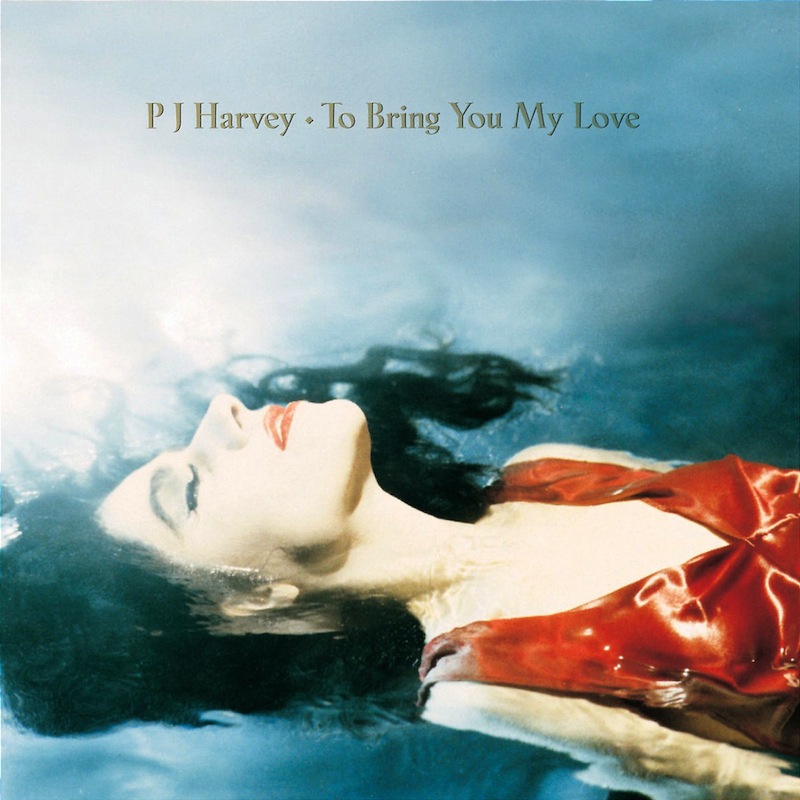 “I was born in the desert
I been down for years
Jesus, come closer
I think my time is near

To Bring You My Love found PJ Harvey taking a baptismal leap in the Delta water. Backed with production by Flood and John Parish, Harvey dives inside Southern-inspired tides, searching for creative salvation within the sinister soul of American blues. In the album’s breakout single “Down By The Water,” as Harvey sings “Little fish big fish swimming in the water/Come back here, man, gimme my daughter,” she offers lyrical odes to one of her heroes while growing up, Leadbelly, particularly his classic tale “Salty Dog.” And you can hear these same blues influence, throughout, that Polly Jean was reared on while growing up in Dorset, England.

There’s a touch of post-modernism that lifts Harvey’s style into a sort of 21st Century blues that’s timeless, twisted and out of this world. Lyrically inspired by the dark prose of Tom Waits and soon-to-be romantic partner Nick Cave, Harvey’s lyrics lean toward serial killings in “Working for The Man,” drowning of children in the already mentioned “Down by the Water,” and deep penetrating sexual role reversal of “Long Snake Moan.”

“‘Cause I’ve prayed days, I’ve prayed nights
For the lord just to send me home some sign
I’ve looked long, I’ve looked far
To bring peace to my black and empty heart”

To Bring You My Love is a longing for a woman’s independence, search for true love in a wasteland of misogynistic blues and loss of God. You can feel this in her bloody and heart-clenching lyrics. These aren’t the domestically spirited songs from last year’s White Chalk. The incarnation of Polly Jean Harvey that emerged in 1995 is one of a siren sonically slithering around the tales of these desolated songs like an outlaw seductress. You feel her sensual spark oozing from her soulful croons as she attempts to lure her lover to bed in “C’mon Billy.”

What I remember most of hearing To Bring You My Love for the first time is that Polly Jean isn’t just trying to seduce us, she slowly lures us inside of her world of sex and death with a voice that sweats an irresistible scent. The funny thing is that these songs aren’t as commercially accessible as Stories from The City, Stories from The Sea but are equally as memorable. It was no accident that Harvey wore a scarlet dress in the video from “Down by The Water.” Polly Jean was reincarnated from a tomboy songstress into a sexy siren. She was a dangerous damsel that created a world of danger and desire with every spin.

I finally witness the dark world of To Bring You My Love come to fruition this past year when I saw Polly Jean Harvey live in Los Angeles. She opened with the title track, and the bluesy guitar riff that comes out of nowhere on the album came alive on stage as she stood there, elegant and stoic, minus the red satin dress from the video. She’s a daring and uncompromising artist that’s unafraid to show us the dark side of her soul. To Bring You My Love is the bravest example of this. It’s one that I frequently go back to, and has evolved in my ears from a fantasy into a journey while discovering the true meaning of love, lust and dreams.