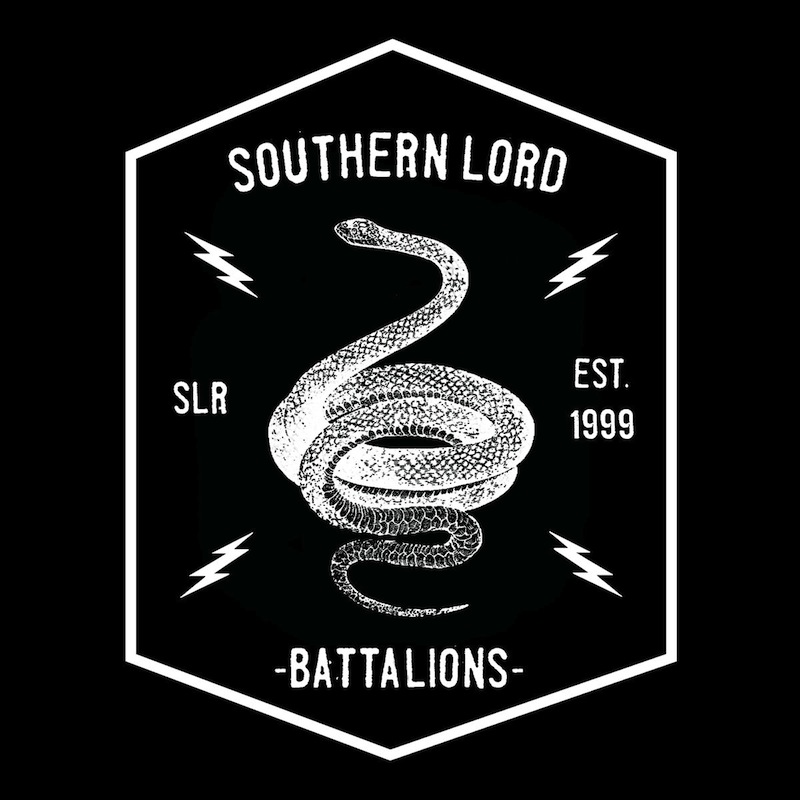 Metal labels have been celebrating quite a few anniversaries of late. Just last year, Metal Blade Records—once home to everyone from GWAR and Slayer to The Goo Goo Dolls—celebrated its 35th anniversary. And this year marks the 30th birthday of the comparatively legendary Century Media, whose roster still includes some of the best bands in metal (hi, Tribulation). But this month I’m mostly here to celebrate the legacy of a label that sometimes helped turn metal into something a bit more avant garde and weird and sometimes went straight for throat-ripping hardcore: Southern Lord.

Founded in 1998 by Greg Anderson, Southern Lord began primarily as an outlet for his own various projects, such as Burning Witch and Thorr’s Hammer (featuring later Sunn O))) partner Stephen O’Malley) and Goatsnake. But eventually the label’s roster expanded to include a more diverse range of bands, including Japanese shape-shifters Boris, and another infamous Japanese band, the serial-killer-fixated Church of Misery. And within five years, it became a clearinghouse for experimental and avant garde sounds in heavy music, from the epic noise-sludge of Khanate to the dronescapes of Sunn O))) (whose Monoliths and Dimensions is as profoundly gorgeous as heavy music gets), on up to the more post-rock leaning sounds of drone-doom architects Earth, electronics of Oren Ambarchi and lo-fi atmospheric black metal artist Xasthur. And let’s not forget Probot—Dave Grohl’s one-album metal project that featured legends from throughout the ages, including Celtic Frost’s Tom G. Warrior, Venom’s Cronos, and Motorhead’s Lemmy Kilmister (R.I.P.).

There’s no question that Southern Lord helped to change the shape of heavy music over the past two decades. And yet, not everyone sees that as a positive. In a Reddit Ask Me Anything with Decibel editors Albert Mudrian and Andrew Bonazelli in 2013, someone asked why they had beef with Southern Lord, to which Mudrian replied, “Greg Anderson and I agree to disagree. He thinks SUNNO))) is good music and I think it’s dogshit. I think Decibel is cool. He doesn’t.” Though there’s probably some hyperbole in there, it’s hard not to read into it a bit. Southern Lord releases don’t show up that often in year-end lists, and even when they do, like when Power Trip’s Nightmare Logic did last year, Southern Lord wasn’t attributed as the label of release. Harsh, guys.

Not everything that Southern Lord has released has been absolutely essential—there was a period of a lot of fairly similar crust and melodeath albums coming out a few years ago that felt a bit too narrow in focus (and of that batch, the absolutely ripping Black Breath album Sentenced to Life pretty much has you covered)—but that it continues to challenge heavy music is what makes the label one worth watching. But then again, it’s a label that has frequently released some utterly essential music. I’ve written before about how Boris’ Pink was a truly eye-opening experience for me as a fan of heavy music, and while we’re on the subject, that Power Trip album is pretty killer. (Not to mention the various incarnations of Greg Anderson and Stephen O’Malley’s bands over the years, which helped to prove ambiance and heaviness can coexist.) Oh, also that new Agrimonia album? Fucking amazing.

So while the temptation to select 20 of my favorite Southern Lord releases did seem irresistible at first, I thought it best to stick with a playlist for the time being. As Southern Lord hits its 20th anniversary, here are 20 tracks from its catalog that showcase the best, most challenging and enduring music from its catalog.

The best metal tracks of February 2018

Of Feather and Bone – “Lust for Torment”

Denver’s Of Feather and Bone have made some changes. The band’s 2015 release Embrace the Wretched Flesh was all concise yet visceral crust punk mayhem, heavy as fuck but still straight to the point—and the jugular. Somewhere in the interceding years, they embraced death metal in a big way, and it really works for them. “Lust for Torment,” the first track from their upcoming Profound Lore debut Hymns of Perversion, shows off some guttural tricks that have an utterly nasty aesthetic. Just filthy. Wretched, disgusting and awesome. With bands such as Vastum, Horrendous and Blood Incantation showing off new avenues for death metal in recent years, it’s encouraging to hear these Denver punks get brutal on their own terms. They could have done just fine pursuing the crust-laden aesthetic they set out with. This sharp turn makes their next step all the more interesting.

[from Bestial Hymns of Perversion, out March 23; Profound Lore]

One of the annoying side effects of metal’s popularity growing among listeners who previously hadn’t been indoctrinated into the ways of heavy music is that there’s still a stigma attached to heroic, classic heavy metal sounds. I mean, I get it. But also get over yourselves. You fucking watch Game of Thrones you big dorks (not too cool for Ed Sheeran, I see). Visigoth is, by all means, pretty heroic as far as heavy metal goes, something like vintage Iron Maiden mashed up with Conan the Barbarian. On “Steel and Silver,” their riffs are mighty and their swordsmanship likely is too. Listening to their solos feels like a fight for one’s honor. Yet it’s all so unabashedly catchy and melodic, it’s just impossible to resist, by Crom.

Given how often I’m in a rush to be somewhere or make a deadline, I understand that asking someone to carve out 15 minutes to listen to one song is actually a pretty severe request. But it’s worth it to soak in every excruciating moment of this death-doom epic from Mournful Congregation’s new album. The guitars are just colossal, both in how deep and dark those riffs reverberate and in how mightily their harmonized leads soar. There’s no question that this moves at a pace much more gradual than a lot of listeners might be comfortable with (the next track in the lineup here will fix that, so no sweat), but this isn’t music for starting up a circle pit. Perhaps counterintuitively, Mournful Congregation’s music is to be absorbed slowly, its many moving parts taken moment by moment as to make the whole of it feel all the more powerful. It’s harrowing stuff, but it’s also quite moving. That’s doom metal at its best.

from The Incubus of Karma, out March 23; Osmose/20 Buck Spin]

There’s no way to say you’re a Bay Area thrash metal band without anyone’s mind immediately going to vintage Metallica or Exodus, and rightfully so. They own that classic era of metal, and pretty much any hesher who’s picked up a guitar since 1983 knows it. Primal Rite are a newer band from San Francisco with a similar set of influences, and good lord do they slay. (Pun partially intended, though I know that’s Southern California.) “Interference” is a powerful indication of the strengths that Primal Rite wield. Chunky power chord riffs, galloping rhythms and whammy-bar soloing is all present in the furious onslaught of “Interference,” which fits in comfortably next to the most recent offering from Power Trip. And for that matter, there’s a heavy dose of hardcore bulldozing through the track, making any mosh-pit activity essentially mandatory. It’s old-school in its influences but sounds contemporary. Everything comes full circle, perhaps, but this feels essential to where metal is now, and where it’s headed.

[from Dirge of Escapism, out now; Revelation]

The phrase “Cascadian black metal” has been thrown around to an absurd degree in the past decade or so, typically to denote a certain regional type of West Coast black metal that trickles from the same wellspring as Wolves in the Throne Room, Weakling, Ash Borer and so on. (And the backlash started long ago, for those curious.) Eigenlicht are at least regionally correct in that regard—they formed in Olympia, Washington, and their brand of cinematic, synth-laden black metal has a kind of wintry, atmospheric quality about it that lends itself to getting back to nature via primal screams. “Labrys” is an intense and at times quite beautiful take on black metal that’s as much about creating something monumental and intricate as it is grim and frostbitten, to borrow a cliche first-wave phrase. It’s certainly intense, but that’s not necessarily the whole of it. Eigenlicht is just as often awe-inspiring or hypnotic. Not every metal song that crosses the 10-minute mark justifies its length, but “Labrys” is a journey worth taking all the way to its finish line.

[from Self-Annihilating Consciousness, out Feb. 16; I, Voidhanger/Gilead]

The best metal albums of the month.

Agrimonia‘s Awaken: While we’re on the subject of Southern Lord, boy is that label starting off their 21st year strong. This Swedish crust-punk band has reached new heights of songwriting and melody on their latest, which for that matter is soaring and heavy as fuck. Almost every track on the album merits its own side, they’re that fucking epic. They’re also all pretty fantastic compositions, metal, hardcore or otherwise. (Southern Lord)

Hooded Menace‘s Ossuarium Silhouettes Unhallowed: Doom metal has been fertile ground for creativity of late, with everything from funeral and death-doom achievements to traditional doom being a source of stellar songwriting. Hooded Menace combines all three in their unique way, delivering some heavy devastation with emotional, melodic material that’s consistently gripping and often overwhelming. It’s magnificent. (Season of Mist)

Mammoth Grinder‘s Cosmic Crypt: Of all the album picks in this roundup, Mammoth Grinder’s is the most straightforward, a raw and pummeling set of thrashy death metal that doesn’t often break from its furious assault. And it doesn’t need to, to be honest. Given that we’re only a bit over a month into the new year, it’s reassuring to know that there’s a go-to set of blistering aggression at the ready when we need it. (Relapse)

Portal‘s Ion: I won’t be reductionist and say that Portal never diverts much from the formula, but on some level there’s always an expectation of utter, terrifying intensity with everything they release. Ion has the best production of their career, however, and that goes a long way. The terror remains, but it’s in much closer focus, suggesting that the monster just out of sight isn’t the scariest thing—it’s being directly face-to-face with the monster itself. (Profound Lore)

Tribulation‘s Down Below: Full disclosure—this is my album of the year so far. I’ve been on the Tribulation train for a few years now, and 2015’s The Children of the Night pretty much sealed it. Down Below is a refinement of that album’s gothic grandeur. It’s no less dramatic or ornate, but the songs are a little shorter, the hooks sharpened and the melodies all the more immediate. Tribulation’s always had a little bit of classic rock in their blood, and they’ve never made rock ‘n’ roll sound quite so evil. (Century Media)