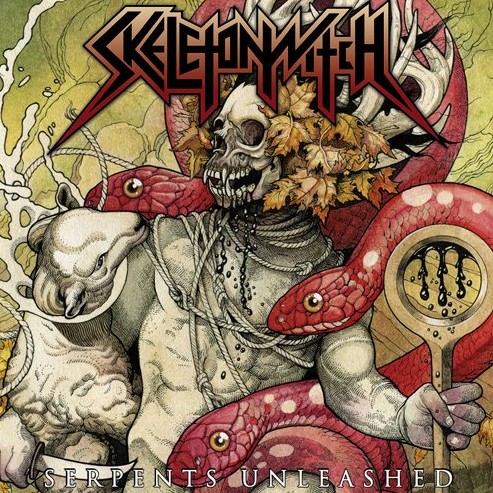 Thrash/black/party metal band Skeletonwitch is roaring back from two long years of touring and recording in 2013, with a brand new album titled Serpents Unleashed. Their follow-up to 2011’s Forever Abomination is set for release Oct. 29 via Prosthetic, and was recorded by Kurt Ballou of Converge, at GodCity Studios. But wait, the heavy metal super team just keeps growing! The artwork, as you can see above, was created by John Baizley of Baroness. There’s about a 99 percent chance we’re going to love this album based on personnel alone — though few bruisiers know their way around a hook like Skeletonwitch.

In a slightly less conventional promotional campaign, the band is offering up new song “Burned From Bone” as a free download, by texting “SERPENTS” to 24587. Jay Z’s not the only guy who can take up cell phone real estate!

1. Serpents Unleashed
2. Beneath Dead Leaves
3. I Am Of Death (Hell Has Arrived)
4. From a Cloudless Sky
5. Burned From Bone
6. Unending, Everliving
7. Blade On The Flesh, Blood On My Hands
8. This Evil Embrace
9. Unwept
10. Born of the Light That Does Not Shine
11. More Cruel Than Weak