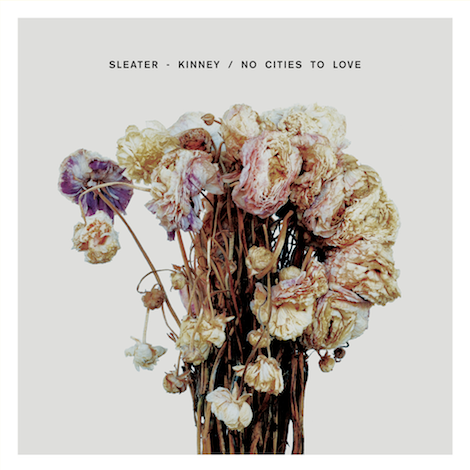 It’s easy to be cynical about rock reunions. From a distance, the increasing rate of ’90s cult acts getting the band back together for the festival circuit sometimes feels like manipulating nostalgia for the purposes of cold, hard cash. It’s even worse when the band in question takes it a step further into the recording studio, only to deliver a colossal failure, like The Pixies’ Indie Cindy, or The Stooges’ The Weirdness. But all it takes is the right band to make even the most hard-hearted critic drop the shields and welcome those memories back. Every band not named The Smiths has its price, and every fan has their wishlist — there’s no getting around it.

That price isn’t always measured in dollars, however. When Sleater-Kinney announced their return in fall of 2014, it coincided with the release of a career-spanning box set on Sub Pop that sold out its first pressing by street date, it proved — if nothing else — that demand was there. But the 10 years that have lapsed since their final album, The Woods, have suggested that nobody in the band really needed this reunion; Carrie Brownstein, Corin Tucker and Janet Weiss have all kept plenty busy with their own musical projects, and Brownstein has carved out a successful career in comedy with Portlandia. For Sleater-Kinney to start playing together again, they’d have to want it.

No Cities to Love, the band’s first album in 10 years, is what it sounds like to hear three of rock’s best musicians tearing through 32 minutes of wiry, but muscular punk songs, fueled by simply the joy of playing together. Plenty of bands have fumbled awkwardly at attempts to recapture something long since buried by time and distance, and a decade is plenty of time to see that disappear. Yet to hear No Cities to Love, you get the sense the three women in Sleater-Kinney never really let go of it; it feels every much a part of their incredibly solid discography as the six that preceded it (their self-titled debut feeling like a little bit of an outlier in context), overflowing with the big hooks and meaty riffs that have made the band essentially peerless since the mid-’90s.

In fact, it’s a big riff that opens the record — Brownstein and Tucker each feeding their guitars through octave pedals for a dense and thunderous start to “Price Tag.” In some ways it feels like a continuation of the noisy bombast of the Dave Fridmann-produced sound of The Woods, but No Cities finds the band working once again with longtime producer John Goodmanson, who sat behind the boards on records like Dig Me Out and One Beat. And though Sleater-Kinney sounds as loud as ever, there’s a kind of freewheeling punk sensibility to many of the songs, making it feel more akin to their Kill Rock Stars output than their pre-hiatus masterpiece. On the title track and “A New Wave,” Brownstein and Tucker show off the kind of tug-of-war guitar interplay that’s been a signature since their earliest days, and the dynamite “Surface Envy” finds the two guitarists milking as much sound out of their instruments as ever, still finding new sound configurations out of a deceptively simple set-up.

From note one, Sleater-Kinney are a force to be reckoned with, and that strength comes from playing on their own terms. Tucker even states as much during the chorus of “Surface Envy”: “We win, we lose/ Only together do we break the rules.” And on the roaring, visceral “Bury Our Friends,” Brownstein makes a similar declaration, singing, “Only I get to be sickened by me.” With outstanding tracks like the tense “No Anthems” or the heroic closing dirge “Fade,” however, it’s unfathomable that anyone would want to interfere with a creative force this formidable.

In late 2014, in an interview with NPR’s All Songs Considered, Janet Weiss expressed confidence and certainty in a continuation of Sleater-Kinney’s legacy: “I feel like there’s a lot left to do… and if we’re gonna do this, the three of us, let’s make it off the charts.” It’s an admirable goal, not getting together to play the hits (you’ll note there’s no Coachella date on their itinerary), but to make the best possible record they can. On No Cities to Love, Sleater-Kinney shoot for the moon, but sound like they’re having a hell of a lot of fun while doing it.