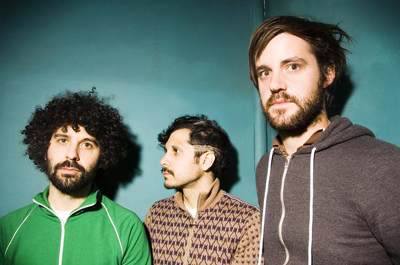 Okay, our bad. We’ve been sitting on a stack of singles and EPs for probably six months now and haven’t done much about it. We’ve finally found the time to devote to those bite-sized releases, however, and offer nine recent submissions of different styles, shapes, sounds and reactions, for that matter. In this batch, we have a few examples of both fantastic A-sides and B-sides. We also have some examples of up and coming talent with promising first offerings. Unfortunately, there were also some boring to terrible releases that made their way into the stack as well. Even with the aftertaste of some of the more displeasing EPs we’ve heard in a while, we’ve at least got some incredible outings to fall back on.

Considering Why?’s new album Alopecia is the Bay Area group’s best effort to date, it shouldn’t be much of a surprise that “The Hollows,” the first single off that album, is likewise one of the finest things in their entire discography. A melancholy, elegant pop affair, rather than an avant garde hip-hop composition, “The Hollows” shows Yoni Wolf & Co.’s true potential when it comes to pop songcraft. Added to the 12″ single is an album’s worth of remixes and covers, all of varying styles and quality, though their fractured nature makes them all a perfect fit on a Why? release. DNTEL’s remix of “By Torpedo or Crohn’s” is more interesting than anything on his last album, while Xiu Xiu’s cover of “Yoyo Bye Bye” would have fit in perfectly alongside any of Jamie Stewart’s warped drum machine symphonies, while even adding some accessibility and distorted beauty. Half-Handed Cloud’s take on “Pre-Teen Apocalyptic Film Acting (Medley)” is a little more bizarre and lo-fi, but not all that surprising given the artist in question. Boards of Canada’s remix of “Good Friday” begins with a long buzzing noise, leading one to wonder whether something’s wrong with the stereo, but soon enough a sexy, stoned funk takes over, making this version even better than the original. There are also radio edited versions of most tracks, which should prove helpful for college radio programmers, though for leisurely listening, Wolf’s obscenities are merely part of the colorful landscape. – Jeff Terich

From their beginning with first EP Jungles, Rahim has been a dynamic punk rock band with a lot of promise. And while their material has been consistently good, it hasn’t been without its limitations. The band consists of only three people, and on record, their approach is minimal to the point that they never sound like more than three people. That’s not a good thing or a bad thing, just a reflection of their stripped-down post-punk approach. With new single “The Same,” they reveal a newfound atmosphere, the kind that made later Unwound and Blonde Redhead such sonically compelling treats. The title track is mighty and sober, with simple, powerful strums in place of wiry, dissonant guitar riffs. With the perfect touch of bass and keyboard, the song becomes the most majestic and commanding thing they’ve ever done. B-side “When She Arrives” is similar, but with more space filling in between each minimally ringing guitar pluck. I’ve always believed in this band, and though I’ve never been disappointed, they’ve finally achieved a plateau at which they could be capable of something classic. – Jeff Terich

It’s a shame that post-hardcore is, for the most part, dead. There are a few bands here and there still keeping the spirit of Midwest and D.C. agit-punk alive, but most of those who were part of the movement in the ’90s have since moved on to other things. Balthazar de Ley, formerly of Hum, is one such musician, having moved away from Champaign style power-pop-punk to a strange, carnivalesque rock more reminiscent of Gogol Bordello or The World/Inferno Friendship Society. That said, it’s pretty awesome. His band, La Scala, plays a distinctly European-sounding approach to post-punk, with touches of his powerful, abrasive past converging with dizzying circus waltzes on “Bon Vivant” and classy, continental pop on “Parallel Lives,” which actually harkens back to early ’80s post-punk more than anything else. “The Harlequin” is spooky and alluring, like peak-era Pulp, yet “Draculina” is closer to a more abrasive, castanet-clacking Interpol. The Harlequin is a damn good introduction to this new, exciting band, and even more commendable is the packaging. Released as a seven-inch, The Harlequin actually comes with a CD version as well, with a bonus track no less. So while convenience is taken into consideration, sound quality is foremost, and no matter what, you can have it both ways. – Jeff Terich

Then again, there are bands like Damemas, who harness the fearsome power of Drive Like Jehu, The Jesus Lizard and many early ’90s Touch & Go acts in their beastly rock powerhouse. The group’s new three-song EP Let Your Tape Rock has enough fuzz and muscle to make up for the lack thereof in today’s indie rock scene, with songs like “Sickkid” practically choked with distortion to the point where coherence is an after thought. “Emulator” is a bit closer to The Cult, with a bigger stadium rock sound, and “Svengali Hold” is a streamlined punk rock anthem with a touch of San Diego hardcore for that added, vicious edge. “Damemas” means “give me more” in Spanish, and after hearing these brutal three songs, that’s really the only appropriate response, because three just isn’t enough. – Jeff Terich

The “Nights” in the title of Midnight Movies’ new six-song EP refers to “Nights in White Satin,” the Moody Blues hit that this Los Angeles outfit covers, not once, but twice, in both English and in French. Why that seemed necessary, I can’t say for sure, but they do a pretty decent job regardless. There are, however, some new originals on here, which provide something a bit more exciting. “Should Have Known” combines The Breeders’ scrappy pop with vintage Smashing Pumpkins riffage, yet “Stormy Eyes” has a spooky industrial crunch. Top it off with a pair of remixes, Nick Zinner’s taut reworking of “Souvenirs” and James Iha’s Depeche Mode style electrification of single “Patient Eye,” and you’ve got a pretty snappy EP, even if two versions of a Moody Blues song weren’t needed. – Jeff Terich

I don’t know anything about The Pains of Being Pure At Heart. They seem to take influences from such bands like Menomena and The Lighting Seeds, or at the very least, that’s what they sound like to me. The last (and best song) on the EP is called, well wouldn’t you know it, “The Pains of Being Pure at Heart.” I like that the subject matter of the song is so morbid. The band appears to be singing about dying, and the appeal to me is that the song, meanwhile, is so damn upbeat! Their matter-of-fact delivery and drum-inducing tale makes death seem like a pleasant stroll on a beautiful fall day. This five song EP is cheery and happy. Kip, the male vocalist in the band, has a calming and soothing tone, which makes for a nice contradiction against their upbeat music. Still, the EP is okay, but not great, though the group has enough promise to grow into something more impressive in time. – Ayn Averett

The Republic Tigers have a name that sounds best fit for a Communist baseball team (well, it is big in Cuba), but the Kansas City group offers nothing in the way of sports or political sloganeering. That’s all for the best really, as their real strength is moody, sweetly harmonized indie pop, something that sounds much more appealing in the long run. The group’s self-titled EP gets off to a strong start with “Buildings & Mountains,” its downcast strums and bubbly synths making for a lovely combination. “Sinkin’ Annie, Down, Down, Down, Down” isn’t quite as successful, not only because of its cumbersome name, but due to some vocal layering that wears out its welcome pretty quickly, and, for that matter, distracts from what would otherwise be a fairly catchy track. “The Drums” is light and breezy fare, but pretty good nonetheless, like a glitchy, Britpop Animal Collective, if that makes any sense. On the subject of Britpop, “Rollercoaster” reminds me of some ’90s British act I can’t put my finger on. Mansun? Gene? I’m drawing a blank here, but it’s not bad. The Republic Tigers are a talented bunch, there’s no doubt about that, and with a bit more restraint and a little less multi-tracking, they might emerge with something really awesome. – Jeff Terich

Switches – We Are Switches EP (Interscope)

Well, I guess England isn’t quite over the Strokes yet. Nor does it seem to have realized that Franz Ferdinand’s debut album came out more than four years ago. Then again, I guess that blame falls squarely in Interscope’s lap. In the first few seconds of “Lay Down the Law,” we get the effects-laden drums swiped from the intro to Tears for Fears’ “Sowing the Seeds of Love” followed by the lifted angular guitars from FF’s self-titled debut. The thing is, while the songs are just hitting US shores, they’ve been getting stale from two years of sitting on music store racks in the UK. This brash, but harmonic foursome combine aspects of the Strokes, FF, ELO (as in “Drama Queen”) and the actual Queen (as in “No Hero”), but all of it seems already dated, like hearing a Debbie Gibson single on a modern rock station. No doubt had we in the States been hearing this upon original UK release, we’d be `ooh-ing’ and `aah-ing’ along with the rest of the band, but instead we’re `ugh-ing’ and `sighing’ from music well past its expiration date. – Terrance Terich

Sigh…is this nü-rave or something? This hipster dance thing has gotten out of hand, if you ask me. Theoretically, all of the elements that make up a Klaxons or New Young Pony Club song should equate to something fun and interesting, but the execution often leaves something to be desired. Likewise, Wallpaper’s new EP T Rex just doesn’t cut it. I’m not sure if it’s supposed to sound ironic. Maybe faux Daft Punk glimmer and Roger and Zapp-isms are all you need to get a dancefloor moving these days, but this Oakland beatmaster seems trapped in an awkward, nostalgic purgatory. There is such a thing as too much vocoder, and Wallpaper reached his quota in “Evry Tm We Do It.” And for that matter any album with titles written in text message shorthand gets an automatic fail. – Jeff Terich