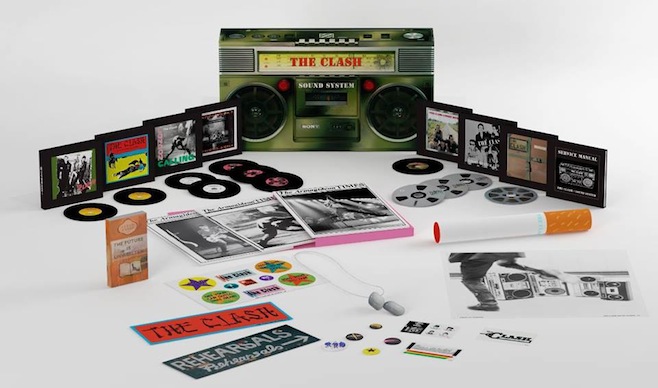 On Sept. 9 in the UK, and Sept. 10 in the U.S., The Clash will release Sound System, a new, huge box set that guitarist Mick Jones said to The Guardian is the “best box set ever.” He might be entirely on the mark here. The box is shaped like a boombox and was designed by bassist Paul Simonon. Check out the deluxe artwork above.

Included in the box are The Clash’s first five LPs — 1977’s The Clash, 1978’s Give ’em Enough Rope, 1979’s London Calling, 1980’s Sandinista! and 1982’s Combat Rock — but not Cut the Crap, which is the best choice for all involved. It will also contain singles, B-sides, rarities and demos. It will also come with a DVD of every Clash video, and “unseen footage by Julien Temple and Don Letts,” as well as reprints of the band’s Armagideon Times fanzine. There’s also a poster, stickers, dog tags, and what appears to be a giant cigarette (to roll the poster up in? Just a guess). Check the extra long tracklist here.

But that’s not all! On the same dates, The Clash will also release The Clash Hits Back, a double-disc, 33-track hits compilation sequenced almost in the same order as a setlist from Brixton Fair Deal from July 19, 1982, plus eight bonus tracks.