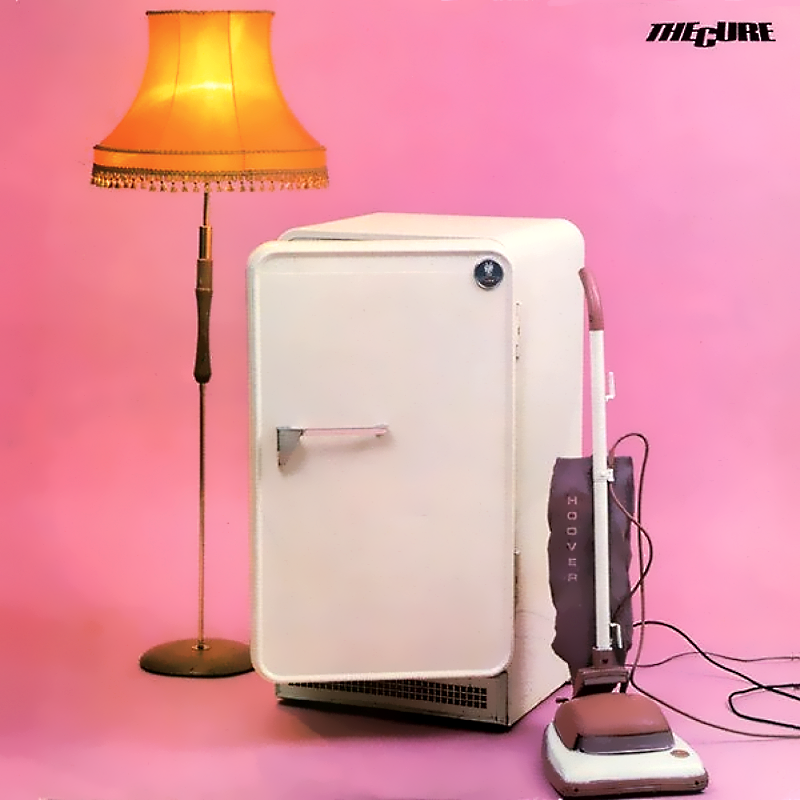 This should cheer you up for sure / See I’ve got your old I.D. / And you’re all dressed up like the Cure

Just over twenty-five years ago, an often mislabeled band was formed. One listen to the band’s debut from 1979 and you’ll wonder why The Cure were ever called `goth’. Three Imaginary Boys, long out of print in the U.S., has been given new life as the first of an entire series of Cure reissues. Reissue masters Rhino is at the helm and if every other album is treated in the same manner as TIB, then we’ve got a fun and interesting road ahead as the label releases follow-ups Seventeen Seconds, Faith and Pornography as double disc expansions.

Three Imaginary Boys is unlike any other Cure album. I was lucky enough to have the original vinyl edition of the album. Okay, so it was my sister’s and I listened to it when I got the chance, but it was still in the household. I was struck by the sound of the album at an early age. This album, along with other budding bands at the time, the Smiths, Echo & the Bunnymen, New Order, and Depeche Mode, opened up new worlds for me. They told me, as I listened through headphones with deteriorating ear pads, that it was okay to veer away from the top 40 radio hits to which other kids were listening. The first three songs on the album, “10:15 Saturday Night,” “Accuracy” and “Grinding Halt” were some of the best songs I had ever heard, and much to my amusement with the purchase of the reissue, still were. As a side note, I should warn everyone against listening to “Subway Song” alone in the dark on headphones unless you really enjoy having bad dreams and paranoia.

Because England’s music industry was, and still is somewhat, based more on singles than in the U.S., Three Imaginary Boys was without some of the band’s most popular songs recorded around that time, “Killing an Arab” and “Boys Don’t Cry.” Another successful single, “Jumping Someone Else’s Train” came six months after the initial album release, but is added as a bonus track on the second disc of the reissue. “Boys Don’t Cry” finds its way onto the reissue in two different formats, one as the album track which appeared on the U.S. version (reordered) of the same name. Fortunately for U.S. fans, this version contained all three singles, but at the expense of great songs like “Meathook,” which would later get a great cover treatment from Jawbox.

I only have a few small complaints about this reissue. I hesitated before I wrote that because, truly, this is a masterwork of a record and got great care and treatment from Rhino. Through the years it has been difficult to create something for Cure fans that wasn’t just a rehash of old stuff. The B-Side box set, Join the Dots was, for most Cure fans, including a friend of mine who bought the set for one, count `em, one song, nothing new. The second disc has 20 tracks, fourteen of which were previously unreleased, some of them stunning, some horrible home demo quality, and some just nice to have included in the set as a whole. The early demo version of “10:15 Saturday Night,” despite the poor quality sound, is remarkable and completely different from the finished product. The same goes for the demo version of “Boys Don’t Cry”. Although the music is dead on, Smith’s voice is much more relaxed and easy, sans the requisite whine that became the familiar signature of the tune. I was grinning from ear to ear upon listening to this particular song in the car. Some of the home demos have a distinctly different sound than the finished product.

You see, the man who discovered and recorded Robert Smith and the lads, Chris Parry, also founder of Fiction Records, honed the bands’ sound into an edgy, jangly, and sharp package. It could have been a byproduct of the fact that the Cure recorded late at night in the same studio that the Jam, another Parry discovery, was using to record All Mod Cons. Regardless, Three Imaginary Boys can now be looked at as a breakthrough record. So, my complaints, albeit small ones, are thus: the selection of some poor quality bonus tracks, forgiven for the fact that this is more of a historical document. The other is the exclusion of “Killing an Arab,” especially if the decision was made as a PC bow to 9/11. I thought we had all gone through that controversy before. Can’t we just accept that it’s a song based on a classic novel and move on? Since “Killing an Arab” was the band’s first single it is unlikely to appear as a bonus track on subsequent reissues. They had their chance and they blew it.

If you are a rabid Cure fan, you don’t even need to read this review and you probably already own the pink covered gem with the pictogram tracklisting on the back. If you’re a casual Cure fan and only have some of the more popular albums, know that this is an entirely different Cure, one that had a lot of talent and great post-punk songwriting before it found its footing for its own unique sound that was to come with gloomier follow-up albums. If you’ve never been into the Cure, this album will possibly surprise you and what a great chance to get in on the ground floor (twenty-five years later, of course!). Go ahead, see what all the fuss is about! Find out that the band isn’t really `goth’, that they’re a great post-punk or `alternative’ band that just dressed like they were.

I had been waiting for this first in the series of Cure reissues for a while, ever since they had been announced, and it was worth the wait. I am now salivating for the others to hit stores. Three Imaginary Boys holds a special place in my heart and memory, taking me back to the record player in my bedroom, listening to “Fire in Cairo,” “Object,” and “It’s Not You.” With the multitude of eighties wanna-be post-punk bands out there now, cashing in some of the sounds that the Cure created, the album is now more relevant than ever. Never has a song actually written about a dripping faucet in a kitchen sounded sweeter.