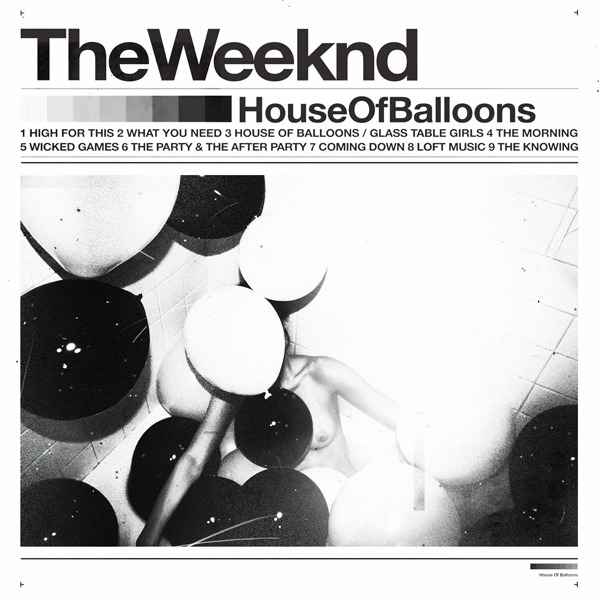 The language of Tumblr ‘n’ b, which I will not utter here, is all fastidious process, tweaking color and contrast to make new images. It’s a natural runner-up to chillwave’s woozy obsessions, which may already be behind us. On their recent remix of Nite Jewel’s “Am I Real” Classixx mixed straight to a cassette, which they defaced with dirt and a cigarette lighter before running it through Pro Tools and calling the whole thing “the TPS-L2 mix” after the first Walkman. That’s chillwave so utter it may have rendered all the rest of it irrelevant.

But this is just talk. Tumblr and r&b don’t really mix, quirky microgenres don’t last, and ultimately songs are all we have. This is why all your sneakily cool Facebook friends keep posting about The Weeknd; the songs are good and no amount of cheeky branding or anonymous esoterica should distract you from that. House Of Balloons is the music we said eight-year-olds in 2001 would grow up to make: something old, something new, and distributed free on the Internet.

Initially The Weeknd were supposed to be a Canadian collective, so five years ago we’d have known what they were up to. Now that Skins has a stomach-churning American edit and drizzly turnabout R&B is all anyone wants to make, the definition wasn’t so clear. Likewise now that we know it’s Abel Tesfaye, some 20-year-old from Toronto, it’s still sufficient to say whoever did this knows their Olivier Zahm, thinks Tyler the Creator is a real revolutionary, and Drake — well, he doesn’t want to talk about Drake. (I don’t either.)

If it sounds like I’m talking myself, let alone you, out of liking this project: let me be clear. I like it a lot. I think Bret Easton Ellis would, too (brb, checking his twitter.) If it makes me uncomfortable, that’s half the thrill. Because House Of Balloons is not easy listening, despite how you’ve been pandered to; there’s a lot to unpack and most of it is emotional wreckage. To make a reference that’s really relevant lately, some people think House Of Balloons makes you want to feel like a teenager, when it’s actually about the feelings of a real live emotional teenager. Think again.

For instance “High For This,” the cathedral-like opening cut, is moody and gorgeous and also definitely maybe about date rape (“we don’t need protection“; “come alone/ we don’t need attention“; “open your hand/ ake a glass/ don’t be scared“; “take it off/ you want it off” “trust me girl/ you wanna be high for this“). Or maybe it’s just really really seductive. I’mma go watch SVU and get back to you. All I know is it chills my blood just to hear it and the gristly sub-bass undertow makes the silky theatrics so much more next-level creepy.

Its logical footnote, “Coming Down,” alludes rather obviously to sex with a third party (“girl I’ve been bad again“; “the party’s finished and I’m alone“) that only makes you want your regular person. “I always want you when I’m coming down” is the most luxurious backhanded compliment any jilted lover never asked for. “What You Need” nicks Aaliyah’s “Rock The Boat” so its sheets are the dirtiest, duh. Aaliyah’s second life is extended beautifully; the track in its entirety has been massaged by remixers and ruminants already. On “Glass Table Girls” Tesfaye says “bring the 707 out” which is either a drum-machine cue or a curt nod to Sebastopol. There’s a video that steals scenes from Robocop and you’re on your own for the title, but the groove tools along nicely under a billow of drugs.

Drake approves of all this, natch. But don’t turn The Weeknd into another post-808s & Heartbreak article of no faith. Whereas How To Dress Well, for instance, falls apart under scrutiny, The Weeknd’s dark imagistic diffusion sounds way more like the method of modern love. Sonically it’s closer to the mesmeric twitch of post-dubstep twiddlers like Becoming Real or even, in terms of mood, the luminous chop & screw of Stalker tracks like “Heaven’s Gate.” With or without Beach House samples the songwriting is strong, criminally so for a noob not named James Blake. All of which is to reiterate that Tumblr ‘n b is not spoken here.