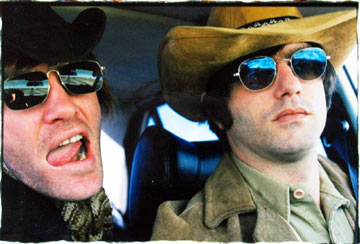 I had been meaning to watch Dig! for an extraordinarily long time. As the DVD screener sat on my shelf, my girlfriend and I would frequently say to each other, “hey, we should watch Dig! this weekend,” though ultimately not having the time to commit to its two-hour running time without sacrificing Gilmore Girls, Mythbusters or any number of other bits of televised candy. But as of this past weekend, perhaps not coincidentally, we sat down and took in the psychedelic, hilarious, tragic and ultimately thought-provoking rock `n’ roll documentary in all its promotional, additional feature-less and disclaimer addled glory.

For the better part of a year, there was something of a media circus surrounding Dig! including a promotional screening tour (which featured a stop at the Coachella Valley Arts and Music Festival), endless glowing reviews, an MTV2 Subterranean episode focusing on the film (with The Dandy Warhols’ Courtney Taylor-Taylor guest hosting) and, of course, the Sundance Grand Jury award for Best Documentary. All of this could lead one to believe that any of these accolades amounted to little more than hype, but in my own personal screening, paired with a hefty bowl of popcorn and some sparkling cranberry juice, I discovered the wonderment and ridiculousness of the film and its two central subjects, The Dandy Warhols and The Brian Jonestown Massacre.

Dig! documents seven years in the careers of both the Dandys and BJM, starting with BJM’s impressive three-album output in 1996 and The Dandys’ signing to Capitol Records. At the time, filmmaker Ondi Timoner was putting together a fluffy bit of “up and coming artists” footage for TV screening, though the project eventually evolved into a much larger undertaking, thanks to the underwhelming nature of the other, unnamed, bands that were originally involved and the larger-than-life personalities and antics of the two bands that eventually became the film’s focus. And more so than being about the bands on the whole, Dig! is essentially about Anton Newcombe, frontman for the Brian Jonestown Massacre, his own personal demons and the ensuing rivalry that began between the two bands.

In 1996, both The Brian Jonestown Massacre and The Dandy Warhols were promising acts, each with their own exciting take on psychedelic rock and personalities that spoke almost larger than their songs did. While The Dandys were the more sugar-coated and commercially viable of the two, BJM were the critics’ darlings, universally declared artistic geniuses, even by Courtney Taylor. At the outset, The Dandys weren’t even part of the initial concept, though became involved thanks to Anton Newcombe’s suggestion that they be given some attention. Of course, this is where things start to go south. As BJM is beginning to receive critical success, they are invited to play an industry showcase at Sunset Strip’s Viper Room, during which a drunken Newcombe lashes out against his bandmates and a fistfight occurs, basically halting any chance of commercial deal from that particular showcase.

Meanwhile, The Dandy Warhols are in the middle of recording a debut for Capitol, which the label rejects, asking “where are the songs?” Taylor, ever the humble artist, recounts the encounter, admitting that he snottily told the executives, “I sneeze and hits come out!” But this is only the beginning of the rocky label relationship (which, as of yet, is still active), as poor record sales, a lack of hit singles and half a million dollars spent on a David LaChapelle-directed music video eventually made tensions between the band and their label grow larger over time. The band, however, managed to keep it together, though original drummer Eric Hedford was ousted, as he requested a higher cut of songwriting royalties. Though we don’t hear his side of the story, Taylor seems somewhat arrogant in his reaction to the request, stressing how he does 100% of the songwriting and is “generous” enough to give up half of that to the band. There’s probably a lot of truth in that. Still, Hedford disappeared rather quickly in the film’s sequencing.

In the meantime, Taylor and Newcombe further distance themselves from each other, taking jabs at each other in song. Taylor pens “Not if You Were the Last Junkie On Earth,” partly aimed at Newcombe’s herion use. There’s a particularly poignant scene where Taylor plays a cassette of the song for Newcombe, who in turn says absolutely nothing. The lack of communication between the two is unnerving, though when Newcombe, in turn, plays “Not If You Were the Last Dandy On Earth,” a similar-sounding tune that jabs back at the Portland group, for Taylor, he laughs it up and can be seen mouthing the words “you asshole.”

The difference between the two bands lies in their view of success. The Dandys willingly take on the task, ultimately succeeding in a global musical atmosphere after a struggle in their American home. The Massacre, on the other hand, has several shots at success, all of which end up sabotaged by Newcombe’s erratic behavior, irresponsibility, aborted tours, band in-fights and overall unpredictability. Other than that, however, the two bands are more similar than different. Both have a penchant for playing `60s-inspired psych-rock, both are helmed by egocentric songwriters and both consume a fair amount of drugs and alcohol. The Dandy Warhols disapprove of BJM’s members’ heroin use, though the Dandys themselves prefer cocaine, not coincidentally, a rich man’s drug.

While the film is long, there is still a lot that hasn’t been answered, particularly taking into account that the film was finished two years ago. Many of that can be summed up on the DVD bonuses, all of which didn’t come with my copy. Damn! However, Newcombe, himself, was unhappy with the film, citing it as one-sided and incomplete. To be fair, it was narrated by Taylor, giving his band the “good guy” side of the plot. Though, on a personal note, one of my friends interviewed him in college, discovering that the Warhols frontman is no less off his nut than Newcombe, just not as volatile. Furthermore, the BJM story seems to end in 1997, only touching upon their continuing story with a mention of Newcombe’s son (whom he’s not allowed to visit) and a confrontational show at the Troubadour. According to Newcombe on the Brian Jonestown Massacre website, he’s been heroin-free for five years and has been continuing to put out music and tour, eventually settling into a long-term, stable music career. And one interesting fact left ot of the film was that the marijuana that was found in BJM’s van in Georgia actually belonged to Timoner. I guess even the director needs a little something now and then.

I don’t doubt that Newcombe has mellowed considerably since the filming of Dig!, nor do I doubt that there were plenty of times that he was perfectly candid and personable. He became good friends with the likes of Elliott Smith and Lilys frontman Kurt Heasley, cultivating something of a community among artists, as many people within BJM have gone to create other great musical works. In total, there have been 40 members of the Brian Jonestown Massacre, off and on, leaving great opportunity for extended offshoots. But the fact remains that Newcombe had, and will probably continue to have, personal demons that may have interfered with his success. This was a man who didn’t have much of a family growing up, yet received endless support from his peers and only heard his band referred to as “brilliant” or himself referred to as something of a God, mentioned in the film within the same breath as “Jesus” and “Hitler.”

Whether or not this film is fair is up for debate, but it’s an extremely entertaining and well-made film, with incredible photography, a compelling story and a hip, built-in soundtrack. I still wish I could see those extras, but one thing that certainly wasn’t captured on the extra DVD was something I witnessed firsthand at a Lilys show two years ago, where I was working on Treble’s first ever feature story. Anton Newcombe was attending the show, supposedly to record the performance, and acting somewhat erratic as usual, making frustrated faces and cursing his equipment, though this was a remarkably less violent and frustrating Newcombe to be around than the one seen in the film. He did, however, bring along his plush Ernie (of Sesame Street) doll, for the ride. And when he received his handstamp from the doorman at the Casbah, he insisted that Ernie get one too. If only Timoner captured that moment on tape…