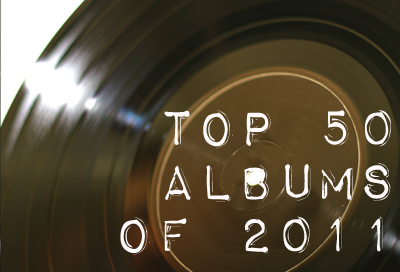 The qualities that make a good album are generally different than those that make a good song. Sure, good music is good music, and a great album needs great songs, but it also needs something extra. Cohesion, usually, and if not that, a long supply of intrigue or suspense. It should take the listener on a journey, or provide a compelling narrative. It should work well as a series of songs in a sequence, or unfold in a way that reveals new and interesting things to the listener. And, failing all of these, it should at least be highly entertaining.

Our Top 50 Albums of 2011 cover all of these qualities in some form or another, and they’re definitely all highly entertaining. So here they are; enjoy the list.

A band’s name usually has little bearing on its sound. Unlike the title of a book or film, you can’t often tell much about a music group by its moniker. But Cults may be the most appropriately named band in a very long time: Their music is so catchy, the listener can’t help but feel as if she’s being brainwashed. Cults’ self-titled first album starts off with the one-two punch of the perfect little pop songs, “Abducted” and “Go Outside.” Those are followed by a steady of stream of tightly crafted, girl-group inflected, mod style songs, buoyed by the innocent crooning of singer Madeline Follin. Cults have only been a band for about two years, and their debut seemed to come out of nowhere. With melodies like this though, it’s not hard to see why they’ve charmed so many so quickly. All hail the leader. – Elizabeth Malloy

Florence and the Machine may get all of the airplay and press, but Canadian trio Austra will give you more bang for your buck. On their debut album Feel It Break, bandleader Katie Stelmanis helps them split the difference between Florence Welch-like operatic vocal atmospheres, and emotional synth-pop that lands somewhere between Ladytron and Ladyhawke. Big single “Beat and the Pulse” finds them capable of abstract grooves, while songs like “Shoot the Water” and “The Beast” are theatrical and spare. Simultaneously gothic and peppy, Feel It Break is a little album that could from a band kinda out of nowhere. – Adam Blyweiss

Even with the globalization of music and the prevalent cross-pollinating of genres, Eye Contact is a mysterious, practically unidentifiable beast. Gang Gang Dance— who has never exactly been shy about genre-bending — took bits and pieces of styles from all over the globe, produced them largely with spazzy synths and meshed them with dark, early 4AD-inspired synth pop and funk. In short, Eye Contact literally is all over the map. Amazingly, Gang Gang Dance have taken all of these disparate pieces and created an utterly unique but unified whole, one that shows just how elastic the band can be. Sure, listening to Eye Contact can be a disorienting experience, but they offset the dizzying array of sounds with plenty of off-kilter pop melodies. The results are spellbinding; I may not know exactly what I’m hearing at any given moment but I know I want more of it. – Chris Karman

Wooden Shjips marked their Thrill Jockey debut with élan and assuredness. Improving on the spacey psych garage sounds of 2010’s Vol. 2, West coolly surfs an erstwhile formless organ’s drone, ascribed a pace by tempered beats and über cool guitar riffs, crackling with static and awash in reverb. Each song sets out its stall in a space, before swelling to fill and surpass it, leaving this album sounding like the Great Sound-Check in the Sky. The riffs’ insistence gives the impression of momentum, while peripheral trickery sends you spiraling off into the extremes of orbit. Wooden Shjips aren’t reinventing the wheel so much as exploring different ways to color-in the carousel. Music to travel-by…whether you’re moving or not. – Chester Whelks

Wesley Eisold is full of surprises. The garage/bedroom auteur first grabbed listeners by the ears (and balls) as part of Southern California hardcore destroyers Some Girls, while songwriting partner Dominick Fernow assaulted listeners under the Prurient moniker. Then came Eisold’s first Cold Cave album Love Comes Close, gothtronica with enough unique anger and purposeful imperfection to keep things interesting. It left us not completely prepared for Cherish the Light Years, Cold Cave’s sophomore effort. Between Eisold’s heavily affected vocals (“Pacing Around the Church,” “Burning Sage”), his selection of pulsing keyboard riffs (“Confetti”), and bracing and staccato rhythm tracks (“The Great Pan is Dead,” “Alchemy and You”), it’s a wayback-machine vacation to the England of Bauhaus, Joy Division, and New Order Mk. 1. – Adam Blyweiss

While watching Zola Jesus for the first time at SXSW this year, I was struck by how such a petite singer could emit such superhuman sound. Nika Roza Danilova, the young Los Angeleno behind ethereal goth-pop outfit Zola Jesus, previously established herself as a darkly operatic specter on a pair of outstanding EPs in 2010, but with new full-length Conatus, those gilded pipes of hers found a suitably enormous and surprisingly danceable companion in Brian Foote’s production. Conatus is a discotheque in a cathedral, or space travel via electronic beats across emotional pathways. Eerie, stylish and immense in every possible way, this is the collision point between sleek and emotive. – Jeff Terich

Apokalypsis is poised to become our generation’s great record. Or at least it should; there is much room for doubt. You see, every generation gets itself wrong. For instance, the Boomers thought themselves great cultural liberators only to end up the tyrants. Now the Millennials feel very much the same way, the difference being that circumstances have rendered the perks of Boomer tyranny – retirement and death with dignity for starters — little more than fables of a made-up age. And yet we are preparing ourselves for just such a life, branding acts like Feist as the “new adult contemporary” (apparently not a term of insult), who are meant to soothe us as we age and reinforce the notion that our lives had meaning as we die. The perpetuation of such a grand delusion seems to reinforce my point, that what we deserve, nay, what we need is tundra, not the open road; melancholia, not The Big Chill; Chelsea Wolfe, not Feist. Apokalypsis is a folk-rock black mass, upturning all the accepted traditions of the genre to create something that, to be sure, is perverted beyond measure, but also very beautiful and very honest. Her ghostly voice, enigmatic lyrics, foreboding melody and frantic rhythms beckon us very appropriately from beyond our horizon, the other side of which contains the open pit where we will sleep a very peaceful but desecrated sleep. – Chris Morgan

43. Mogwai – Hardcore Will Never Die, But You Will (Sub Pop)
Buy at Insound

I once met a man from Scotland who told me that he was nearly the drummer for Mogwai, way back when, but he turned instead to shilling for high-end whisky. To the authenticity-obsessed indie freaks this would seem to be a failing of sorts, a grand selling out. But for a seasoned overthinker like myself, the two aren’t that distinct. Most rock bands have simple booze counterparts, as their fans drink accordingly (Creed = Coors Light; Foo Fighters = Peppermint Schnapps; Kyuss = boiled, over-the-counter cough syrup), but Mogwai, being a rarefied band, deserves a rarefied comparison. Indeed, what other item in the universe can really match Mogwai’s unique brand of intensity, complexity, sophistication and lack of pretension quite like a stiff drink of single-malt scotch whisky? With Hardcore Will Never Die, this is especially pertinent, given that they’ve regained surer footing in balancing their complicated palette. Nothing bends too explicitly to the overly melodic, the overly loud or the overly weird. Everything is arranged just so, each new taste coming and going in perfect sequence, some of it very strong (“George Square Thatcher Party”), some of it very subtle (“Too Raging to Cheers”), and some of it simply intoxicating (“White Noise,” “You’re Lionel Richie”). It’s not an easy drink, to be sure, but it’s worth the effort, the patience, the burn and even the headache. Especially the headache. – Chris Morgan.

42. The Pains of Being Pure At Heart – Belong (Slumberland)
Buy at Insound

The western world has an unhealthy obsession with adolescence. It’s a short period of your life, and generally not a great one, but sometimes it feels like the entertainment industry revolves around it, peddling disposable heartthrobs to actual teenagers, and nostalgia about those supposedly golden glory days for the rest of us. If more of the Teenage Industrial Complex was like the Pains of Being Pure at Heart’s second album, Belong, this wouldn’t be so bad. The songs remind me of the better times of teenage life: Hanging out with friends, driving with nowhere particular to go, those first inklings that a crush might like you back. All these moments are tinged in melancholia — eventually you have to go home and finish your homework – but they are great while they last. That’s what makes the shining pop of Belong so perfect. The bittersweet shoegazer gauze that washes over all of it grounds it in reality. High school is a terrible place to live, but when done right, it’s not so bad to visit sometimes. – Elizabeth Malloy

41. Washed Out – Within and Without (Sub Pop)
Buy at Insound

File this under Musical Questions You Never Really Pondered: What if someone sang over the music of Boards of Canada? Yes, Solange Knowles and Weird Tapes both sampled the legendary Scottish soft-electro duo in 2008. Yes, they’ve been Internet mashup material off and on for years now. Yes, I suppose you could technically call the loops in “1969” and “In a Beautiful Place out in the Country” a form of singing. I’m really talking about someone laying down vocals over a substantial amount of old or—be still my heart—new BoC material. Of course, Atlanta’s Ernest Greene isn’t doing that on Within and Without, his debut LP as Washed Out. Yet his brand of chilled-out synth-pop often sounds like what that collaboration could be. Pinging old keyboards, warm and wobbly loops — they weave in and out of his breathy echoes on “Amor Fati,” “Eyes be Closed,” “Far Away,” oh hell, it’s probably three-quarters of the album. And when Within and Without doesn’t sound like that, as on “Soft,” it’s peaceful yet percolating enough to make you ponder further: Boards of who? – Adam Blyweiss