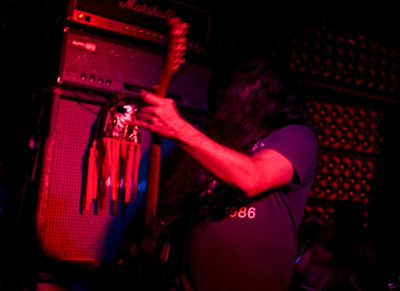 Torche has the distinction of being referred to as a `metal’ band, which is true in some respects. Their urgent, loud riffs are marked by a decidedly metal-sounding C-sharp tuning. Their long-maned guitar player looks like he could have stepped out of Slayer (though his telling grin reveals that he’s having way too much fun). And everything they do is extremely heavy. But if you want to split hairs, Torche is more of a rock `n’ roll band than anything, placing a higher priority on hooks than chugging dirges or operatic flights of demonic fancy.

In a live setting, however, Torche combines their heavy metal chug, their rock `n’ roll hedonism, and some punk rock energy, culminating in one of the most intense and fun live dynamics one could experience. Guitars buzz and blaze, setting fire to the stage with manic energy and solid focus. At no time does the band indulge in “Stonehenge” style props or narratives, however—Torche is all about injecting their audience with as much riff-rocking action as possible in the time allowed. In just one half-hour, this Florida-based hurricane of distortion and melodic bellows charged through a dozen songs. Name another metal band, barring any grindcore acts, that can boast that kind of efficiency.

Largely pulling material from new album Meanderthal, Torche put on a show that had the uncanny ability to both stun and pummel the audience, and it’s safe to say the four-piece powerhouse successfully pulled off both. Revving up melodic standouts like “Healer” and “Grenades” one moment, and speeding through “Pirana” and “Speed of the Nail” the next, Torche left little time for breaths between their urgent assault. While their warp speed approach may have initially been overwhelming, it took little time to adjust and be won over by such a high-energy and hook-laden set. In fact, if there’s any complaint to be had, it’s that it was over way too soon.