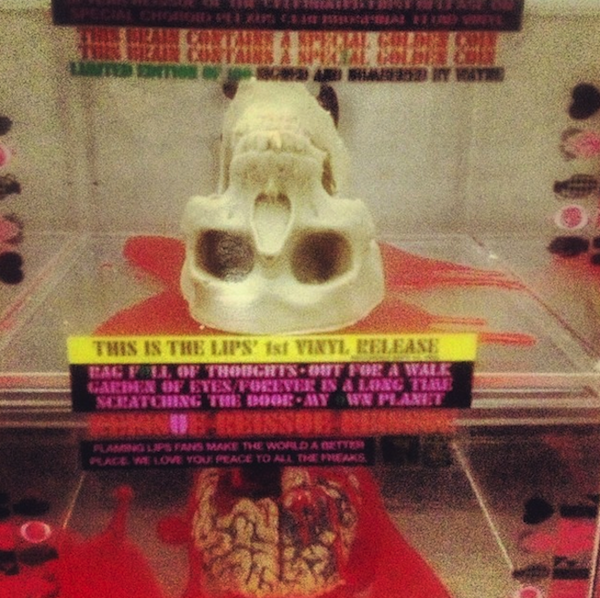 Flaming Lips fans, get ready for the Wayne Coyne Record Store Tour 2013. That’s right, the frontman of Oklahoma’s most famous psychedelic alt-rock band is embarking on a tour of record shops in the Midwest/South to meet and greet with fans, sell special-edition reissues and repressings of catalog material from the band’s early years, some of which come in characteristically strange packaging.

In particular, the band has issued a new reissue of their 1984 self-titled debut EP, which comes encased in a life-sized, chocolate skull (as seen above). The press release for the reissue states that it’s a “hand-crafted, custom-made… anatomically correct and life-sized” skull made of gourmet chocolate. There will also be a special gold coin inside the skull, which can be redeemed at any show headlined by The Flaming Lips. So it’s only a matter of time before the band covers “(I’ve Got a) Golden Ticket” from Willy Wonka and the Chocolate Factory, eh?

Coyne will also sell cassette copies of the band’s 1983 demo, and both releases will be available until Dec. 24 at participating shows, limited to 2,000 copies each.