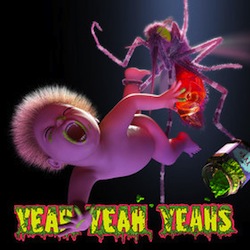 Ten years later, it’s safe to say that “Maps” wasn’t a fluke. The Yeah Yeah Yeahs’ runaway hit from 2003’s Fever To Tell, “Maps” displayed a side of the New York City group of which the noisy scuzz punk of their earlier EPs gave scarcely any indication. Not that that album — or 2006’s Show Your Bones or 2009’s It’s Blitz! for that matter — didn’t have some suitably skronky scuzz punk of its own. But with “Maps” as a guiding light, Karen O, Nick Zinner and Brian Chase began to focus more intently on sharpening their hooks and shaping their pop sensibility, delivering a consistently affecting and often soaring set of singles like “Cheated Hearts,” “Turn Into,” “Zero” and “Skeletons.” The road from art punks to pop dynamos, for the Yeah Yeah Yeahs, turned out to be a reasonably short one.

Then came “Sacrilege.” Released earlier this year, the band’s first single from fourth album Mosquito served to highlight some even loftier ambitions for the Yeah Yeah Yeahs. Slowly and carefully unfolding with ominously funky bass and Karen O’s alternating sweet and irreverent narration of bedding an angel (“Fallin’ for a guy/ Who fell down from the sky”), it grows more intense by the moment, climaxing with a gospel choir to sing the song out in a callback to The Rolling Stones’ “Gimme Shelter.” It’s a huge song, eschewing subtlety for something that aims high — high enough to canoodle with seraphim. If the Yeah Yeah Yeahs conquered pop perfection on their past couple of records, it seems that now they’re in the market to become Rock Gods.

Placed conspicuously as Mosquito’s opening track, “Sacrilege” is a pretty high bar for the rest of the album to clear. And for the level of drama it contains, and the amount of tension it builds and breaks, it would do just as well as a closing, or penultimate track. It doesn’t doom the album, but it does leave a lot to live up to. The Yeah Yeah Yeahs aren’t exactly neophytes, and there’s a lot to love about Mosquito (assuming we ignore its hideously tacky cover art), but it’s a surprisingly low-key record for a band making its way toward Valhalla.

Atmospheric ballad “Subway” immediately follows “Sacrilege,” and it presents a cool, dreamy counterpoint to the album’s explosive opening. O sings “I lost you on the subway car” over click-clacking train-track percussion, with a softly glowing synth fog billowing underneath. The conga percussion and funky bassline of the title track builds up the energy again, which continues on “Under the Earth,” a cool highlight that pulses with (literal) echoes of dub and an exotic synth hook. Meanwhile, “Slave” is the rare track that achieves the kind of drama and intensity that “Sacrilege” does, gradually creeping up to become one of the most hypnotic rockers on the album.

Some of the artful developments on the album’s first half start to fizzle on side two, as when the band drops nuance in favor of alien-themed sleaze rock on “Area 52,” and invites a guest rap from Dr. Octagon (which I’ll admit, sounds pretty cool on paper) on “Buried Alive.” And while the songs that follow don’t make the same mistakes of this odd midsection, they don’t reach the same heights as the heavily loaded first half, either. The lesser songs on Mosquito aren’t necessarily missteps, they just don’t make that much sense in the context of an album that favors careful craftsmanship over immediate, and sometimes silly, gratification. But then again, even the Stones aren’t above a little frivolous indulgence. Perhaps deification in the Yeah Yeah Yeahs’ case is a little premature, but getting there isn’t likely to take very long.