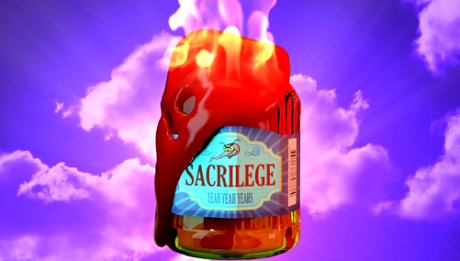 It may seem a little too clever by half to prominently feature a gospel choir in a song titled “Sacrilege,” but the Yeah Yeah Yeahs go well beyond an ironic wink in the new single from their upcoming album Mosquito. The band has long been on an artistic upswing since the release of their debut album Fever to Tell, with the arc of their career bending toward the soaring and mighty. Show Your Bones broadened their palette, and It’s Blitz! found the NYC trio embracing greater textural diversity, but based on “Sacrilege,” there’s a lot more in the band’s arsenal than they may have initially let on.

The subtle buzz of bass in the song’s first verse, sliced through with Karen O’s inimitable shriek, is an early tension that grows more taut as the song draws on. Brian Chase kicks in with some superbly heavy drum beats, and Nick Zinner opts for some Keith Richards-esque guitar noodles that, while subtle, amplify the song ever gradually. Strings come in. The bass grows deeper. Oh, and then that gospel choir breaks through, adding a soulful hugeness to a track that only gets bigger with each measure. For a band that’s effortlessly made big music with minimal means, with “Sacrilege,” the Yeah Yeah Yeahs leap to a new level, and then another, and then another.

[found on Mosquito, Interscope; out April 16]