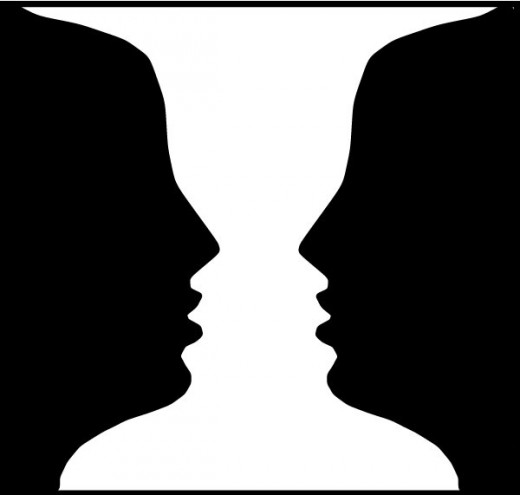 Sometimes the best album covers are those that require a second or third look. Album art that aims for optical illusions can sometimes be corny, and surrealism can often go awry (see: any prog rock album released in the last 40 years). Yet some of the coolest album art of the past 30 years has involved imagery that tricks the eye, or is best left up to the viewer for interpretation. Here are ten albums whose covers could launch a thousand thinkpieces.

Almost all of the Cure’s albums from the ’80s relied heavily on abstraction and ambiguity in their artwork, but this one still baffles me. A bird attacking some guy’s face? Magic show on acid? Who knows.

Ministry – The Land of Rape and Honey

Ministry have had their share of interesting album covers — flag-waving dude covered in blood, an x-rayed skull — but this one is the most confusing upon first look. It’s, however, much more disturbing once you know what it is. Per Wikipedia, this distorted, purple blur is, in fact, an electronically processed version of a photo of a burned corpse in the Leipzig-Thekla subcamp of Buchenwald. Yikes.

A good number of albums in the 4AD catalog have artwork containing images that aren’t easy to make out on first glance, though this one is definitely among the weirdest. It appears to be a man doing a dance with snakes, eels or bananas. Or giant pea pods? Supposedly the subject of the photo is actually longtime 4AD album designer Vaughan Oliver, though what he’s doing is up for debate.

Slowdive – Just For a Day

You can probably count on one hand (maybe two) the number of shoegaze albums that don’t employ some sort of out-of-focus or blurred image on their covers. Still, some are easier to make out than others. The photo on the cover of Slowdive’s debut album doesn’t necessarily require any hints or a roadmap to decode, but it might take a glance or two for you to make out the woman twirling her skirt.

Admittedly, possessing a vinyl copy of Goat will help to make the cover illusion easier to see, but at first glance it sorta looks like spaghetti or something, rather than flames projected on a topless woman’s chest. Trippy.

I spent years staring at this thing without having the slightest idea of what, exactly, I was looking at. A tank? A guy with a sledgehammer? Shit blowing up? It’s even more confusing when you look at a cassette copy, and yes, the first copy of Meantime I owned was a tape. What’s really happening is a guy in a protective suit using a shovel. I think.

Agalloch – Ashes Against the Grain

Portland folk metal band Agalloch frequently opt for stark, chilling imagery for their albums, which match their dark, haunting dirges perfectly. The band released two album variants for 2006’s Ashes Against the Grain, neither of which is easy to decipher, though the one seen above is a little more curious than the bird-like charcoal sketch more commonly distributed. At first it sorta looks like a guy with his arms outstretched, screaming. But turn it upside down and it makes more sense — it’s a bird.

Here’s a cool one. Timothy Saccenti’s art for Flying Lotus’ Los Angeles has an almost insect-like quality, so don’t be surprised if it reminds you of the beetle on the cover of Massive Attack’s Mezzanine. It could also be stretched plastic, a guy in a weird bird suit… any number of things. In actuality it’s just an amorphous abstract sculpture, so much like other works of abstract art, what it resembles is largely up to the person viewing it.

Some images blow your mind once you realize what you’re looking at. To wit: Gang Gang Dance’s Eye Contact. What immediately looks like some kind of perfectly captured still image of a splash of liquid, after a few seconds, begins to come into focus as an even weirder and perhaps more impressive capture: a bug, covered in beads of water, on top of a flower.