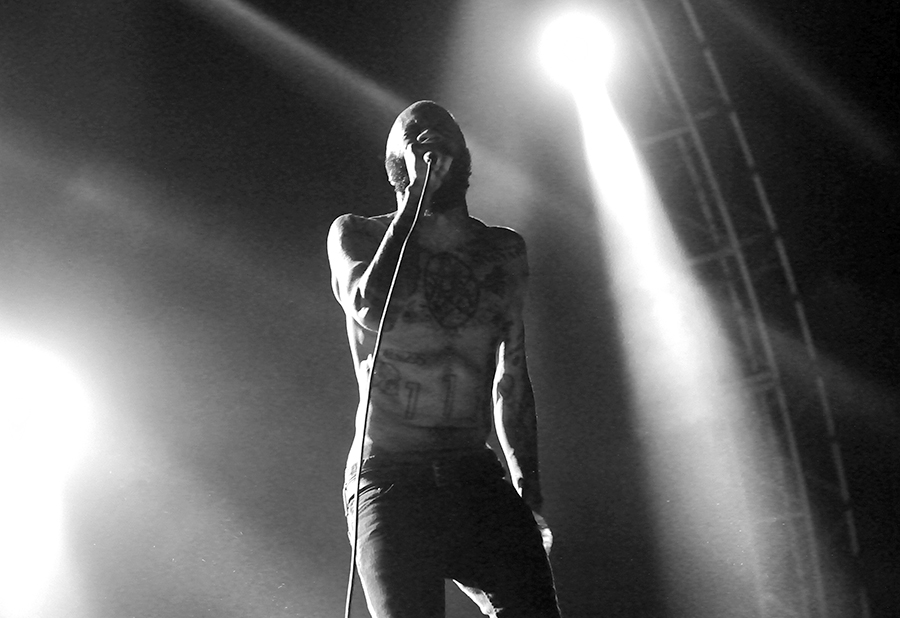 For the last couple years at least, noisy, chaotic hip-hop records have been dominating the conversation. But it’s not as if industrial hip-hop was born with Death Grips or Kanye West. No, in fact, way back in the ’80s, artists were blending hip-hop beats with menacing, destructive sounds. Sometimes it turned out funky, other times it was downright terrifying, and most of the time it involved radical political statements, but it was almost always interesting and innovative. We decided to take a look back at some of these noteworthy, ear-shredding releases, with our 10 essential industrial hip hop albums. Have fun, and bring earplugs.

Mark Stewart – As the Veneer of Democracy Starts to Fade

Back before The Roots collaborated with everyone and your sister, the house band of nascent New York rap label Sugar Hill Records — including eventual electro converts Doug Wimbish and Keith Leblanc — were invited to collaborate with British art punk Mark Stewart. The once and future lead singer of The Pop Group was dabbling in the dub alchemy of On-U Sound at the time, and with his confrontational, socially-conscious style of performing and producing he cut, retouched, obscured, or scorched everything Sugar Hill brought to the studio. Veneer of Democracy is not just an album where industrial cognoscenti can swear fealty to fearsome sampledelica and screaming guitars. The tinny drum machines, shards of spare electronic funk, and gritty spoken word all heard in the chaos combine to serve as the foundation for a range of music able to encompass both “The Message” and “Down in It.” – Adam Blyweiss

Should anyone make the mistake of thinking that Michael Franti was always mired in granola reggae rap overflowing with peace, love and all that, I’m here to disabuse you of such a notion. In the 1980s, Franti fronted noisy, chaotic industrial rap troupe The Beatnigs, whose name, admittedly, is far less commercial than, say, Spearhead. Likewise, their music brought a particularly complex mixture of rap, spoken word, jazz, hardcore punk and industrial, blending together in a dark, abrasive soup of distortion, leftist politics and righteous catharsis. The Bay Area group found a strange cross section of Public Enemy, Meat Beat Manifesto and Bad Brains in their brawny assault, and it hit hard from all angles. It’s remarkable how ahead of its time their self-titled debut (and only album) is. It’s maybe not as ear-shredding as Death Grips, but listening to the distorted bass and flashy synths of single “Television” (later reworked by Disposable Heroes of Hiphoprisy), it’s clear where the kernel of that group’s anarchic approach was planted. – Jeff Terich

Unflinchingly socialist at a time when radical politics were just re-entering music’s mainstream, this American trio assembled harsh and hidden social realities, a self-critical eye, and notorious fan participation using cut-and-paste propaganda as epoxy and earnest rhyming as catalyst. Prior albums like Friendly Fa$cism may have won Consolidated critical acclaim, but it was this third release that put them on a larger map. Granted, their biggest hits were the songs that needed the most help: San Francisco novelty act The Yeastie Girls rapped out the cult hit/dirty little secret “You Suck,” celebrating cunnilingus as feminism, while Paris spit hot fire on the black-on-white revenge fantasy “Guerrillas in the Mist.” However, Play More Music also showed an almost pastoral side to Consolidated on songs like “A Day on the Green” and “He,” even as they continued to boldly toss around talking points on veganism, the war on drugs, and a rampaging corporate state. – Adam Blyweiss

The British duo of Jack Dangers and Jonny Stephens grew from side project to ongoing industrial-music concern due in no small part to shifting their focus to America. The late 1980s saw them move to San Francisco (associating themselves with like-minded artists including Consolidated) and hook up with Chicago’s legendary Wax Trax! label. Already thick with mass media samples as well as the noises of No Wave and jazz, on Satyricon their takes on dub and cracked hip-hop instrumentals embraced melodic electronica as well. With its release at the start of the big beat techno era — and within a week of Play More Music — it brought the band a level of exposure they wouldn’t see again until a slot on the soundtrack to The Matrix. The vocal tracks on here include politically aware rapping (“Edge of No Control,” “Son of Sam”) and third-eye singing (“Mindstream”) as well as material that falls somewhere in between (“Drop,” “Original Control”). Don’t let that disqualify Satyricon from this list; Drake mixes up a similar “rap” recipe on his albums, right? – Adam Blyweiss

Having been the drummer for grindcore band Napalm Death, Mick Harris was already well-versed in the sonic vocabulary of dread before spinning off this dark beats project at the start of the 1990s with fellow ND members Justin Broadrick and Nic Bullen. They left Harris to his own devices after a few releases, and Gyral finds Harris coming into his own on many levels. Prior albums like Evanescence had a bunch of echo-chamber vocals that belied his roots and betrayed any pure hip-hop feel in the music; the rather good remix set Ellipsis by definition relied on other artists to focus attention on the beats. Gyral is one-track-minded without being one-note, a cluster of eight epic statements made with crushingly sad atmospheres and deliberate drum breaks. You can call these industrial hip-hop beats “dark ambient” or “illbient” if you wish. It doesn’t necessarily matter what they are; what they do is extend the Wu-Tang Clan’s nightmare scenarios, form a template for the left-of-center beats Kanye West would eventually favor, and prepare us for other grand statements by the likes of J Dilla, Madlib, DJ Shadow, and Teargas and Plateglass. – Adam Blyweiss

Techno Animal – The Brotherhood of the Bomb

The British production duo of Kevin Martin and Justin Broadrick brought together experience in industrial metal, post-metal, grindcore, and jazzcore to create genre-warping hip-hop beats. Heavily influenced by acid-house and industrial electronica, the instrumentals on The Brotherhood of the Bomb stomp forward at a rap-friendly pace, built around striking arrangements of unsettling noise and rattling bass. To top it all off, the strong production is paired with an excellent cast of featured emcees — dälek, El-P and Rubberoom, just to name a few.  The Brotherhood of the Bomb made a mark in the established, if deep underground realm of industrial rap, and set a new standard for artists to come. – A.T. Bossenger

New Jersey’s most abrasive hip-hop duo, Dälek, carved a unique niche for themselves on their darkly captivating debut EP Negro Necro Nekros, and brought in even more noise into the frame with 2002’s From Filthy Tongues of Gods and Griots. But no album in their catalog tops 2005’s Absence for sheer sonic terror. Emcee Dälek continues his characteristic apocalyptic, political raps, but its producer Oktopus whose talents truly take over, his horrific industrial soundscapes providing a jaw-dropping, paralyzing atmosphere for violence and menace. In context, the industrial influence here is much more Einsturzende Neubauten or Coil than Nine Inch Nails or Ministry, and that makes it all the more interesting. Plenty of emcees have banked on how raw or hard they are, but Absence presents a kind of terror that mere braggadocio can’t accomplish. – Jeff Terich

Saul Williams – The Inevitable Rise and Liberation of NiggyTardust

A collaboration between Nine Inch Nails’ Trent Reznor (as producer) and Saul Williams, best known for his boundary-pushing spoken word material, The Inevitable Rise and Liberation of NiggyTardust turned out to be a surprisingly accessible effort by two artists known for their unapologetic experimentation. Riding a fine line between industrial-rap and rap-rock (there’s a fully-sung cover of U2’s “Sunday Bloody Sunday” here), Williams’ third full-length mixed elements of his poetry with instrumentals reminiscent of NIN’s Year Zero — a risky combination with an intense, yet aurally pleasing payoff. With equal parts harsh philosophy and dark humor, it’s a grooving, self-aware hip-hop album as enjoyable as it is serious in its tone and approach. – A.T. Bossenger

Joyfully abrasive, carelessly artistic, and shamelessly self-involved, Death Grips’ major-label debut, The Money Store, used the existing language of noisy, industrial rap to raise the genre to a new level of anarchic chaos. Featuring a heavy use of found-sound samples, the jarring beats of tracks like “Get Got,” “Double Helix” and “Hacker,” provided the perfect theatre for Stefan Burnett’s intense, often barked, stream-of-conscience musings. Death Grips have gained notoriety for trolling record labels and audiences alike, but with creative execution this rewarding, we’re willing to forgive them if they’ll keep up the good work. – A.T. Bossenger

Cancer 4 Cure is claustrophobic. It’s the soundtrack to a maximum security space prison, music from the corroded mind of a dying android. The fact that El-P takes the Metroid theme and turns it fifty shades darker for the album’s happiest song is an indicator of the dystopian sci-horror landscape he creates. The lyrics are darkly paranoid, delving into his fears and insecurities with no attempt to defend them. “Drones Over Bklyn” is full of political pessimism, while in album standout “Tougher Colder Killer,” he faces down the numbing inevitability of death.

But the album isn’t just El-P peering out nervously through the shutters: he takes that insularity and breaks it down. He gradually goes from fuck-the-world posturing on tracks like “The Full Retard” to a kind of cathartic happiness on “$ Vic/FTL (Me and You).” Cancer 4 Cure is a unique industrial rap album because it takes the crippling darkness that’s omnipresent in the genre and finds an odd peace within it. – Sam Prickett