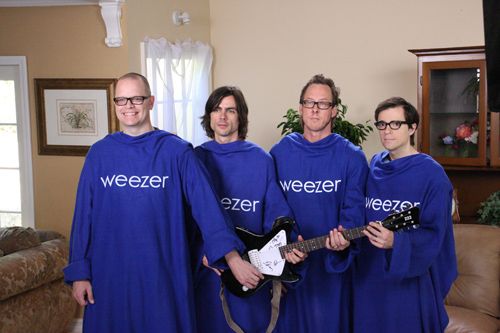 From a distance, being in a rock band looks a lot like being in a state of perpetual adolescence. Musicians don’t have to wake up early to make the 9-to-5 grind, chase dreams as a matter of livelihood, probably think a lot about the opposite sex — and do so publicly at that — and maintain a sense of romance that the average person probably abandoned once they collected their diploma. This isn’t necessarily true — musicians have to pay their bills like anyone else — though it definitely applies to some of bands. But the connection is there largely because music conjures up something youthful, yet intangible in the listener. The thread between music and adolescence is one of feeling more than anything literal — vulnerability, uncertainty, open-heartedness, etc. Nobody ever really wants to feel the awkwardness of being a teenager, but as a grown-up, the idea of reclaiming some of your innocence can be very appealing.

That isn’t at all lost on Rivers Cuomo, but the nuance most certainly is. When Weezer released their debut album — the legendary “Blue Album” — Cuomo captured in his songwriting a certain kind of charming loser confessional. His songs about romantic insecurity, retreating into his garage with fantasy, his alcoholic stepfather and a general feeling of being an outcast were both catchy and relatable. Sure, he seemed a little bit like Milhouse Van Houten with the benefit of Ric Ocasek’s production, but it worked. It helped that Cuomo had the benefit of youth on his side; the ’90s were a breeding ground of twenty-something insecurities in music, and though Cuomo’s skewed maybe a little closer to his teenage years, they at least seemed fresh at the time. That ultimately turned out to be Cuomo’s biggest Achilles heel in the scheme of things; he got older, but his songs remained stuck in pubescent limbo. 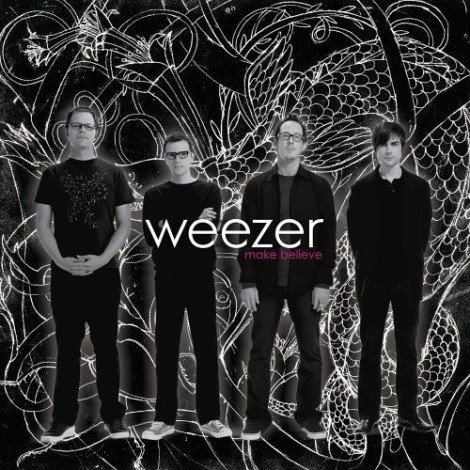 Make Believe may or may not be Cuomo’s biggest musical crime; the Red Album and Raditude are at least strongly competitive on that front. But Make Believe was the album that deflated any and all enthusiasm for future Weezer albums in perpetuity throughout the universe. Yep, this is absolutely the album that ruined it, even if the signs were there all along. No doubt, Weezer and Pinkerton were a strong start, but The Green Album didn’t at all justify its five-year wait, nor did Maladroit shore up enough goodwill with its quickie turnaround. The pathos of Weezer was growing gimmicky, and the sophistication of Pinkerton (not to mention studio work from Dave Fridmann) had all but disappeared in the rearview. With Make Believe, all they had left were some elementary school rhymes, more self-pity than usual, and Rick Rubin. And Rick Rubin just wasn’t enough to save this Scotch-taped and superglued pop wreck.

It’s easy to see just how steep a downhill slope Cuomo’s on from the album’s leadoff track and first single, “Beverly Hills.” Part Joan Jett riff and part goof-rock a la The Offspring’s Americana, “Beverly Hills” marked a new low for Weezer when it was released, and is still pretty much terrible. When so much goes wrong at once, it’s hard to pinpoint what element topples this precarious pile of mediocrity. The half-rapped sing speak? The Frampton-esque talkbox soloing? The emotionally stunted vat of misery Cuomo can’t escape (“I didn’t go to boarding schools/ Preppie girls never looked at me/ Why should they?/ I ain’t nobody“)? Why choose — it’s all horrible.

It’s hard to recover from a first cut that bad, though Weezer at least gives the listener the benefit of the doubt in the opening melody of “Perfect Situation,” but that proves fleeting to. An almost-good power-pop gem immediately turns back to shit once Rivers opens his mouth and spits out a garbled opening line that’s somehow both lazy and rhythmically challenged: “What’s the deal/ with my brain/ Why am I so obviously insane?” This is about where Rivers finds himself stuck in an bottomless pit of first-timer rhyming dictionary AB/AB schemes that sound almost like self-sabotage. To wit: “What kind of future will we have?/ Will we ever find peace?/ Everybody thinks we’re crazy/ They’re about to call the police.” You’d believe that Cuomo was going somewhere with the first half, but then — Nope! Peace, police, done and done. Next!

If “Beverly Hills” is just one of the worst songs in Weezer’s catalog, then “We Are All On Drugs” is the one that actually takes home the trophy. It doesn’t take much more than the first lines — “When you’re out with your friends/ In your new Mercedes-Benz/ And you’re on drugs” — to know that it’s going to get worse before it gets better, and it might not actually even get better (Spoiler alert: it most certainly does not). I’m not sure if it’s a PSA or just the result of being so creatively bankrupt that Rivers Cuomo just couldn’t come up with anything better than “And you’re on drugs” as a recurring refrain. I’m not sure one is better than the other.

It’s easy to chalk the many Weezer Make Believe problems up to laziness, or it would be, if Cuomo didn’t actually seem so earnest about the creative process behind the album. His immersion into meditative practices played some influence on the album, including the title, which supposedly came to him while meditating. He wrote “Hold Me” after a 24-hour fast, and remarkably, the band recorded as many as 28 demos leading up to the album that didn’t actually make the final cut. By all accounts, Weezer took this album very seriously, and came out the other end with possibly the most embarrassing 45 minutes of their career. Because at this point, Weezer are pretty far removed from being teenagers. The sloppiness, the lack of maturity and inability to express emotions like an actual human being aren’t charming — they’re just sad. It would almost be more reassuring if the album actually were half-assed. If Make Believe teaches us anything, it’s that sometimes applying yourself won’t necessarily get you anywhere.