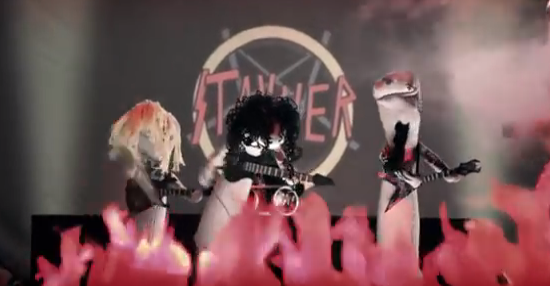 Slayer covers have been surprisingly popular on YouTube lately — whether on a ukulele or a banjo — but the Slayer tribute video has reached a new level of entertainment and silliness with the emergence of Stayner: A sock puppet Slayer tribute band. Loudwire has posted a clip in which Stayner tears through their version of “Raining Blood,” the closing track from Slayer’s classic 1986 album, Reign In Blood.

However, it’s not exactly a totally faithful cover of “Raining Blood.” These are sock puppets we’re talking about here, and sock puppets might have a different perspective or experience than you are I, so with that in mind, they change the song into “Raining Bleach” (“It’s not a colorfast dye!“).

Also notable about the video is that it pays tribute to late guitarist Jeff Hanneman in a subtle, but affectionate way. The Hanneman puppet in the video is wearing a jersey with the number 42 on it, which references the Oakland Raiders jerseys that Hanneman would often wear onstage. Anyway, watch the video below and rock out/have a good chuckle.