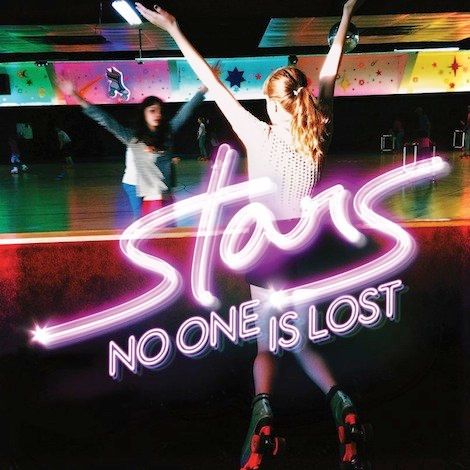 Stars’ newest album No One Is Lost opens with one of their favorite tricks: a sound clip from their musical vaults. They’ve probably got an entire database designed for just this thing. Some clips are powerful statements, like the one that opened 2005’s Set Yourself On Fire, which was written by singer Torquil Campbell and recorded by his father (“When there is nothing left to burn, you’ve got to set yourself on fire”), while some seem to be from films or TV shows. “From the Night,” the opening song to No One Is Lost, and one of their best songs to date, features ambient street sounds and what sounds like a group of speakers conversing in French.

From there the song leaps into muted techno beats as Torquil Campbell, the male half of the lead vocal duo, soliloquizes on the nighttime club scene until the piece explodes into a tune that would be at home in one of those very clubs. Indeed, that’s the subject of the track—the alternate universe of the nighttime with all its dance moves and strobe lights where, presumably, the narrators can be their truest selves and love whoever they will. Campbell is joined by Amy Millan in a glittery chorus with smashing, echoey keys and hip swinging bass notes, chanting together in an almost Xanadu-esque Newton-John and Cliff Richard manner that they “don’t care if we never come back from the night” over and over again.

If you close your eyes, you can almost see Campbell and Millan standing together under the disco lights, perhaps with skates on (perhaps not), standing in glittery suits, staring hard at each other, belting their lungs out and shaking their heads in unison. But before “From the Night” gets too comfortable as a Pure Disco favorite, it drops back into that quiet, ruminating lull where the song began and Campbell muses on the drab reality of the numbing monotonies of daily living, replete with its isolating, towering office buildings and zombifying repetitiveness. The track is hooky, catchy, and it sets the stage for the entire album, which happens to be one of their finest to date. It harkens back to the days of Nightsongs or Set Yourself On Fire where every song was filled with sinew and nerve, bled into the music to create a listening experience that drew us in and gave us anthems for modern living and loving.

Both Amy Millan and Torquil Campbell are given room to shine on No One Is Lost, backed by their ingenious band who deliver the sort of pop moments that look effortless but which require a light touch as often as those heavy-handed gestures. Spot on drums, fuzzed guitars, mood-setting keys, and strokes of bass guitar that are so right they’re something felt rather than noticed. When Millan takes the lead and drives the whole way on certain tracks, like “No Better Place,” “Are You OK,” and “Movie Score,” the vibe is that of girl-pop like Metric or Tegan and Sara. The effect is delectable. There’s something summery and promising about these rockers and they fit perfectly as album highlights.

The mood that arises from solo Millan on “No One Is Lost” never gets old. Before she has the chance to hit a threshold, however, the sonic plateau is broken up by duet tracks featuring both Millan and Campbell taking the lead, or by Campbell alone committing his singular voice to a track. Some have called Millan the trick up Stars’ sleeve, and while she’s a disarming force to be reckoned with—she’s a real siren, capable of melting your heart—Campbell has always been my weakness when it comes to the band. His voice is smoky and sultry like on “Look Away,” comprised of both aural curves and smooth lines that slip deliciously around the ear. Sometimes it’s jagged and strong as seen on the dark, sexy “You Keep Coming Up,” but usually it’s as soft as butter. But that’s just me.

As bands progress, and when they’ve been around as long as Stars have been, surprisingly good albums like No One Is Lost become the outliers. While they continue to rely on old tricks, it’s clear that these guys are digging deep into their shared experiences to craft songs that still manage to feel fresh and exciting. At this rate, there seems to be no expiration date for their creative flame.

Tegan and Sara – The Con

Stream the new Stars album, No One is Lost

10 Songs for a High School Reunion