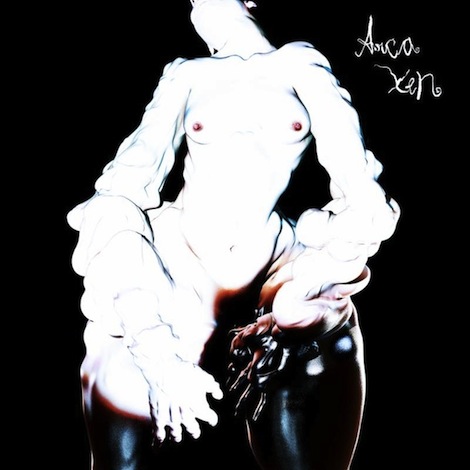 Alejandro Ghersi, the Venezuelan-born producer who records under the name Arca, isn’t a household name — yet. He’s released merely a handful of EPs, most notably 2012’s Stretch 1 and Stretch 2, but it’s the work he’s done with other artists that’s more likely to ring a bell. His name is attached to a long list of tracks on FKA Twigs’ 2013 release EP, as well as this year’s LP1. Or perhaps you heard his work on Kanye West’s uncharacteristically dark and electronics-driven Yeezus, from last year. He’s also on tap to lend his production talents to Björk’s next album, but if he hasn’t entered your consciousness via any of these releases just yet, then his debut album Xen isn’t a bad place to start.

Xen, more than any of Arca’s previous work, showcases just to what extent his beat-driven phantom-scapes are founded upon weirdness and chaos — which is to say, a lot. Yeezus and LP1 are, frankly, pretty straightforward when held against some of the intense and disorienting sounds of Xen. The entire presentation of the album is partially intended to take the listener outside of any kind of comfort zone. The album cover depicts a partially nude humanoid being that’s at least one-quarter Stay-Puft Marshmallow Man, and it most likely represents Arca’s gender ambigious alter-ego, which is also called Xen. But everything grows considerably more peculiar once Arca lets his beats run wild on Xen. There are occasional moments of clarity and accessibility (“Slit Thru,” “Thievery”) and even calm (“Lonely Thugg” — sort of). But Xen is very rarely a place of comfort or serenity.

Throughout Xen, Arca doesn’t so much ride the beat as dance around it. He lives on the periphery, in the shadows; he may have grazed the mainstream with some select collaborations, but the mainstream isn’t necessarily where he’s most comfortable. The title track slashes and jabs with distorted, choppy samples as a breathy percussive device goes in and out — it’s more unsettling and eerie than danceable, which is a common motif here. “Sad Bitch” plunks and pops and bleats, and “Sisters” wobbles and moans. Very rarely does Xen ever come close to anything that sounds like a single, though “Thievery” technically is — its reggaeton-inspired pulse most definitely a highlight among the many fascinating obfuscations here. But it never takes long for Arca to let things go off the rails again, which speaks to how vital his presence feels at the moment. Though he’s provided his services in the name of pop music, his real talent is in tearing it apart.