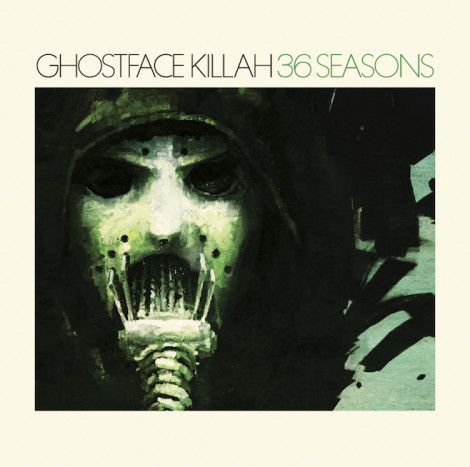 Nine years is a long time; things have changed for Tony Starks. His lover, Bamboo, has left him for another man. New thugs and crooked cops spill innocent blood on the street, the old neighborhood is up in flames. Returning home after 36 seasons, Starks steps into a battlefield — things aren’t what they used to be and he intends to do something about it. Such is the premise for Ghostface Killah‘s 36 Seasons, a comic-book-style concept album which includes a cast of 10 artists — including the likes of AZ, Kandace Springs, Rell and Kool G Rap — all playing a variety of characters, including Ghost as Tony Starks and Kandace Springs as Bamboo. The message of the album takes a jab at current events in America, specifically police brutality and racial profiling — something Starks deals with plenty here: “I seen the police pull up, and rides hopped out/ Put your hand behind your back, you’re guilty without a doubt.”

While the album isn’t lyrically masterful per se, (at one point Starks says, um, “Nigga I wipe my dick on your spaghetti fork, nigga“) the comic-book-style delivery carries the message and develops the concept of the album well. Tracks like “The Battlefield,” “Pieces of the Puzzle” and “Double Cross” provide a crude dose of reality, through raw instrumentals and brutal lyrics, depicting scenes of gang violence, rivalry and retaliation, police brutality and corruption. The more tender side of the album includes, “Love Don’t Live Here No More,” “It’s a Thin Line Between Love and Hate”, and “Bamboo’s Lament,” songs of love, heartache, rejection, dejection, betrayal and deception. “Love Don’t Live Here No More” is particularly heart wrenching, being the first encounter Starks has with Bamboo, wherein he realizes she’s found another.

“Homicide” is one of the album’s strongest highlights. Vividly delivered, the track comprises eerie synths and sharp drums that succeed in making one’s head spin and heart palpitate. Starks’ got a price on his head and someone is out to collect. The perpetrators miss him, but leave a friend dead on the floor with a note saying they have his brother, to add insult to injury. Starks responds, “Ya’ll mothafuckas comin’ for my head?/ This is Tony Starks, you can’t stop me, mothafucka.” The heat is on, they have waged a war, and he is coming with a vengeance.

Ghost takes the listener to hell and back with 36 Seasons, weaving a tale of personal passions, loss, and a history of violence. He lets us peer into Starks’ world, exploring the duality of love and hate through colorful storytelling, and rhythmic beat making. It’s a well-crafted hip-hop album, soulful enough to relay a powerful message and make you bust a move, even if lyrically it fails to inspire.