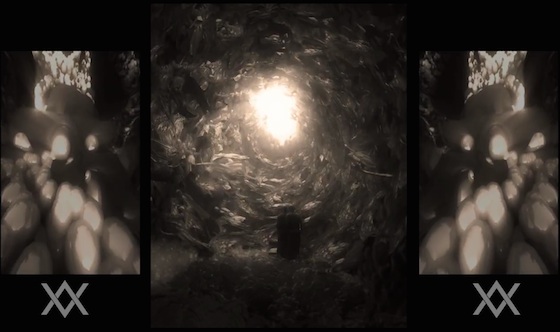 Last week, New York transcendental black metal outfit Liturgy released their new album The Ark Work, which isn’t really much of a metal album at all. It is, however, fairly representative of the band’s unconventional and experimental approach to the genre. Today, the band has just released a new video out for standout track “Quetzalcoatl.” Directed by AUJIK, the clip is a definite head-trip, with a triptych of visuals happening simultaneously, with the center panel focusing on figures looking up at a spiraling tornado of angels, or sea creatures, or something. It’s pretty strange stuff, but it’s quite beautiful in its own way. In fact, it’s actually quite hypnotic.

Whatever’s happening in the clip, which is open to interpretation we suppose, it’s definitely worth getting lost in. Watch the Liturgy “Quetzalcoatl” video below.