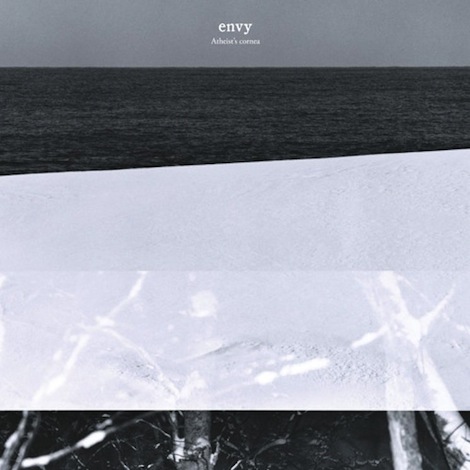 In the five years since the release of Envy‘s 2010 album Recitation, the Japanese post-hardcore band’s name has measurably grown in stature. The Tokyo-based outfit—who once specialized in shorter, more intense bursts of seething, emotional hardcore—have slowly turned an already loud, furious musical force into one that’s grown larger than the group of musicians that write and perform the music. In 2003, with A Dead Sinking Story, Envy made their greatest leap, growing their face-melting post-hardcore compositions into epics that rivaled the powerful sonics of Mogwai or Isis. Since then, they’ve continued to refine and expand, each subsequent release a good, if not necessarily superior variation on a theme. But it wasn’t until taking a brief break in the last five years that their influence has echoed so loudly, in the post-hardcore revivalism of Touche Amore and La Dispute, or in the soul-baring black metal of Deafheaven. The group even landed on Fact’s list of the greatest post-metal albums of all time, which only goes to show how truly complicated it is to categorize a band such as Envy. For a long time, their impact only had ripples around the fringes, so it’s astonishing to see those ripples turn to genuine waves.

For Envy to arrive with a full-length album after their ghost has haunted underground music feels more important than the releases of their past two or three albums, if only because the space has allowed more time to process Envy’s place in punk, post-rock, metal, or wherever it is they fit, exactly. And it’s not any clearer on Atheist’s Cornea, which is as simultaneously as intense and as atmospheric an album as they’ve ever released. It’s also their shortest in some time, spanning a lean 43 minutes, with quite a few of its songs concluding before the five-minute mark. The brevity of these tracks doesn’t reflect their quality, however; Envy merely packs the same power and devastation of their past albums into a work that demands as much attention and energy from the listener, if not necessarily as much time.

Concise or not, Atheist’s Cornea is among the more immediate of Envy’s albums, to the point of actually being pretty damn catchy in some of its strongest moments. The melodic fanfare of “An Insignificant Poem” blends the melodic complexity of ’90s emo with the dense guitar layers of shoegaze, as vocalist Tetsuya Fukugawa balances his throaty screams with moments clean-sung vulnerability. Similarly, the frantic, near-black-metal blast of opener “Blue Moonlight” is one of the most thrilling tracks the band has ever recorded, surging into a chorus that’s at once face-rippingly tense and utterly beautiful. Yet, slowed down, Envy showcases even more depth and breadth in their sound, with the slow moving metalgaze drones of “Ticking Time and String” standing up to the best of Boris or Jesu, and “Shining Finger” setting Fukugawa’s spoken-word lyrics against a breathtaking dream-pop backing. It shouldn’t be any surprise to longtime listeners, but Atheist’s Cornea boasts as much beauty as it does deafening fury.

The full scope of Envy’s aesthetic can be heard in the final two songs: “Two Isolated Souls” and “Your Heart and My Hand.” While the former showcases the band at their most immediate and visceral, surging and seething into a metallic emo climax, the latter is where they’re at peak post-rock, blending spoken-word passages with an ascendent, albeit gradually building sequence of ethereal heroism. But what sets Atheist’s Cornea apart from the band’s most recent works—which aren’t all that recent, everything being equal—is that it never strays too far from that immediate, visceral feeling. Five years in a band’s career can be spent building something up, and adding until it grows into a work of grandeur and majesty. Or, in the case of Envy, it can be spent distilling a massive work down to something more pure and direct. As Atheist’s Cornea is concerned, that’s five years well spent.