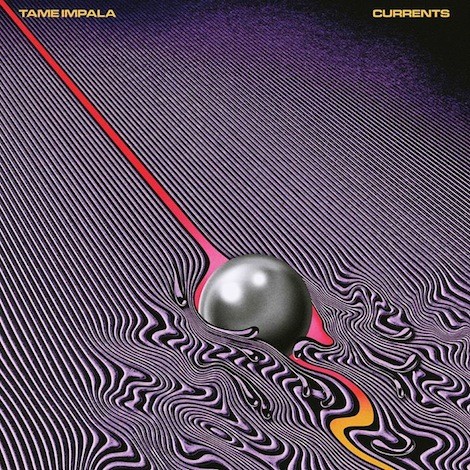 Almost by stealth, Tame Impala has managed to become one of the biggest rock acts in the world, and there’s a fine irony in the fact that this has been achieved with two albums filled with personal reflection and introspection. It’s now ready to come out of its shell—and by extension, so is its creator. “I can’t always hide away / Curse indulgence and despise the fame.” Ostensibly a Kevin Parker solo project, it sounds very different to anything we’ve previously heard from him, but that’s part of its charm. Parker has always been adept at writing colorful songs, but the sort of kaleidoscopic shades Currents deals in will surprise many; in particular, those fans who caught on to the insular and weighty Lonerism will be in for a shock.

Currents is the polar opposite of that, casting aside the trappings of psychedelic rock and giving ambitious pop music a welcoming bearhug. That a stylistic shift of this nature occurs on an album that deals with the idea of change itself is the icing on the cake. “All this running around, I can’t fight it much longer / Something’s trying to get out and it’s never been closer,” Parker admits on opening track “Let It Happen,” sounding almost fearful, in defiance of the song’s message, before embarking on the transformative journey documented on the rest of the record.

The opener is a juggernaut, overwhelmingly busy and filled with propulsive energy, but it’s followed by “Nangs,” a chilled interlude that offers the listener breathing space barely 10 minutes into the record, before “The Moment” shuffles in, buoyed by finger snaps and an instantly memorable vocal melody, focused on expressive keyboards and synths more than anything else, its creator revelling in his new-found freedom to create. “Yes I’m Changing” is a mid-tempo track that deals with complex emotions over major-key melodies (“They say that people never change, but that’s bullshit / They do”), while the slinking, hip-hop beat that forms the backbone of “Eventually” lends a graceful air to a song that zeroes in on the painful end of a relationship, eschewing self-pity for a pragmatic “this is for the best and we’ll both benefit in the long term” approach. There’s positivity to be found everywhere one looks on this record; even unrequited love is shrugged off on “The Less I Know The Better.” By then, Parker is caught up in the change, finally able to let it happen.

There’s a free-flowing feel to much of the record; it’s 56 minutes long but feels much shorter, stripped of the excesses that could have dragged it down. Parker is undergoing metamorphosis and learning to be more instinctive: fading out “Disciples” before it hits the two-minute mark; proclaiming “I’m a man, woman / Don’t always think before I do” on ”Cause I’m A Man’; smothering “Reality In Motion” in haze and reverb to create a druggy, tripped-out experience that puts the psychedelia of old back into his pop vision. Is it possible that the Tame Impala of old and this new incarnation can learn to coexist? Pretty much anything is, in Parker’s world, but that’s a question for another time. His latest opus is a paean to change, after all; who knows where his head will be at three or four years from now? For the moment, his status as a DIY icon remains unchanged—let’s see where the currents of this fascinating, vibrant and powerful record take him.

Of Montreal – Hissing Fauna, Are You the Destroyer?