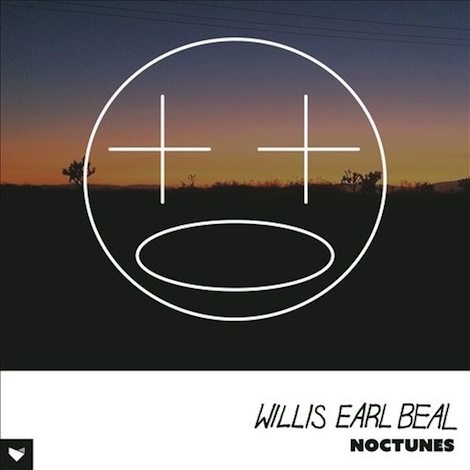 Willis Earl Beal works best when he works alone. His career over the past few years has trodden a well-worn path; in a sense, it has depicted a battle between the artist as creator and the artist as public figure. Beal’s music has been released since 2012 to increasing amounts of critical acclaim, but with that has come increased scrutiny. He put out two records on Hot Charity, a subsidiary of well-known indie label XL Recordings, in 2012 and 2013, but with that done, he wanted out; Beal was against doing much promotion or touring of his records, and despite sophomore album Nobody Knows being well-received, Beal wasn’t getting along with XL, and they parted ways the following year.

There’s a sense of painful intimacy to Beal’s music, in which he has documented personal and emotional troubles as a form of self-medication. While the idea of the tortured artist has become increasingly cliché in recent years, Noctunes is the sound of one man trying to put himself back together after a difficult time. In the aftermath of Nobody Knows, he self-released material at a manic rate: two EPs and his third full-length LP, a 21-song beast called Experiments in Time: The Golden Hour, but seemingly went to pieces in the process. He says of that time, “I’d drink myself into stupors. I’d walk around in the daytime, crying, then I’d go downtown. The police would bring me home in the morning.” He managed to avoid slipping into oblivion and stayed focused long enough to make his fourth album; and if you’re going straight into this from having last heard him on Nobody Knows (unfortunate enough to have missed the low-key third LP), you’re in for quite a shock. That album was a fully-orchestrated affair, but Beal is more at home with minimalism, a concept that informs even his lyrics.

These are documents of a troubled time, but details are spared; only Beal’s voice and an admirably pared-back approach to lyric writing are used to convey the intense, deep emotions that run through the 12 songs on the record. It’ll probably be the voice that reels in newcomers—older fans of Beal’s music will scarcely have heard him like this. “Lust” is an account of a sleepless night set to droning synths and gently plucked guitar, while lead single “Flying So Low” is a portrait of Beal at his lowest ebb. These are serene, languid songs that frequently stretch beyond the five-minute mark with ease. More ambient and restrained than anything he’s previously released, it’s a collection driven more by melody than rhythm; gentle, brushed percussion simply keeping time in the background is as busy as it gets, with two exceptions; one being the bassy thump of “Like a Box,” something which seems at odds with the rest of the record until you consider that it’s the only track here that so much as flirts with the idea of being uptempo.

“Survive” takes the other path and combines exotic percussion with subtle electronic flourishes while its synth-drenched melodies drift along for five minutes, providing a backing for a particularly passionate vocal performance from Beal. It’s one of the more immediate cuts on an album that won’t give you much on initial listens. Its creator has had his mind set on creating challenging, fascinating and emotional music for a few years now, and this is his most assured set of songs thus far. Come for the astonishingly powerful voice, stay for the evocative lyrics, rinse and repeat; the moment Noctunes clicks and everything falls into place will make it all worth it.