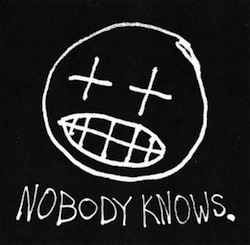 When Willis Earl Beal first surfaced with last year’s Acousmatic Sorcery, his biography captured the attention of the press before most of them even heard any of his songs. After all, he was an army vet who spent some time homeless, worked as a security guard, recorded his debut album on a karaoke machine and dropped off copies in coffee shops — all supposedly as an effort to find a girlfriend. And if any tale is destined for Internet virality, it’s that one. But unlike many artists who gain attention through their eccentric story or personality, there was something genuine and raw about Beal’s music. Behind his lo-fi growls and chants, there was an honesty and realness not unlike the croons of blues legends like Howlin’ Wolf. In an age where middle-class rap and laissez-faire indie-pop have become the norm, Beal offered a true and meaningful view into his own anxiety and pain, with no hype or exaggeration needed.

On Nobody Knows Beal ditches the karaoke machine for a traditional studio but still wears that same honest-to-god, blues-ridden pain on his sleeve. When he’s at his best, he channels the dark strength of Tom Waits or the too-crazy-to-be-faked appeal that Adam Green has perfected so well. And with those strengths, Beal brings along all the good and bad that come with the blues. At times movingly soulful, at others painfully misogynistic, the realness and pain behind Beal’s music is clear, but not always crafted or targeted in any specific direction. Every so often his themes and bantering don’t even seem to match up with the sonic tones of the record. In these ways, the Beal’s writing on this effort is not much different than on Acousmatic Sorcery.

Musically, however, Nobody Knows is a huge step forward for Beal. While his own voice is still a major part of the instrumentals, a full-band including strings makes several appearances. However, Nobody Knows is still largely a minimalist effort, focusing on Earl’s strong, silky croons and gritty shouts. Opener “Wavering Lines” focuses on that voice, only breaking its a cappella vibe a couple minutes into the track. From there, Nobody Knows sticks to classic rhythm and blues formats (think B.B. King, not Drake), but with several twists. Tracks like “Blue Escape” offers a piano ballad with string accompaniment, but the arrangement is bizarre and sounds more like Eric Whitacre than Stevie Wonder. Songs like “What’s The Deal” and “White Noise” push into the territory of Frank Ocean and The Weeknd, mixing sorrowful blues conventions with creeping, ethereal sonics. “Too Dry to Cry,” “Ain’t Got No Love,” and plenty of others bring forth the shouting, raw sort of blues that was so present on Acousmatic Sorcery. There’s even a guest vocal from Cat Power, but that song’s cheerfulness seems a little forced on this record and a bit of a misstep in the scheme of things. Like most blues artists, Beal is at his best when he’s down and gritty, troubled and sincere.

Beal has offered an impressive sophomore effort, especially for his first foray into the studio. But, in many ways Nobody Knows can leave the listener longing at the end for more of an explanation, more of a message behind these dark blues. Perhaps that’s the point — to tell a story of sorrow and isolation, as well as the trite joys that one hangs onto for escape. Only time, repeat listens — and perhaps a third record — will tell.

Perfume Genius – Put Your Back N 2 It