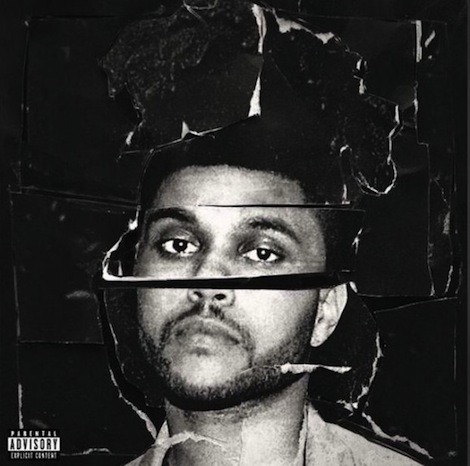 One thing you can’t deny about the mixtapes and major-label debut of The Weeknd—House of Balloons, Thursday, Echoes of Silence and Kiss Land—is that they’re cohesive. There’s a unifying sonic and thematic aesthetic: R&B vocals atop soundscapes steeped in industrial, trip-hop, 808s-era Kanye and Southern trap, lyrics depicting a sad boy submerging his emotions in promiscuity, misogyny and drug overindulgence. Ever since Balloons dropped in 2011, The Weeknd has been love-it-or-hate-it due to this consistent style.

Now, poised on the verge of a huge breakout, The Weeknd—once vocalist Abel Tesfaye and producers Illangelo and Doc McKinney, now Tesfaye and a wide assortment of studio cooks—has abandoned that cohesion on Beauty Behind the Madness. This album’s a fucking mess, and that’s the charitable term.

It would appear someone convinced Tesfaye to try a wide spectrum of musical styles. A noble goal, but genre-hopping requires the talent and versatility to fit different sounds. Tesfaye is many things, many of them less than pleasant in this writer’s opinion, but in any case versatility is not one of his positive traits. This is clear right from the first track, “Real Life,” a slickly produced pseudo-power-ballad with booming strings, atmospheric guitars and reverb-laden drums. It’s an interesting track assigned to the wrong vocalist.

It gets genuinely wretched in the next two tracks. “Losers” eventually turns into something I can only describe as synthetic neo-swing/lounge. Like Big Bad Voodoo Daddy and The Weeknd’s early tapes got into a car crash and everybody fucking died in hideously graphic fashion, but you can still hear this obnoxious sound coming from the shattered car stereo. “Tell Your Friends” has an OK midtempo piano groove to start, then in the coda becomes a bombastic guitar-squealing mess, and is one of the shittiest productions Kanye West has ever been involved in. It also gives us the charming lyric, “I’m that n—a with the hair, singin’ bout poppin’ pills fuckin’ bitches livin’ life so trill,” which is a refutation of his entire sad-boy ethos, but whatever…maybe he’s not sad anymore and just a contented misogynist prick? Also, Tesfaye calling attention to his monstrosity of a haircut is beyond weird to me.

Beauty Behind The Madness isn’t without songs that work for what they are. Tesfaye has found one style to which he’s incredibly well-suited—blatant Michael Jackson ripoffs. (He worked at this before—recall his cover of “Dirty Diana.”) This results in the album’s two best tracks, the colossal hit “Can’t Feel My Face” and “In The Night.” The latter apes MJ even more blatantly than the former, resulting in a truly soaring chorus anchored by throwback bass synths and Tesfaye’s best vocal performance to date. “Can’t Feel My Face” is deservedly one of the songs of the summer—fast, funky and dancefloor-ready. The minor-key symphonic pop of “Earned It” also kind of works. The songs on the album closest to the mixtape trilogy/Kiss Land sound—“Often,” “Acquainted” and “The Hills”—are also fairly successful. I wonder, though, if Tesfaye grasps how the vocal tone on the verses of “The Hills” gives away how pathetic his lothario act sounds—he’s literally fucking whining at the woman to whom this shit is addressed, like a moody-ass kid who lost his Halloween candy.

Beyond these songs, the remainder of Beauty Behind The Madness is failed stylistic experiments. Some are laughably catastrophic, others minor. In the “minor” category goes “Prisoners,” which features a delightfully warbly Lana Del Rey verse (and makes you realize how much better LDR is at theatrical self-loathing—she’s better at playing a role than he is). And the first half of “As You Are” is an acceptable ’80s pastiche that only fails by using “sex” as a verb, but then it trails off into a soporific snail-paced haze of loops.

Then there are the catastrophes. Whoever convinced Tesfaye that it’d be a really good idea for him to do “Shameless,” an acoustic ballad with drip-drop percussion and —I shit you not—a talkbox electric guitar solo, belongs in music jail for a year. (Apparently it’s some producer named Wheezy, unknown to me. You fucked up, dude.) It’s laughable, a copy of a copy of what a “sensitive ballad” is supposed to sound like. The slow, sparse guitar sound on “Dark Times” is kinda interesting; the Ed Sheeran verse is not. Him playing a tough guy is thoroughly not his look. It isn’t Tesfaye’s either, given his alternatively blatant and dishonest misogyny. Closer “Angel” is The Weeknd’s attempt at biting Prince, and I don’t think I need to say much more than that it has a children’s choir on it toward the end.

I’m weary of discussing The Weeknd’s lyrical misogyny, but it’s unavoidable as it is the core of Tesfaye’s on-record persona, more so than the average rapper who gets hemmed and hawed over on a daily basis for this reason. On Beauty, this is somewhat toned down—well, more like slightly better concealed. No longer is he making winking references to a woman’s inability to swallow his whole dick (“Kiss Land”), or coercing drugged-out girls into gangbang (“Initiation”), but all that ultimately means is that he’s being less honest about what he thinks of women. He’s already made it pretty fucking clear, and it sure as shit won’t impact his album sales.

If I could buy the emotions driving Tesfaye’s bilious lyric-writing for even a second, I might understand it if not condone it. I understand why Future is drowning himself in random emotionless sex as chronicled on DS2 and the stellar mixtapes preceding it, because the broken heart fueling his tailspin can’t be suppressed in his tone or lyrics, and I understand why Kanye is purging all his vilest sexual demons on Yeezus. But through the course of five releases, Tesfaye’s become more and more empty, and casually so. He just seems like an asshole, using the technical acumen of his voice to fabricate feeling and create shock due to its juxtaposition with his words, without even the novelty of a fresh sound remaining. Beauty Behind The Madness will sell a zillion copies based on “Can’t Feel My Face” and his preexisting audience, but with a little luck, we won’t remember the first thing about The Weeknd in about five years.