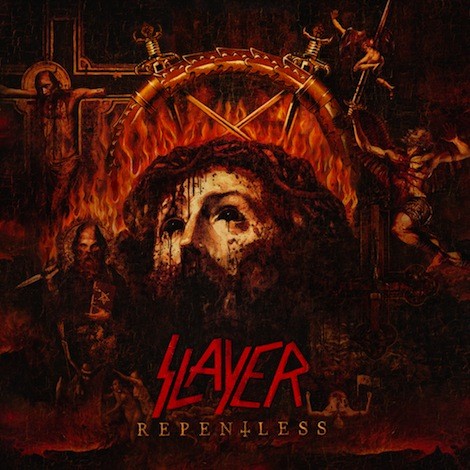 The past five years have been trying times for Slayer. The influential—and once seemingly immortal—thrash-metal foursome closed out the oughts with their strongest album in years, World Painted Blood, which was met with critical acclaim, respectable sales and even a Grammy nomination. Yet, while the band was poised to enter the next decade on stronger footing than they had in years, that began to crumble just a few years thereafter. In early 2013, longtime drummer Dave Lombardo was fired from the band over disagreements about compensation, and in May, founding guitarist Jeff Hanneman died of cirrhosis, thus leaving the band without two of its most crucial members. Without half of the core members of the band left to carry the torch, the soul of the band appeared to be disappearing slowly before them.

Metal’s endured its share of tragedy and lineup changes before, and that includes Slayer, whose ’90s output (with the sole, notable exception of Seasons in the Abyss) was recorded without Lombardo. His replacement during that time, Paul Bostaph, is back on board with new album Repentless, with Exodus guitarist Gary Holt rounding out the lineup. And the early-released tracks from the album, “When the Stillness Comes” and the title track, certainly indicated that Slayer hasn’t abandoned the spirit of their mercilessly chugging riffs, breakneck rhythms and no-frills thrash. Or, put simply, the songs sounded exactly like Slayer, which is at least reassurance that a worst-case scenario hasn’t come to fruition.

Repentless doesn’t deviate far from the formula that Slayer has been revisiting since Divine Intervention or so, and for the most part, that’s perfectly fine. Lightning-in-a-bottle moments like the furious charge of Reign in Blood, one of the greatest metal album albums ever recorded, come once in a lifetime. That album contained the kind of rawness and speed—which pushed it ever so close to being a hardcore punk record—that loses some of its punch with every attempt at recreating it. And while Tom Araya, Kerry King & Co. aren’t necessarily making a carbon copy of their celebrated past records on Repentless, they’re not adding much of anything new, either.

The strongest moments on Repentless are often those that allow some breathing room into the group’s furious gallop, such as on the dramatic intro track, “Delusions of Savior,” or the atmospheric build-up of standout track “When the Stillness Comes,” which presents one of the few moments here in which the band actually takes space into consideration over simply defaulting to balls-out thrash. And yet, that balls-out thrash can be highly satisfying, particularly when it seems like the band is actually invigorated, rather than operating on autopilot. The title track is simple, yet does everything a great Slayer track is supposed to—fast tempos, dizzying riffs, and plenty of ridiculous Tom Araya vocal barks. Likewise, the menacing charge of “Cast the First Stone” offers a bit more creativity in the group’s usual M.O.

Despite the promise of a handful of standouts, Repentless ultimately falls victim to a painful dearth of inspiration. A great number of these tracks sound interchangeable, save for Araya’s ignoble quotables (“Let’s get high/So fucking high!“; “Attack! Continue! Never surrender!“; “You’re staring at the atrocity vendor/A fucking equal opportunity offender“). But a few laugh-out-loud moments don’t necessarily break up the monotony that overtakes the album’s second half. The soul of Slayer isn’t necessarily gone for good, but the band has a long way to go before proving their vitality and creative spark at this stage. Repentless, while promising in a few places, is ultimately a missed opportunity. Slayer can certainly do better, but maybe this version of Slayer can’t.