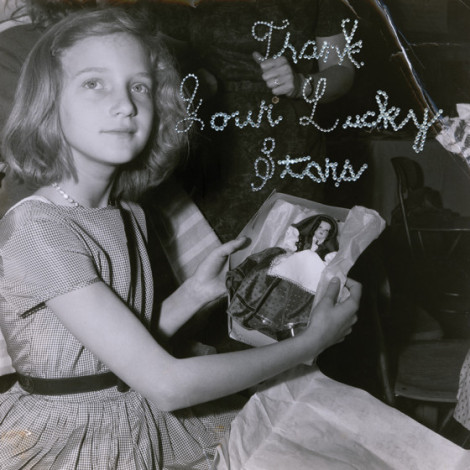 If the cover art for Beach House‘s Thank Your Lucky Stars has a familiar feel about it, you’re not the only one to pick up on that. The photo depicts a little girl opening a birthday present—a doll—with a look on her face that’s not quite a smile, but not necessarily a sad expression either. There’s definitely a sense of melancholy about it though, not unlike the intimate, morose birthday party happening on the cover of their 2008 album Devotion. It’s not an exact parallel, but both images evoke a feeling—a strange juxtaposition of comfort and sadness. And isn’t that ultimately Beach House in a nutshell?

Comfort and sadness are ever-present on Thank Your Lucky Stars, but it’s the former that Victoria Legrand and Alex Scally have leaned away from, and for the better. The album feels, at least aesthetically, a lot more like Devotion than Depression Cherry, which they dropped just two months ago. There are few moments of lush shoegaze density and fluttery dream-pop lullabies. Legrand and Scally have simplified, at least in terms of how fleshed out the arrangements are, and the heavy lifting is left up to the songwriting itself, which on their most recent release sometimes suffered from being secondary to the many layers of beautiful blur. Beach House take on a much leaner sound on Thank Your Lucky Stars, and the starkness and general absence of an effects-laden safety net yields some of their most interesting songs in years.

The parallels that Thank Your Lucky Stars draws to the band’s earlier efforts are mostly in approach. For while the duo doesn’t give in to richly textured shoegaze as they did earlier this year, they’re also still dealing in considerably higher fidelity than they once did. But the difference is pretty stark in opening track “Majorette”: Guitar, organ, drums and voice comprise the entire thing. And though Scally and Legrand build up something that feels plenty exuberant in sound, it’s more of an illusion than anything, their intricate use of simple elements adding up to something greater in the end. But that’s actually the odd song out in a way. The eerie drum-machine dirge “She’s So Lovely” is more bare-bones in its sound, glimmering beneath Legrand’s heartbreaking chorus: “Castles in the sand/Money in your hand/And all I have to do/Is stay away from you.” The band’s embrace of starker arrangements lead them toward a sexier post-punk sound on the excellent “All Your Yeahs,” which has the feel of a more urgent The xx, or a less disco-ready Chromatics. And the guitar-forward stomp of “One Thing” has Beach House rocking surprisingly hard by their own usually soporific standards.

Thank Your Lucky Stars features some of Legrand’s best vocal performances to date, showcasing her range beautifully on the understated “The Traveller” and a subtler, albeit no less stunning approach on the incredible “Elegy to the Void.” There are so many riches throughout the album that it’s almost unfortunate that this was the second of the band’s albums to be released this year, and without much pre-release promotion at that. But for a band who sells a more-than-respectable amount of copies of their records, and fills large venues without any struggle, Beach House’s music has always had the feeling of a closely held secret. With Thank Your Lucky Stars, they draw us in even closer only to offer a surprising and generous gift.