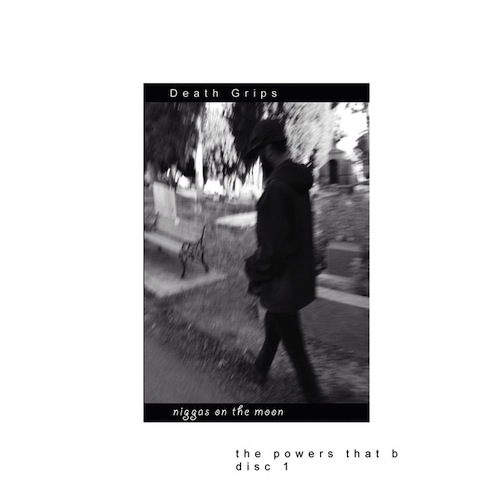 Can a band as brash and attention-seeking as Death Grips be allowed to make a minor album? The larger-than-life personae of emcee Ride and drummer Zach Hill seem only fit to provide us albums of such outsized ambition as their previous releases — all big, fuck-off declarations of anarchic maladjustment.

So what are we supposed to do with Niggas on the Moon? It’s a decidedly low-key release, composed of just eight tracks — a paltry half-hour long — and as the first part of double album The Powers That B, it can hardly be expected to pack nearly the same punch as its more definitive, standalone predecessors. And it doesn’t. What we get is an album that seems fairly restrained, by Death Grips’ standards. There aren’t any ear-bursting ragers like “Come Up and Get Me” or “You might think he loves you…” or anything as overtly dance-y as “Get Got” and “Hacker.” Instead, this album is sonically defined by its through-line, the chopped up samples of Bjork that form the beats of every song on the album. This isn’t the first time this has been done — Kool A.D.’s 2011 EP Hyphy Ballads chopped up Homogenic to chilled-out effect — but here Bjork’s is barely recognizable, transformed into stuttering percussion that punctuate MC Ride’s verses like the screaming of his victims.

Using Björk is a bit of a double-edged sword, though. Andy “Flatlander” Morin’s synths and the variety they gave Government Plates are largely absent on Niggas on the Moon, meaning that there’s little to distinguish the individual tracks. That’s the root of the album’s understatement: there isn’t much track-to-track variety, instrumentally. But it rarely lags despite this; the album’s brevity — and the tracks’ fairly seamless transitions — make Niggas on the Moon function better as an uninterrupted listen, anyway.

And then, of course, there are the joys of listening to Ride. Ride’s vocals always been abstract at best, but here they’re downright opaque. While there’s some fantastic close-reading that’s been done on his lyrics (just check out the RapGenius page for “Birds”) that seems futile with Niggas on the Moon, which seems to be punctuated with non sequiturs only significant for the chuckles they elicit. Opener “Up My Sleeves,” which features most of the album’s strongest moments, sees Ride politely offering, “If you can’t snatch my fetish / I’ll Fedex it.” Sure, you could try to suss out some deeper meaning (the easy availability of sex in the modern age?), but it’s more fun to just appreciate the absurdity. Similarly satisfying is Ride’s deliberately, angrily enunciated “tsk, tsk, tsk,” also from “Up My Sleeves,” and his line “It’s my party / Come early if you’re lonely” from “Say Hey Kid.”

Niggas on the Moon is undoubtedly Death Grips’ least substantial release, but it’s also their most cohesive. As a short, experimental work, the easiest analogy is Radiohead’s The King of Limbs, both in its approach and, in general, the way it’s been received. Of course, that analogy breaks down when you consider that we’ll soon get Death Grips’ counterpoint when Jenny Death arrives later this year. The question that will retroactively define Niggas on the Moon is whether it’s more of the same — and really, it doesn’t seem like there’s much further they can take this Bjork-sampling idea — or whether it’s something completely different, and this album is the softer jab of a substantially stronger one-two punch.