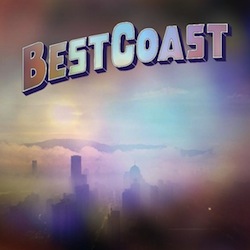 Ah, the follies of youth—what an indispensible resource for creative expression! People have probably been singing about make-ups, break-ups, insecurities and other messy matters of the 20-something set since before the wheel was invented. For all we know, there’s a cave drawing out there somewhere depicting two youngsters in a lover’s embrace: the prehistoric precursor to Zooey Deschanel and Jake Johnson’s televised kiss on New Girl.

Yes, the youthful brew of confusion and sex is a story that has been told many times before, and on Fade Away, Best Coast’s new mini-album, the duo of Bethany Cosentino and Bobb Bruno tell it once again in a slightly different way. All the hallmarks are there for an old-fashioned indie-rock sing-along—chugging guitars; golden-voiced melodies; unpretentious lyrics about old hearts, long nights and untold hours spent waiting by the phone—but the clichés are given marginally interesting new twists. “I want it to be you,” Cosentino sings in “Fear of My Identity,” “but I know it’s me.”

Fade Away might not have the same slackerly charm as Best Coast’s 2010 debut, Crazy for You, a catchy album that made it cool to tweet about your cat. But it sure is a marked improvement upon last year’s The Only Place, a polished effort whose ham-handed title track made this lifelong Californian cringe with embarrassment. Thankfully, none of that sunshine-and-surfboards PR boosterism is present on Fade Away. Instead, we have a set of ultra-catchy songs that make the listener the star of his or her own personal ’90s sitcom.

Opener “This Lonely Morning,” with its brisk beat and simple keyboard refrain, bursts with life—indeed, it’s just the kind of thing you could imagine folks rocking out to at an iconic hangout à la The Max or The Bronze or even Central Perk if the band were playing an acoustic set. The mid-fi, fun-yet-heartsick vibe continues all the way through to closer “I Don’t Know How,” a glossy country crier that switches halfway through into an indie-rock rager, providing the ultimate soundtrack to the final montage of the special Valentine’s Day episode inside your head.

Cosentino is 26 years old, and this is a funny time in some peoples’ lives—as you encounter high school kids and college undergrads, who all seem so hopelessly young and naïve, you really start to feel old, even though you’re really not. Fade Away finds Cosentino in this mindset, as she reflects on how so much heartbreak and uncertainty has worn her down—even while she sings in a voice that’s as gorgeous and pristine as a brand new church bell. “When did I wake up and suddenly my soul had grown so old?” she sings in “Who Have I Become,” a peppy track with a cascading chorus and killer sing-along bridge. Uh, huh. Old soul. Right.

In the grand pantheon of stories about youth, growth and love, Fade Away is far from a masterpiece. To keep up the sitcom comparison, it’s more like a workaday TV show—imperfect, more than a little corny, but full of heart. Jaded adults and serious creatives will undoubtedly scoff at the seven tracks within. But for anybody who’s been jamming out to other albums that mine similar territory—like Wavves’ Afraid of Heights or Mikal Cronin’s MCII—this will make for swoon-worthy stuff.

Treble Roundtable: Make your own genre