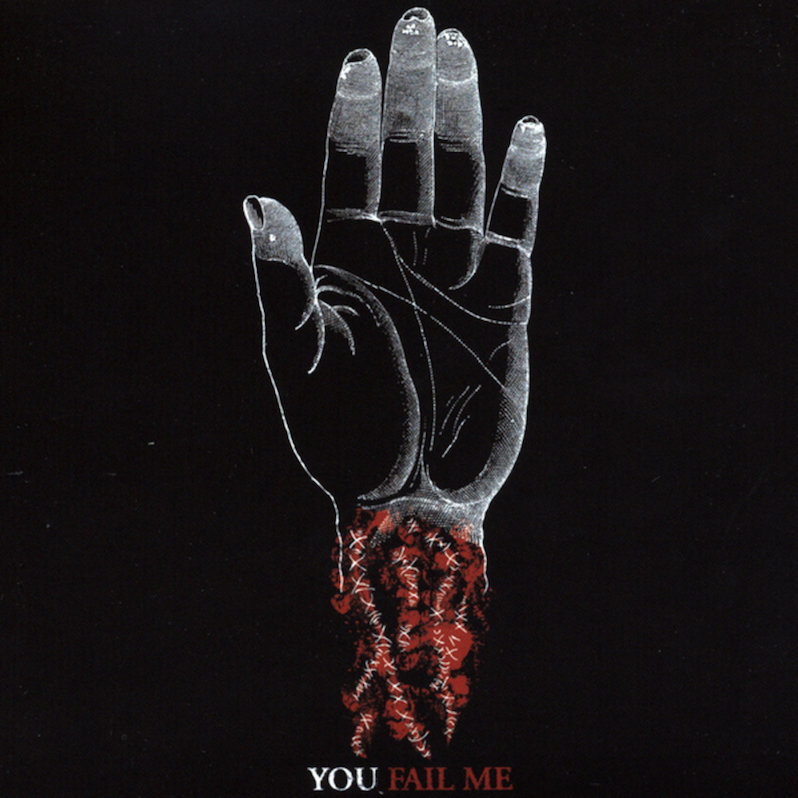 Jacob Bannon once said to me about his band, Converge, “We’re just a regular old hardcore band.”

To anyone who’s actually heard Converge’s music in the past two decades, even just a record or two, such a statement comes across as maybe too humble for its own good. I get where he’s coming from; since 1999, the Salem, Massachusetts band has operated with mostly the same lineup (guitarist Aaron Dalbec left the group after the release of 2001’s Jane Doe), and even after having amassed a huge following, they still operate much as they did 20 years ago—touring in a van, on their own, without a dedicated crew of roadies and techs.

Converge defy such humility when it comes to their actual music. Only their early seven-inches, released when Bannon and guitarist Kurt Ballou were still in their teens, bear any resemblance to Black Flag or Bad Brains. Yet in 2004, at the time they released their fifth album and Epitaph Records debut You Fail Me, anyone not deeply embedded or invested in American hardcore probably wouldn’t have understood the difference. That year, in hindsight, looks a lot like a heavy music renaissance—Mastodon, Isis, Pig Destroyer, Neurosis and Enslaved released some of their best albums to date, and Justin Broadrick made his heavy shoegaze debut with Jesu. But really, until Leviathan came along, most of the music press wasn’t paying much attention, and instead spent much of their time deep-diving into records by The Fiery Furnaces and Arcade Fire, desperately searching for synonyms for “magical.” And yes, I was one of them, if that’s important.

The band’s humble hardcore ethos means being the perpetual underdog, which in turn means always having something to prove. Not necessarily to audiences or critics or record label bean-counters, but to themselves. On this point, Converge have been pretty consistent; read any interview with Bannon, and his proudest accomplishment is invariably the last one that they’ve made. In fact, in a 2017 Rank Your Records feature for Noisey, David Anthony’s lede reads, “Jacob Bannon’s favorite Converge record is the one you haven’t heard yet.” And on that point, there’s an argument to be made, at least through the band’s perspective, that You Fail Me isn’t Converge’s best album. And a lot of fans would probably agree—the overwhelming number of Instagram and Tumblr posts showing off people’s Jane Doe tattoos bears that out. But You Fail Me remains Converge’s most radical moment of experimentation and stylistic freedom.

You Fail Me, like all of Converge’s records, is a distinctive piece of music that occupies its own unique space within the band’s overall body of work. Where Jane Doe is their most emotionally piercing, No Heroes their most direct and most recent addition The Dusk In Us their most hopeful, You Fail Me is their darkest and most harshly experimental. That’s probably saying a lot in light of Jane Doe‘s breakthrough, the poetic, wrenching document of a breakup one of extreme music’s most stunning moments of vulnerability. It was also intended to break away from what hardcore audiences expected. “I remember all of us wanting to write a hardcore record the kids were going to hate,” said bassist Nate Newton in an interview with the AV Club. I can only imagine what they thought of what came next.

There’s no visceral burst of aggression and rage in the same vein as its predecessor’s “Concubine” at the beginning of the album. “First Light” isn’t even really a song so much as a shadow—a melancholy drift of a melody that pulls the listener closer and weeps more than seethes. On You Fail Me, Converge take their time to ignite and take off. Kurt Ballou explained in 2005 that the album’s designed to ease you in and then back out, its structure unlike that of anything the band had released before it. It doesn’t play out like a live set, more like a personal journey—one fraught with pain and self-loathing. Where Jane Doe was narrated from a place of introspection about external factors, You Fail Me is a violent internal struggle with some of the band’s most tortured arrangements to match. “My depression kept collapsing on itself,” said Bannon in 2004. “At that point I stopped hoping and searching and I took a long hard look at my life and at my heart. I did a huge amount of soul searching and found so much failure within myself.”

The album is bleak and seething, constantly gnashing its teeth and caught up in a tempest of rage and disgust. The blistering “Eagles Become Vultures” is a cynical indictment of selling out one’s principles (“In new day dreams a promise gives away/To a star struck death and a gold disease“). “Black Cloud” displays a sense of determination and will against what the protagonist sees as an inevitable darkness (“black cloud gaining“), and the minute-long “Hope Street” is more accurately a sprint along an avenue of despair: “You kill new hope with old pain/No one will break your fall.”

It’s in the moments where Converge stray the farthest from their hardcore roots that the album opens up into something more musically fascinating, in addition to finding Bannon delivering some of his most gut-wrenching lines. The title track is a roaring, guttural dirge that moves at a fraction of the pace of most of the songs here, borrowing some apocalyptic bile from the likes of Neurosis and Godflesh as Bannon barks, “You think you are tragic, but I know you are lost/You have walked the fault lines, and you have crossed them all.” Directed at someone else, it feels as much empathetic as it is outright angry, but when viewed as a scream into the mirror, it’s utterly harrowing. The more atmospheric, Swans-like dirge “In Her Shadow” is much prettier yet all the more unsettling as a result, Ballou’s eerie slide riffs crafting a haunted, desolate atmosphere. It’s chilling.

Yet no song here is as emotionally penetrating as “Last Light,” and it’s an anomaly. Juxtaposing relatively restrained post-hardcore guitar riffs against drummer Ben Koller’s machine-gun rhythms, it’s a ball of tension fit to burst from the jump. But there’s another reason why it stands apart from most of the other tracks. Though it sits at the beginning of a descent into the most jagged depths of the soul, it’s the song that carries the greatest amount of hope and resolve. “Keep searching, keep pushing on,” screeches Bannon. “This is for the hearts… still… beating.”

The creation of the album wasn’t without its own failures. At the time of its recording, the band’s first at Ballou’s Godcity Studios in Salem, the summer heat created brownout conditions that led to half a day’s work being lost on a few occasions, which led to what the band came to see as a rushed finished product, in spite of the quality of the material. In 2016, Ballou returned to the album to remix it, with a new master from original producer Alan Douches. And the difference is noticeable—listen on vinyl and there’s more depth. Less sandpaper, more inferno. Though even as a band that’s always striving for something greater, always looking to challenge themselves above all, Converge holds this album in high esteem, their own perceived flaws and all.

“I liked the sound of it. It’s a raw and unmetal-sounding record,” Bannon told me in 2018. “But we were under so many time crunches, and one thing that kept on happening was that the power kept going out on the block. So we had an engineer that we were paying by the hour, and we’d get two and a half songs in and the power would go out. We’d lose all of our work up to that point. That happened multiple times during that session. So we rushed toward a finished mix of that record and we weren’t 100 percent happy with it.

“But we’re also aware that even flawed records are good sometimes.”

In 2016, Converge put on four performances of a show they dubbed “Blood Moon,” comprising their longest, darkest, most spacious and epic material since Jane Doe, as well as a cover of The Cure’s “Disintegration.” (They’ve also recorded an excellent cover of Depeche Mode’s “Clean,” though that apparently didn’t make the cut.) It speaks volumes that material from You Fail Me comprised one-third of the set. It’s an album that builds epic, breathtaking pieces of metal and hardcore in the likeness of its personal demons. It’s something that finds beauty and majesty in hopelessness, endless possibilities in utter anguish. Not so much an argument that great art comes from suffering, You Fail Me instead shows the flipside of that—that one can forge a positive and stunning path forward even when faced with that suffering. That’s a pretty profound thing to take away from a regular old hardcore band.