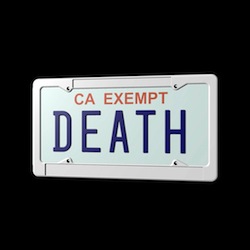 Death Grips are almost always described as [something]-hip-hop. That something ranges from “electro” to “punk” to “industrial,” and most commonly, the ultimate cop-out descriptor for any and all unconventional music: “experimental.” “Experimental” would imply that Death Grips don’t know the outcomes of their actions, that they’re a music industry wildcard pulling stunts at random without rhyme or reason. As if when they skip out on one of their shows it’s because of apathy, or as if when they go against a major record label and release an album for free, it’s because of some internal miscommunication. However, even more disturbingly, these antics seem to be thoughtfully planned. Festival no-shows were followed up with unapologetic statements and the NO LOVE DEEP WEB album leak served as a premeditated “fuck you” to major labels. Death Grips have nurtured a strange kind of crazy — one that’s perpetually captivating, never corny, and continuously evolving.

A little background on Death Grips: formed in Sacramento in 2010, the group consists of MC Ride on vocals, Zach Hill on production and live drumming, and Andy Morin also on production as well as live synths and sampling. But for those unfamiliar, this video of the group’s live performance is probably a better catch-up on their general M.O. Death Grips’ shows are known for conjuring swaths of slow-moshing bodies accented with energetic bursts (as seen in the above video). Government Plates, their fourth album, leads off with one of those bursts 20 seconds into the Dylan-referencing “You might think he loves you for your money but I know what he really loves you for it’s your brand new leopard skin pillbox hat.” The beat is a red hot combustion of bass to which emcee Ride adds some lighter fluid with typically despotic and twisted lyrics: “Hijack, no questions asked / stretch you out like latex mask.”

Government Plates is more explicitly based in electronic music than previous Death Grips releases. “Big House” first disorients with an above-the-speed-limit synth loop that sounds like the product of Giorgio Moroder on PCP. “Whatever I Want (Fuck who’s watching)” is an extended, almost seven-minute descent pulled along by another warped New Age synth loop and complemented with ambient interludes that sound like they could fit on the new Oneohtrix Point Never disc. “Birds” is an album highlight that was actually released in late August, and apart from the strong flex hook, the beat is surprisingly slow and plodding, tipping Ride’s lyrics from violent to lustful without curbing the psychosis: “I got right now between my legs / I put right now between your legs.”

Death Grips are the type of group that breaks algorithms. Look up their first page of similar artists on Last.fm and you’ll find a few bands that expose the site’s preference for shared listeners over similar sounds (Animal Collective and Neutral Milk Hotel are falsely the 6th and 7th most “similar” artists respectively). Spotify seems to be even more confused, listing the Wavves-affiliated instrumental hip-hop / chillwave project Sweet Valley as the most similar artist. And one comparison that understandably comes up frequently is that of the Odd Future crew. At first listen an Odd Future track such as “Yonkers” captures some of the framed insanity that Death Grips nail, but after a few albums Tyler The Creator has lost his edge, leaning on shock value in place of inhuman but compelling trains of thought. That’s perhaps the most impressive aspect of Ride’s act, when he screams “FUCK, KILL, STEAL SHIT,” it doesn’t feel like an appeal to ten-year-old boys, it’s ultimately just the colors of the anarchist world in which he lives. Death Grips is hip-hop in the sense that there’s a beat and an emcee, but no single qualifier can elucidate the rage, aggression and madness that is their music. No matter though; putting one of contemporary music’s most consistently exciting acts in a box or opting for a quick explanation is useless.