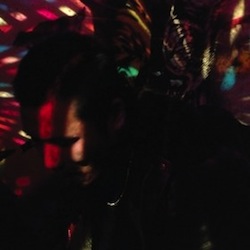 Alex Zhang Hungtai, aka Dirty Beaches, tends to have a pretty intense presence. Onstage, when touring behind his debut album, Badlands, he performed alone, no band to support him other than a trusty sampler and some effects pedals. And yet these few tools, along with a comb to run through his perfectly coifed pompadour, is really all he needs. To try to crowd his Suicide-via-Roy Orbison rockabilly nightmares with unnecessary embellishment would be to take away from the full experience Hungtai’s avant garde pop encapsulates. Dirty Beaches’ music doesn’t just entertain, it haunts and creeps its way into the subconscious. It is pop music, technically, but in its weirder moments, it feels a bit like Hungtai is channeling it more than merely performing it. Like, say, if he were visited by a giant in a dream, only to decode these subliminal encounters into twisted and extra dark variations on ‘50s-era rock music.

Since then, Hungtai’s intensity has escalated, his muse leading him down tortured, darker pathways. When he first released “Love Is the Devil,” the ambient, instrumental title track of the second half of Dirty Beaches’ new album, Hungtai did so with a candid, emotional message via Twitter: “I need to get this off my chest. This title track has blood & tears all over it and is the sound of my empty self. I need to share this before it becomes something else. We always hurt the ones we love the most. I’m a rotten piece of shit. Blast it LOUD if your heart’s broken.”

“Love Is the Devil” isn’t a party jam, or a seething punk rock song, or a crushing blast of primal industrial. It’s a mournful blend of synthesized strings and mellotron, much prettier and morose than the vaguely menacing rockers and ballads from Dirty Beaches’ first album. But it’s also easy to hear the catharsis in it. It sounds like a broken heart, if not a broken spirit, though it’s one of only a few of its kind throughout the whole of Drifters/Love Is the Devil, a complex album split into two distinct halves, each bearing its own character and aesthetic. The second half, Love Is the Devil, is the more abstract of the two, all but one of its tracks entirely instrumental and largely suspended in an insular dreamlike state. The other, Drifters, is darker and noisier, not quite in the same way Badlands was, but not too far off either. It’s not quite a yin and yang pairing, but a complementary one, each driven to darkest extremes, with results that land on dramatically different terrain.

Conceptualized, if abstractly so, as a journey through seedy neighborhoods and red light districts, Drifters is rife with ominous effects and chilling buzz. Hungtai is still heavily invested in reverb, yet where before he used it to cast an eerie shadow behind his garage rock songwriting, here it lends an ethereal mist to more beat-driven songs, the likes of which sometimes recall early electro or industrial acts like Cabaret Voltaire. He does booming space-funk on “Neon Walk,” a Marc Bolan séance on “I Dream in Neon,” and grotesquely mutant funk on “Casino Lisboa.” Almost every song here is more danceable than anything Hungtai has written in the past, but in a truly fucked up way. It’s more like dancing as exorcism, as if the relentless pulse of Dirty Beaches’ primitive drum machines are the only things keeping the beasts at bay, though not necessarily for long. The French-sung “Au Revoir Mon Visage” brings a terrifying percussive sputter, a drone that gradually escalates in volume, and a vocal performance that’s just this side of primal scream therapy.

The final track on Drifters, “Landscapes in the Mist,” is the least immediate, itself a strange humming epilogue that closes out a half-hour of debauchery with a walk back through a dizzy purgatory. Yet it marks a perfect transition to the slightly less creepy, yet similarly nebulous instrumentals of Love is the Devil. “Greyhound in the Mist” is essentially a continuation of the ideas on “Landscapes in the Mist,” albeit with the bright reds and black muted to a somber grey. Here’s where Hungtai shakes off the sweat and adrenaline and introduces the blood and tears to which he alluded. Though he doesn’t say much in these songs (“Like the Ocean We Part” is the only song with vocals), the wobbly minor-key arrangements say plenty on their own. Melancholy (“Love is the Devil”), funereal (“This is Not My City”) or just plain out there (the alien bleeps of “Woman”), Love is the Devil is both curiously beautiful and quietly devastating, in much the same way James Leyland Kirby’s work as The Caretaker is.

The intensity and darkness that Hungtai brings to his work has always been more of a benefit than a liability. That’s true of any artist lionized for their bleak or harrowing works of art, for the most part, though darkness in itself is rarely enough to connect with an audience on a wider level. Dirty Beaches’ new double LP is neither hopelessly difficult nor inaccessible, but rather outlined with a lingering dread that deepens its mystique. Drifters/Love Is the Devil is a wonderful listen, but potentially dangerous when consumed during a personal low.