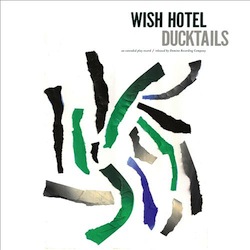 If there’s a complaint to be leveled at Ducktails, it’s one that primarily concerns their tendency to be a little too soft. The band, which begun as a side project of Real Estate’s Matthew Mondanile, certainly takes its influence from softer genres, like lounge and sophisti-pop, and more than a few moments on most recent album The Flower Lane came across like a hybrid of chillwave and yacht rock. Whether or not that’s a good thing depends mostly on how you feel about chillwave or yacht rock — I found the album charming and endlessly listenable, as much confection as palate cleanser.

On new EP Wish Hotel, that light, easy-going sound doesn’t change much. There are new variations on the New Jersey band’s shimmering, gorgeous new wave pop, and some of them are perfectly stunning. Opener “Tie-Dye” in particular finds a wonderful synergy between space-age synthesizer sounds and gentle, jazzy guitar licks. And Mondanile builds up to a bigger, Beatlesque pop song on “Honey Tiger Eyes,” the mixture of reverb-heavy vocals and psychedelic effects like a Garage Band “Strawberry Fields Forever” in miniature.

But where The Flower Lane felt like a strong, cohesive whole, Wish Hotel doesn’t hold together quite as well, its sequencing a bit too frontloaded and its back end comprising flimsier B-side material. “Jazz” is essentially disposable, its elements on paper looking like Stereolab, but in practice coming across like Steve Miller Band doing some lazy riffs on Dave Brubeck. And the pulse of synthesizer on “Nave Music” feels chintzier than usual, hitting the chillwave comparison a little too directly on the nose, even if Mondanile has more or less grown out of it.

Thankfully there are redeeming moments like the title track, which feels the most fully formed of the tracks here, and the closest thing to an outtake from The Flower Lane. The key ingredient is Mondanile’s guitar, which remains a mesmerizing, glimmering constant while other instrumental diversions take over. It’s still about two minutes too long, an extended guitar solo occupying most of its real estate, but it’s a better example of what Ducktails does right than what comes after. Ducktails began as a home-recorded project, and Wish Hotel is a continuation of the same aesthetic — raw, fuzzy and endearingly imperfect. It’s hard to fault Mondanile for returning to what’s familiar, it’s just that much more frustrating when you know he can do better.