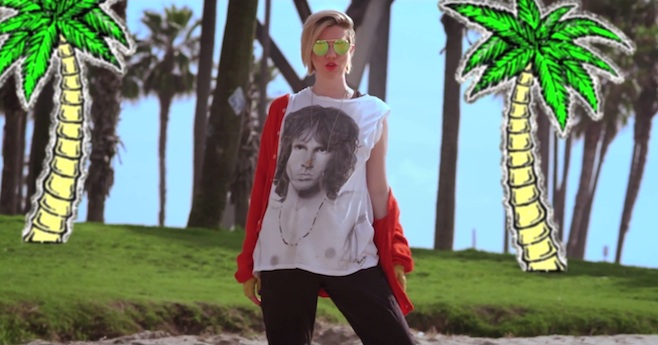 Erika M. Anderson, aka EMA, has just debuted the video for “So Blonde,” from her upcoming album The Future’s Void (out April 8). The clip was shot at Venice Beach, California, and directed by Vice Cooler. It also features some quirky gifs placed in the middle of live action scenes, and those gifs were designed by Molly Soda.

Anderson released a statement about the video and the ideas behind it. She says, “The smiling blonde white woman is the most exploited image in the world. Can we talk about that? How about discussing if the selfie is a new form of feminist art or just a direct descendant of capitalist advertising? No? Hmm… Yeah, I couldn’t figure out how to put that into a video either. So how’s about I just roll around Venice Beach wearing a Jim Morrison T-shirt while gifs by Molly Soda bounce in and out? OK! That works! The semiotics of palm trees! Everyone gets the shorthand of SoCal. It’ll look great, be fun, and still gets to ask the important questions: How many bits do we have to reduce the dancing blonde babe to before she is no longer a symbol of sexiness? At what point do tits become simply bits? And who owns the sparkly dolphin anyway??”