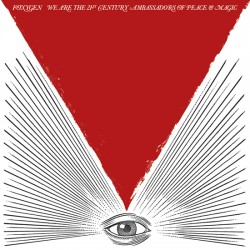 This pointed one-liner from “No Destruction,” a standout track from Foxygen’s We Are the 21st Century Ambassadors of Peace and Magic, seems like fightin’ words. And it’s certainly not the first time someone flung derision at the perceived (but very real) culture of hipsterdom in New York City’s most in-demand borough. But Foxygen, who hail from Los Angeles, aren’t just casting a critical eye at Brooklyn, but seem to have little regard for modern indie culture in general. Their inspirations are pretty transparent — Dylan, the Velvet Underground, the Stones — and the band was supposedly formed by Sam France and Jonathan Rado out of a mutual appreciation for the Brian Jonestown Massacre, a band who went out of vogue some time ago.

And yet, the irony of Foxygen’s classic rock transparency is how little it sounds like a tribute act. France yelps and howls like Mick Jagger at his Sticky Fingers best, and the lazy chug of a track like “No Destruction” has the easy-going weirdness of vintage Velvets, but at their heart, Foxygen is a unique animal. The sum of their influences is a surprisingly inspired and effortless dynamic, bolstered by freshly engaging songwriting and a charismatic sense of humor that carves a smile onto some already charming tunes. When France offers the lament “I left my baby in San Francisco” on “San Francisco,” he’s met with two equally cheerful permutations on sour grapes: “That’s okay, I was born in L.A.” and “That’s okay, I was bored anyway.”

At first glance, the duo reveal traces of an Elephant Six-style aesthetic, with vocal harmonies and horns bubbling up over the two-minute opening track “In the Darkness.” But it doesn’t take long for Foxygen to begin to revel in their kaleidoscopic weirdness. As much as “No Destruction” seems to get by on stoned lightness, it’s undercut with odd imagery about grandmothers missing limbs and a semi-hostile sneer, “You think it’s over, oh, you think it’s over/ to be someone who smokes pot in the subway with me.” Still, it’s the playful sensibility of the band that shines through brightest, which manifests in a variety of different approaches throughout We Are. There’s the blues-rock-into-psych-rock freakout outro of the magnificent “On Blue Mountain.” Or there’s also the pulsing strut of “Shuggie.” Or better yet, there’s the noisy, krautrock chug of the title track.

Much of the time, Foxygen sound mostly like they’re just having some fun in the studio, and it’s hard to be convinced otherwise. But there’s too much done right on We Are for it to be just that. Throughout the album, France offers a staggering number of positive affirmations — “You can scream and shout, if it makes you feel happy,” “If you believe in yourself, you can free your soul” — suggesting that the music this band makes holds the utmost importance. Making it seem so carefree, then, is Foxygen’s greatest trick.