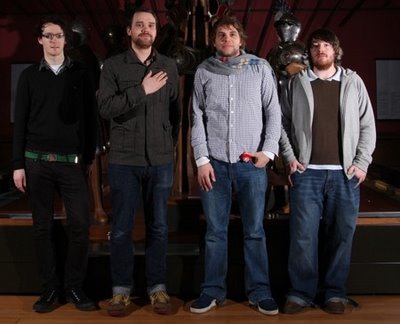 A bad crowd can sometimes ruin a good show. On the flipside, however, a great crowd can make a show seem even more special. San Diego’s Casbah is a venue known for attracting a fairly mellow crowd, but Frightened Rabbit proved to be the exception, inspiring overflowing enthusiasm and group singalongs during their powerful set. Only adding to that affectionate and energetic display was Scott Hutchison’s comment that, no matter how big the band may get, “I don’t give a shit if we ever stop playing the Casbah.”

Finger-tapping indie popsters Maps and Atlases provided an amply rocking set to warm up the crowd. Sporting thick beards and flannel shirts, the Chicago foursome cranked out a splendid set of mathematics and hooks in equal amounts from their forthcoming Barsuk debut, suitably winning over the sea of twenty-somethings in plaid shirts (myself included). Yet this was only a small taste of the rush to come.

That the show sold out more than a month in advance should have been a clue to the intensity of the evening. Balancing a scruffy, charming folkiness with the kind of bombast reserved for The Arcade Fire, Frightened Rabbit charged through a blazing, but impeccably executed set of highlights from their albums The Winter of Mixed Drinks and The Midnight Organ Fight, with the former’s epic “Skip the Youth” kicking off the show majestically. Yet the intensity only escalated from there, as they pounded out stunning takes on “Old, Old Fashioned,” “The Twist,” “Nothing Like You” and “The Wrestle.”

Yet the most touching moments were reserved for the encore, as the crowd lent backup vocals to a solo Scott on acoustic tearjerker “Poke,” and practically recited the evening’s closer “Keep Yourself Warm” verbatim. At one point the frontman even stepped back momentarily while the audience kept up the momentum, appearing genuinely moved at the sight. And I can assure him, the feeling was mutual.