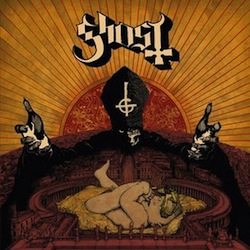 Viewed from any angle, Ghost B.C. is amusingly absurd. A troupe of robed, hooded and masked “nameless ghouls,” fronted by a corpse-painted pontiff who goes by the name Papa Emeritus, Ghost doesn’t just perform rock music in front of a live audience, they conduct a theatrical Satanic mass of sorts. There are no goat sacrifices or bound virgins or anything — just an elaborate look and lots of occult-themed heavy metal that’s endearingly and warmly accessible, despite the schtick. Yet, there’s nothing particularly scary about Ghost; to the contrary, they’re a hoot, particularly for those who like a little black humor in their rock music. They’ve covered The Beatles and ABBA (with Dave Grohl, who has given the band his stamp of approval), and inject sweetly sung lyrics about human sacrifice into songs hookier than most radio fodder. Twisted as it sounds, that kind of move takes the kind of tongue-in-cheek sensibility that eludes a lot of Hell-bent heavy music.

On the band’s second album, Infestissumam (Latin for “hostile”), Ghost B.C. are only ramping up their theatricality even further. Where the band’s debut, Opus Eponymous, found a righteous middle ground between Mercyful Fate and Blue Oyster Cult, its follow-up seems even more heavily influenced by progressive rock of the 1970s. The anonymous Swede ghouls are playing around more with song style and structure this time around, still rocking out in all the right places, but with an increased dose of experimentation. The most explicit example of these newly stretched boundaries is “Ghouleh/Zombie Queen,” a two-part track that begins as a gentle piano ballad, Papa Emeritus whispering the song’s title, yet midway through transforms into a heavy surf rock chug. The fun, melodic sensibility of the group’s breakout debut is still there, but taking on new, more complex forms.

Infestissumam is only 12 minutes longer than its predecessor, but given the band’s pursuit of the elaborate and the operatic (complete with an album cover that references “Amadeus”), those extra 12 minutes feel like at least twice that. It certainly doesn’t hurt to have a massive, over-the-top intro like the title track, a way-too-short charge of power chords and choir chants that sound far more Sisters of Mercy than Sabbath. And from there, the group maintains a balance of hookier, chugging rockers and more stylistically daring prog rockers. The fiery march of “Per Aspera Ad Inferi” is juxtaposed with the carnivalesque waltz of first single “Secular Haze.” The infectious, head-nodder of a devilish testimony, “Per Aspera Ad Inferi,” is a fist-pumping contrast to the slow-burning “Ghouleh.” It’s not quite the continuous punch that the group maintained before, but there’s a more complementary balance about the sequencing that highlights the group’s more daring diversions, without keeping much of a distance from their catchier hard rock tunes. Yet there are a few select moments, notably closing anthem “Monstrance Clock,” that balance a more complex arrangement with a soaring chorus (sing along now: “Come together, together as one/ Come together, for Lucifer’s son”).

The group’s first release on a major label, Infestissumam is a crisply produced, immaculate sounding album. Produced by Nick Raskulinecz (Foo Fighters, Deftones), the album has a radio-ready crunch to it, yet without clocking everything too far into the red. It’s surprisingly warm and lived-in, and the more prominent use of organs and analog synth give it a vintage touch to balance out the moments that actually do sound a bit like Foo Fighters (which is definitely not a bad thing). Though in some ways Infestissumam is a less immediate statement than Opus Eponymous, it’s no less tailored for broad appeal, which should prove an interesting experiment to observe the commercial critical mass of a band of masked Swedish Satanists.

Stream the new Ghost B.C. EP, If You Have Ghost