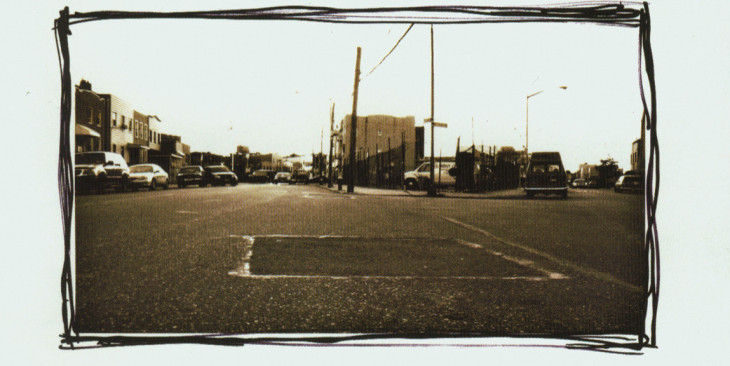 My first exposure to the Hold Steady was via a business card of the record store I worked at my senior year of college.  A regular had stopped by to peruse the new trade-ins and to (naturally) talk shop. Before he left, he asked for a pen so he could write a recommendation down for me. On the back of a Rhino Records business card, he scrawled the words, “The Hold Steady – Almost Killed Me.” I thanked him, placed the card in my wallet, and promptly forgot about it as 22-year-olds are wont to do with most things in life.

By December of 2004, I was six months removed from graduation and four months into exactly the type of job an undergraduate liberal arts degree will afford you.  As I drove to the manufacturing plant at 5 am to begin my 12-hour-shift, I popped in a recently gifted mixtape from a friend. It was the kind of Christmas cheer we as friends exchanged over the holidays before technology went and spoiled it through obsolescence. Side 1, track 1 of that tape was, “The Swish,” the second song off the aforementioned Almost Killed Me. The song immediately hit me the way eastern December air attacks a rolled down window at 55 MPH; hammering guitars, snarling vocals, and references to actresses begging for their second act peppered the song’s four-minute trek through American culture. It was classically inspired, but still undoubtedly refreshing. It was rock ‘n’ roll done how I always knew it to be, but the rest of the world seemed to never precisely execute. It was the kind of song that makes you wear out the tape it’s on. In a sea forgettable synth-punk bands clouding the independent landscape, it was magnetic hope. It was so good, that I swiftly retired that tape (and all my tapes) when I acquired a new automobile with a CD player a scant two-weeks later.

By May of 2005, my friend (the mixtape maker) had moved to Brooklyn, and as I still lived at home with my parents, I relished every opportunity to go down and visit him. This particular weekend the excuse was to check out a free acoustic show at the unfortunately now-defunct Sound Fix Records in Williamsburg. The band was The Hold Steady, and the show was to celebrate the release of their sophomore album, Separation Sunday.

By the time we arrived at the then-always store and sometimes venue, the band was already set up and ready to go, so we found two suitable foldout chairs in the third row and took our place. Budweiser tall-boy cans in hand, the band opened their set with a smile and song, and their presence as inviting everymen was quickly established (especially after the second song when lead singer Craig Finn politely asked the promoter if someone could grab the band some more beers if they were available). Finn’s banter in-between songs was endearing and unforced; whether it was relaying the origin of the tremendous b-side “Modesto’s Not That Sweet” or delving into his interest on patron saint origins before, “Don’t Let Me Explode,” each exposition reaffirmed what The Hold Steady were and currently are: genuine dudes making genuine rock music void of any pretense.

After the show, I picked up a copy of Separation Sunday, and from there through October of 2006, the disc barely left my car and to this day, has never left my head. 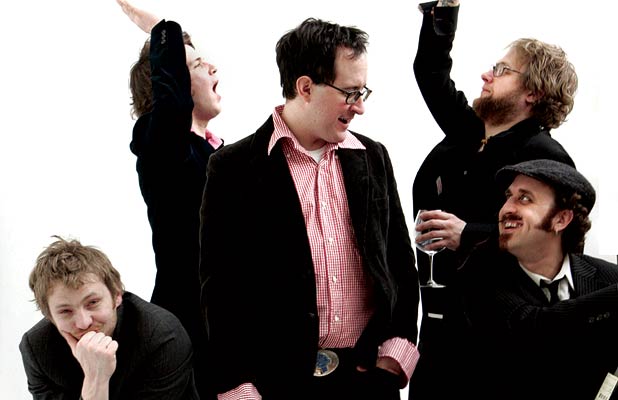 Separation Sunday begins with a warning and ends with a revelation; it travels from St. Paul to Denver (but never Dallas), and it runs with the dealers, the hoodrats, the hangers-on, and the occasional Irish poet. From hospitals to holy sacraments, the album is conceptualized around the journey of Hallelujah (though the kids call her, “Holly”) as she nods her way across America trading her body for drugs and occasionally for blood, but never giving up on the hope of elusive redemption in the form of anything other than her current life. This sort of seedy setting abounded on Almost Killed Me, but it’s on Separation Sunday that the band is able to fully realize their own vision (as well as the visions of their protagonist).

While obscure pop culture references helped wield the fabric of AKM, here religion is the omnipresent reference point. As the product of an Irish-Catholic upbringing (as well as 11 years of Catholic education), I was fully able to get the joke without relying on the aid of a search engine. From a lyrical standpoint, Finn cleverly wove tales of debauchery together with the educational spirit of a CCD class, and he did so with as much questioning as he did reverence. Perhaps this is the album’s (and The Hold Steady as a band) most impressive feat:  being able to — without irony — reference religion through each and every song without being either blasphemous or pious. For a former altar boy who also genuflected at the sound of classic rock, it was an album that was teeming with adolescent nostalgia both for its study on the saints, as much as its reflection on the sinners.

Musically, it is as much of a force as its predecessor, and although The Hold Steady will always be known for their power-chord-blessed bar rock, the album (much like the band) is more varied than it is given credit for. Anthemic, riff-based earworms such as “Stevie Nix” were off-set by the sparse, organ-and-vocal-only “Crucifixion Cruise,” whereas the serpentine stomp and strut of opener, “Hornets! Hornets!” was reined in by Tad Kubler’s calm, cool, and collected guitar work on “Charlemagne in Sweatpants.” Structurally, the album plays like the most bombastic of sermons — eschewing the typical verse/chorus format for a more free-form style that accents Finn’s storytelling prowess, as well as the band’s top-shelf soaked musicianship. Perhaps no track exemplifies this better than “Cattle and the Creeping Things,” a pulsating and raucous rumination on the origins of man’s fall from grace that features elementary lessons on our exodus from Eden (“I guess I heard about original sin/I heard the dude blamed the chick, I heard the chick blamed the snake/And I heard they were naked when they got busted/And I heard things ain’t been the same since.”)

By the end of Separation Sunday we know that Holly was the hoodrat referenced throughout, and that although she’s been thought deceased by the hometown she abandoned, her body is limp but alive, and she’s returned to the church; the prodigal daughter of Minneapolis who implores a priest to allow her to take the pulpit. She’s experienced, but still tortured, and as the sun sets on her public confession, she herself says there is no guarantee she won’t go and do it all again (a prerequisite for true forgiveness). And so her tale continues, just like a more dangerous version of yours and mine.

By the fall of 2006, The Hold Steady would go on to release another critical darling of a record that is (arguably) their most commercially adored to-date, Boys and Girls in America. This record would spawn a 14-month world tour, and would mark the beginning of my deep dive into active Hold Steady fandom. Over the course of the next few years, I would travel to over seven states, spanning 30+ Hold Steady shows. I would meet people whose dedication more than doubled that of mine. I would befriend these people, and we would carry this friendship past the exit signs of the venue, and into day-to-day life. From Stay Positive to Heaven is Whenever, my sense of adventure may have dimmed, but my love for the band, and for the community of people I met through this band, would exponentially grow.

This all started with a recommendation, followed by a simple song and a shortened acoustic set. All of these spread out circumstances led me to Separation Sunday. Much like the lucky ones in love who can’t imagine their lives without their significant others, I can’t imagine my life without this record in it. If that sounds dramatic, it’s because it’s meant to. Because this record is that fucking good.