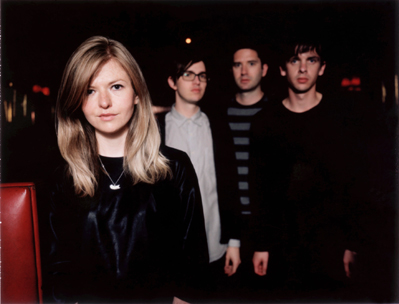 Just this past week, UK outfit Still Corners released what, sonically at least, amounts to this year’s most definitively autumnal and spooky album, Creatures of An Hour. Their Sub Pop debut is a mixture of horror movie textures, 1960s-influenced psychedelia, vintage 4AD-style dream pop and some other, less tangible, perhaps more ghostly influences. Songwriter Greg Hughes and singer Tessa Murray have crafted something truly beautiful, yet at the same time, quite unsettling. And while only a handful of other records sound anything like it (Mazzy Star and Broadcast come to mind), it’s in the company of some truly awe-inspiring and chilling albums.

As the band prepared to cross the Atlantic for a tour of the United States, and appearances at CMJ, we engaged them in some digital correspondence. Greg Hughes was kind enough to answer some of our questions.

Treble: When you began writing the album, what kind of vibe did you want to convey through these songs?

Greg Hughes: I was just getting over a bad break up so I put a lot of that into the record and it did end up a bit dark in places. I’ve also been into films my whole life – David Lynch, Hitchcock, `70s and ’80s horror movies, soundtrack guys like Ennio Morricone, Angelo Badalementi, even John Carpenter. They all evoke a certain atmosphere that I love, I tried to get that onto the record as well.

Treble: How does your songwriting process usually work? Do you prefer to tackle the music or the lyrics first?

GH: Music first usually — it can be anything, a guitar part, an organ part, even a bass line. I’ll work with Tessa and hum out some melodies, we just go from there, really.

Treble: There seems to be a contrast on Creatures of an Hour between really dreamy, pretty textures and eerie effects. What draws you to these conflicting ideas?

GH: I think they all combine to create the atmosphere I’m going for, a sense of unease, an eerinees, et cetera. Tessa brings it all to life, the soul of the record I think.

Treble: I get a really autumnal feeling from the album – how much of an influence did your environment have on you?

GH: I love Whitman, Frost, Thoreau… They write a lot about nature, describing simple things like walking through the woods and looking up at the sky once in a while. I think it’s easy to get caught up in our busy lives and forget simple things like just being outside and enjoying that. It’s all been filtered onto the record. October is my favorite month as well, the change from the summer to autumn is lovely.

Treble: Some of the songs have a vintage horror movie vibe – how much of an influence did film and film scores play on the record? Any particular favorites?

GH: Probably quite a bit. I really love John Carpenter’s work. I was watching “The Fog” too many times the last year.

Treble: Now that the band has expanded to a quartet, how much did the songs evolve to adapt to live performances?

GH: It’s great for the live performances, we try to inject some more energy into the songs, pick up the pace a bit. We use projections and turn the lights down and try to create an atmosphere to go with the music. We don’t do too much on stage, no feet up on the monitors or knee slides so it’s good to have something to watch.

Still Corners : Creatures of an Hour