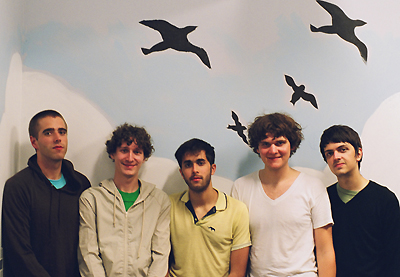 Wednesday night, 7 p.m. The sun is beginning to set at the Mira Mesa Epicentre, an all ages music venue located in suburban San Diego. Members of the night’s headliners, Elefant, and their road crew are throwing a Nerf football around the parking lot, while joined by a pair of Avril Lavigne look-alikes, perhaps part of the band’s entourage, perhaps just a couple of local girls. Austin quintet Voxtrot is ready to begin their set within a half hour, waiting outside in the meantime, as the sun sets.

The band is slightly confused at the setup. The venue is, by day, a youth center with built-in record store. It’s also within walking distance of a police station, a convenience that may comfort parents, but seems somewhat contrary to it being a rock `n’ roll venue. And, of course, the band seems slightly disappointed that the evening guarantees a total absence of alcohol. None of these factors prove detrimental to their live performance, however, an exciting and energetic set of songs from their Raised by Wolves and Mothers, Sisters, Daughters and Wives EPs.

After just one song, Ramesh Srivastava, Jared Van Fleet, Jason Chronis, Mitch Calvert and Matt Simon are met with a densely packed audience, previously distracted by each other’s conversations and now thoroughly engulfed by the band’s soaring pop anthems. Some shout requests, many are singing along, and for the band’s first performance in San Diego, they seem to have drawn quite a respectable crowd, even more impressive considering they’re one of the opening bands. After unloading their gear, the band is greeted with autograph requests. Two boys even ask Ramesh to have their picture taken with him. Polite and gracious gentleman that he is, Srivastava obliges, soon to become the star of someone’s MySpace photo.

Some might call this assemblage of starry-eyed fans a sign of success, and one would only assume that this is just a stepping stone toward bigger things. Having been a band on and off for the past several years, Voxtrot, at first, wasn’t the full-time band they are now. Srivastava took time out of playing music while attending school in Glasgow, but ultimately choose to put scholastics on hold to come back to the band, which he now fronts. However, according to Ramesh, it wasn’t until about a year and a half ago when the drive toward being professional musicians truly set in, after their first show in New York, which was went surprisingly well.

“We went on one tiny little tour and then we didn’t do anything until this past June,” Srivastava said on a picnic table outside the Epicentre. “But then James Minor signed on as our manager. And he was the first guy to kind of give us a chance in Austin, and he said, `I think you could really do something with this.’ And all the other dates were really dismal, but that one was really well promoted and everyone was really excited. I guess now I see it can work in Austin and it can work outside of Austin.”

Since then, many bloggers and zinesters have championed the band, posting mp3s, such as their first single, “The Start of Something,” and quickly adding to the band’s following. Their first EP, Raised by Wolves, followed in the fall of last year, a delightful blend of twee-pop, garage rock and post-punk that defies any obvious comparisons, yet hints at bands ranging from The Walkmen to the Smiths to Belle and Sebastian. Since then, the band released a second EP, Mothers, Sisters, Daughters and Wives.

Listening to Voxtrot’s two releases, one can easily pick out the differences between the two. Though the general style is similar, Raised by Wolves seems simpler, while Mothers, Sisters, Daughters and Wives is largely a densely layered affair. Strings and horns enter where there were none before, and even the guitars sound more powerful. Part of this can be attributed to more resources at the band’s disposal, primarily a wider arsenal of musicians.

However, part of this difference also lies in the recording, the former being a mix of different sessions, while the latter was recorded as a self-contained EP.

“The first EP was made up of songs that existed, like `The Start of Something’ is really old—it’s about three years old,” Srivastava said. “And the other songs had come about between then and when it was recorded. So that was more compiled together, because we had never put out a recording before. And the second was more of a concentrated effort, all written and practiced very close to each other.

“I guess with the second one, because it was planned, we felt more like if we were going to record this new EP now, we wanted to involve strings and stuff. We were lucky enough to find really really talented string and trumpet players who did everything for free, because they’re all friends of ours.”

Both of Voxtrot’s EPs were released on Cult Hero records, a small imprint owned by Srivastava and Calvert. To date, the only other band to have had the privelege of releasing anything on the label is Sound Team, a band of Voxtrot’s comrades from Austin. Nonetheless, through their own resources, the band was able to release their own material, and would eventually like to work with more artists.

“We wanted to start it to put out other bands as well, but that was two or three years ago,” Srivastava said. “We put out this Sound Team EP when they went on tour with the Walkmen. And we sold all of those. And then we put out our `Start of Something’ single and just last year we sold the last one. We basically started it to just put out ourselves, but in the future we want to put out other bands. But it’s hard to do that, you have to have a lot of money to do it right. I think one day it’ll become a project again for other stuff.”

Since then, other labels have shown interest in the band, and though nothing has been finalized as of the time of this interview, there is a strong possibility that by the time the band releases a full-length (which is projected for this fall, at the moment), it will quite possibly be on a different label. In any case, the interest is there, and through various channels, not the least of which is a strong devotion to touring, the band has built up interest and a larger fan base.

As the band can only get bigger from here on out, they still travel in an Econoline van, carry their own gear, sell their own merch and commit themselves to being a committed, hard working band. Having learned a few things about being a full-time band since they began touring, none of these gents are ready to make any assumptions about what the future holds for them.

“We did the one tour, but other than playing South by Southwest once, we didn’t know anything about how people respond to it,” Srivastava said. “I was kind of naive about the music business. The first time we went on tour in the west coast, it was weird because people from Capitol Records would come out and I would think, oh this means, suddenly you have a career. But it’s not true. No matter how much popularity, not even popularity, but no matter how much you think people are really responding to your music, you can get emails from all over the world, to really be able to do this for a living is a long process.

“I feel really fortunate that we’ve had a lot of really automatic response, but it’s been a really long, intense process,” Srivastava adds. “When things happen people think, ‘isn’t this great? You’re about to sign this thing, isn’t this living the dream?’ And you go ‘well, kind of,’ but that was the goal in the first place and you’ve worked for it this whole time.

“So when things happen, you feel lucky, but you feel, maybe kind of deserving.”