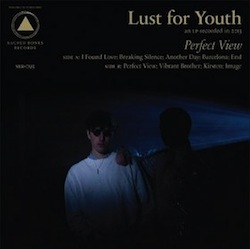 With roots in early, synth-based post-punk and coldwave, Lust For Youth keeps to a minimal set of elements and milks them for all they can. How appealing that sounds probably depends on how much affection you, as a listener, have for dark, gothic analog synth sounds and effects-laden vocals, disappearing into a reverb- and delay-addled ether. Yet Norrvide manages to do a lot — or at least conjure the illusion of doing a lot — with very little. Each of the songs on second album Perfect View comprises little more than a melody line, a bassline, a fairly simple beat, and either vocals or samples of vocals. That’s about it.

Within a fairly simple framework, however, Norrvide finds new approaches and avenues to explore. A laughing woman’s voice blends in with Norrvide’s own deadpan chants on opener “I Found Love,” an etheric, pulsating introduction to Lust For Youth’s shadowy underworld. The decidedly more accessible “Breaking Silence” bears a passing resemblance to early Depeche Mode, while “Another Day” bounces with vibrant club appeal. And that’s more or less how the album progresses, with different shades of gray and black, and the occasional punctuation of light-hearted found sound. Perfectly enjoyable in small doses, Perfect View is the sort of record that makes more sense either live or on a DJ’s turntable. It’s nice enough to listen to, but seems like the kind of thing that needs to actually be felt to leave its proper mark.