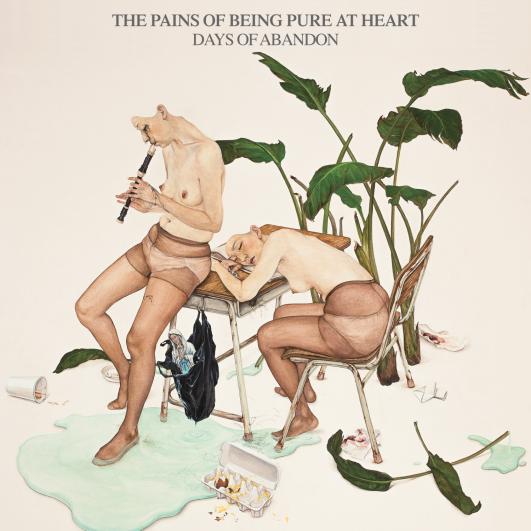 Days of Abandon, the third album by Brooklyn’s The Pains of Being Pure At Heart, begins with only the sound of band leader Kip Berman singing softly and strumming his acoustic guitar. It’s fitting that this is how Berman reintroduces himself and his band on this third outing; since the beginning, Berman has been the only permanent member of the band. And with each iteration, The Pains of Being Pure At Heart takes on new shape. On their warm, fuzzy self-titled debut, the group found a comfortable niche between twee pop and shoegaze, jangling like Orange Juice with love songs set in libraries, against a heady wall of Isn’t Anything distortion. And on Belong, that meaty, crunchy sound only grew bigger, expanding into a miniature epic that roared with Smashing Pumpkins’ Siamese Dream as its guide.

With “Art Smock,” however, Berman seems to be hitting the reset button again. A far gentler track than anything on the band’s previous album, it’s the sound of scaling back and taking a breath. What’s not necessarily so surprising is how pretty it is; even at their noisiest or most powerful, The Pains of Being Pure At Heart have always written pretty — and for that matter, catchy — songs. In that regard, Berman hasn’t changed a bit on Days of Abandon. It’s as heavy on hooks and melody as the band has ever been. It’s just that it’s not particularly loud; Berman says in a press release that he didn’t want to make “Belonger,” and so the group transitions from eardrum-piercing shoegaze to shimmering dream pop. And they do so without even blinking, turning down the distortion and ushering in another solid set of wonderfully crafted, sensitive-kid indie pop.

It’s also fitting that the first full-band track on the album is titled “Simple and Sure.” In a sense, it’s where the pieces begin to come back together after the first track’s reset. But there’s something new here that’s unavoidable: a more pronounced female vocal presence, which not only opens the track, but enhances it by fleshing out an already pretty song with even prettier sounds. In particular, Jen Goma — also of A Sunny Day in Glasgow — proves to be an incredible asset to the record, taking the lead on the Smiths-like “Kelly” and the Bacharachian dream-pop of “Life After Life.” She’s not so much a foil to Berman — whose own vocals are comparably airy and sweet — but another layer in a band that continues to grow and take new shape as time keeps moving forward.

No matter how much Berman & Co. scale back, though, there’s no getting around the ambition and scope within their songs. Take the six-minute “Beautiful You” — an unusually long track for the band — which takes on a swirling guitar sound highly reminiscent of The Cure’s Disintegration. Sure, Berman himself might not be the stereotypical rock star, but even for a songwriter who has embodied the old-school ideal of an indie rock nerd, there’s always something much bigger and expansive happening in his songs. The Pains of Being Pure At Heart may very well be thinking smaller on Days of Abandon, but it’s only in their nature to seek out something big.

Tags
The Pains of Being Pure At Heart

The Pains of Being Pure At Heart announce Hell EP

Stream the new The Pains of Being Pure at Heart album