Buzzfeed is a part of our lives. It doesn’t feel right saying that, but it’s true. We’ve all wasted countless hours on its gif-heavy lists and personality quizzes. I mean, there is actual journalism and long-form writing on the site, if you can find it, but let’s get real here: We’re all there to find out what Buffy the Vampire Slayer character we are. (I’m Cordelia, apparently.) I’m also Kim Deal, Sleater-Kinney, Darryl Philbin, Pete Campbell (didn’t see that coming), and should live in Portland.

But, for as much time as we spend taking these quizzes — that, okay okay, are kinda fun — I couldn’t help but take offense at the “How Much of a Music Snob Are You?” quiz that just launched. Put together by Matthew Perpetua (who is a real music writer… or, at least sometimes anyway), the quiz gauges your snobbery by how much you know, how much you spend on music, and how much enjoyment you get out of humiliating people that don’t know as much as you — something we all aspire to, I’m sure.

In spite of that one year when my college friends called me a “music nazi” (not cool, guys), I’ve gone out of my way to not be the jerk that berates you for what you like or what you don’t know. I’m not that guy! (Nobody wants to hang out with that guy, let alone listen to what he has to say about music.) And Buzzfeed confirmed it: I got 40 out of 100, which means I’m a nerd, but don’t feel the overwhelming urge to proclaim it from on high. (Okay maybe just this once: I’M A MUSIC NERD! WOOOOO!)

Still, this quiz sort of stuck in my craw. Sure, it’s supposed to be fun and has no real bearing on who I am. So why do I feel so insulted at what Buzzfeed is insinuating about me as a music lover? I don’t care about “selling out,” or whether someone disagrees with me, or how many The Fall studio albums you’re supposed to own. And I abstain from mansplaining as much as possible. I thought this survey warranted some longer answers. So I supplied them. Let’s take a second look at some of the more eyebrow-raising questions on this Buzzfeed music snob quiz.

Felt like ranking your favorite music of the year was a necessary thing to do?

Guilty as charged. We did this just a few months ago.

Skipped over someone on a dating site because they have bad taste in music?

I’m married and my wife’s taste is awesome. Not that it necessarily matters, but if I’m going to see as many shows as I do, it’s better being with someone who actually wants to go with me.

Shamed a younger person for not knowing a musical reference that was before their time?

I don’t shame. In fact, when I was in college I had a boss who tried to oldsplain that a colleague’s ringtone was Star Wars. It was Raiders of the Lost Ark.

Corrected someone for getting a minor fact about an artist wrong?

This happened to me just a week ago, and I’ve vowed never to be the wrong one again. Never!

Been annoyed when everyone starts liking something you liked a year ago?

Only if it means they were ignoring me for a year.

Forced someone to listen to something obscure because you wanted to “educate” them?

Oh, boy, here we go. Just six questions in and I’m already being accused of mansplaining? (Or at least snobsplaining…) Just take it down a notch, m’kay BF?

Been dismissive of someone buying a greatest hits album?

Only when it’s Lenny Kravitz.

Had elaborate rules for the sequencing of mix tapes and CDs?

It’s more about a feeling. I gotta vibe on a tracklist before I … I’ve said too much, already.

Loaded your phone with new songs before a party, just in case?

Am I hosting the party? If so, then I’ll make a playlist. Otherwise I’d be a pretty rude guest if I was trying to undermine the host’s musical choices, now wouldn’t I?

Been annoyed at someone DJing from an iPod?

Nope. My wedding was iPod DJ’d.

Complained about something being “overproduced”?

Made a point of telling people that you preferred an artist’s earlier work?

Well, I mean, I did like Steely Dan better when Chevy Chase was in the band…

Insisted that a demo version of a song was better than the finished studio version?

Yes — Elvis Costello’s “Green Shirt.” But I prefer the studio version of “Surf’s Up” with all the lush Van Dyke Parks stuff. It evens out.

Insisted that a song (or an artist) is much better live?

Everything’s better after a few drinks.

Insisted that a remix was better than the original version?

Believed that other people are too dumb to “get” the music you enjoy?

Said “there’s nothing good on the radio”?

Only on an hour-by-hour basis. You turn on San Diego radio on a Sunday afternoon and tell me there’s anything worth listening to.

Had your brain shut down upon being asked “what kind of music do you like?” 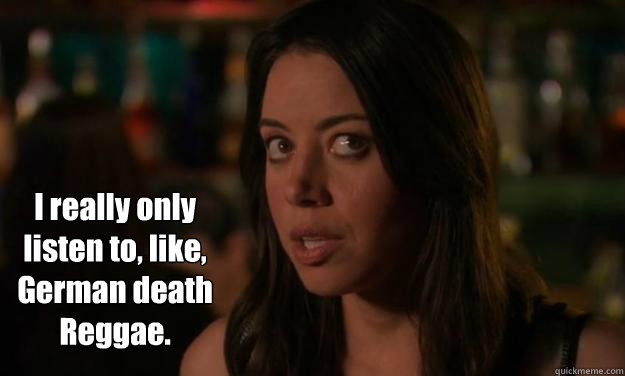 Stopped liking an artist because you’re embarrassed to be associated with their fans?

No, but I’ll tell you this much: The oldest I ever felt was at a Girl Talk show. Damn kids…

Avoided going to see a band in a large venue?

Well, yeah. But that mostly depends on whether or not I can get my car out of the damn parking lot before 4 a.m.

Left a show because you were annoyed with the crowd?

I actually stuck around at that Girl Talk show. So, no.

Been to an illegal warehouse rave?

No. I’m a law-abiding citizen, officer.

Bragged about seeing a band before anyone else knew them?

No. It’s usually the other way around; when I ask “who is this god-awful band?” they end up getting famous. (See: My Chemical Romance)

Worked at an independent record store and made someone feel bad about what they were buying?

The great thing about America is that you don’t have to work at an independent record store to make someone feel bad about what they’re buying.

Had a college radio show?

Yep, for four years. I miss it.

Had a krautrock phase?

I don’t want to live in a country where enjoying Tago Mago is considered a phase. (Oh, that did make me sound like a snob, didn’t it? Fine: You win this round Buzzfeed…)

Told someone that you think international pop music is better than American pop music?

No, but I’m not sure there’s been a pop song I’ve enjoyed in the last 10 years more than Rachel Stevens’ “Some Girls.” Except for something by Robyn. They’re both European. Nothing to see here, folks…

Acquired a copy of every single thing a band has ever released? (EVERTHING.)

I’d say yes but now I feel like the quiz is the one being the snob.

Traveled out of your way to go to a record store?

I mean, I didn’t realize the store that special ordered something for me was in Hemet, but you live and you learn.

Actually worried about the quality of your home stereo?

Keeps me up at night.

Been anxious about the bitrate of audio files?

Have you ever been mad at someone for ripping an mp3 under 320kbps?

I don’t want to talk about it.

Insisted on listening to lossless audio files like FLAC?

No, I save all of my digital music anxieties for MP3s.

Been actually ANGRY about the “loudness war”?

I mean, of all the things to be angry about…

No, but every time iTunes files something under “Compilations” I inadvertently find myself on the business end of some hijinks and comic mishaps. Hilarity, my friends.

Organized your mp3s by BPM?

Bought a turntable and vinyl records after 1990?

Well, I did just write something about this.

And I quote: “I liken it to eating at your favorite diner or greasy spoon café. Yeah, maybe you don’t really taste the beef for exactly what it is, but something about that layer of grease makes it taste that much better.”

Does shipping from the UK count?

Laughed at someone for not being able to identify a sample in a song?

Accused an artist of “selling out”?

I’m taking a Buzzfeed quiz — I’m not sure I want to get preachy on this pulpit.

Bristled at a pop song snuck into an otherwise niche DJ set?

The only acceptable pop hit to play during a DJ set is Eddie Murphy’s “Party All the Time.”

Contributed to a zine?

A few, actually. Christopher Weingarten’s It Takes a Nation of Millions to Hold Us Back is really good.

Submitted a proposal to write a 33 ⅓ book?

I did. It was on Sleater-Kinney’s Dig Me Out. They didn’t accept it. (*shrug*)

Bluffed your way through a conversation about an obscure artist you actually didn’t know much about?

Oh, you mean that Licorice Comfits album with Cheryl Ladd on the cover? Oh, but you didn’t see the cover because it was dubbed to tape…

Shamed someone for buying music at a chain store?

Chain record stores? That takes me back…

Shamed someone for wearing a band’s t-shirt at the band’s concert?

Actually, seeing David Bowie t-shirts from 1983 during his Heathen tour was kind of amazing.

Planned out the music played at your wedding even if you’re totally single?

I am married, and yes. (Why do you keep assuming I’m single? Not cool, ‘Feed.)

Had a song or artist ruined for you because you associate it with an ex?

That was too long ago for me to care.

Bought tickets to see a reunion show even though you kinda knew it’d be disappointing?

Remembered parts of your own life based mainly on what you were listening to at the time?

I actually have this project I’m doing… and that brings me to our final thought.

Music touches us in ways that can be surprising — even unique. You become so familiar with artists’ work that you form close attachments to it. And I feel no shame for saying that. It’s a very personal thing, and for that reason, I’m not going to browbeat someone with a condescending viewpoint over what they should know or what the right opinion is. I love to discuss music, but I don’t love to start fights over it. I get much more enjoyment over using music as a way to bond with others, or simply listening in solitude to songs by my favorite musicians.

…Not that you’ve heard of ’em or anything.

Pet Grief: The Top 10 Responses to our Metal list