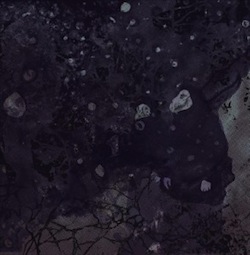 Based on the external ephemera surrounding Texas duo Pinkish Black, one can easily get the impression that they’re a metal band. The music they create is certainly dark and heavy, which caught the attention of metal press in 2012 after the release of their self-titled debut. They play shows with other metal bands, show up most prominently in metal mags, and released their second album, Razed to the Ground, on long-running metal label Century Media. Convincing enough, I suppose, but as Pinkish Black’s music is concerned, there are no brutal guitar riffs to be found — there aren’t even any guitars. Daron Beck and Jon Teague develop their dense, haunting atmosphere via synthesizer and drums, updating the textures of ‘80s goth-rock and post-punk with an even greater penchant for doom.

Razed to the Ground is a further refinement of the band’s synth-based doom-punk, and even more than their debut, it finds Pinkish Black striking an impressive balance between seductively chilly melodies and bone-chilling atmosphere. Though the group nailed the atmosphere down pretty tightly the first time around, here it benefits from even stronger songwriting. A track like “Kites and Vultures” doesn’t just get by on the shadows that loom across its walls or the beasts that howl beneath its floorboards — it’s a beast of its own, pulsing with a furious rhythm and a much-welcome immediacy. And on “Rise,” Beck and Teague create a tension ripe for a climactic break, which does quite nicely, Beck’s keyboards swooping with space-age analog drops that lend some extra color to their palette of gloom.

This time around, Pinkish Black also benefit handsomely from much crisper production values. For while a band of their ilk can do wonders in much murkier sonic waters, the added clarity and richness of Razed to the Ground allows their synthetic sludge to sparkle a bit more brightly. Beck tends to juxtapose ethereal highs against fat, fuzzy lows, and the contrast between the two on the dizzying opening track “She Left Him Red” is all the more dazzling. In the subtler, more hypnotic “Ashtray Eyes,” the duo opts for a more conventionally beautiful dirge, layers of analog waves floating over a more restrained, sparse beat. And the breathtaking, beastly “Bad Dreamer” takes a detour through some graceful, gothic piano before introducing the fuzz machine back into the mix.

As Pinkish Black continue to refine their many shades of dark, the metal aspects of their sound have diminished a bit. They still crush and terrify, but in increasingly subtle ways. On Razed to the Ground, Pinkish Black are exploring the nuances and intricacies of their sound with greater attention to detail. There’s clearly a lot left to excavate, but these findings are simply breathtaking.