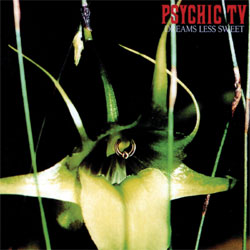 The prettiest song Genesis P-Orridge ever wrote was “The Orchids,” a simple, pastoral folky gem from Psychic TV’s 1983 album Dreams Less Sweet. It’s a far cry from the noisy electronic bastards that his previous band, Throbbing Gristle, so masterfully twisted into horrific shapes. And while TG certainly had their share of more melodic moments (“Hot on the Heels of Love” comes to mind), “The Orchids” is something different altogether, a gorgeously upbeat and, frankly normal, song, not to mention one whose very gorgeous intricacy seemed very much of another time. Not that it was ever released as a single, or promoted as such. Califone somewhat famously covered it on their 2006 album Roots and Crowns, but by then it was still something of an obscure, underground classic. Still, it’s a classic all the same.

The album it comes from, Dreams Less Sweet, is a bit more experimental and difficult on the whole. It’s not Throbbing Gristle difficult — that’s a level of audio antagonism that few artists can continue to muster over time, let alone one of the band’s original players. But P-Orridge, along with former bandmate Peter Christopherson, carved a similar path with Psychic TV, albeit one with a considerably different approach. That approach is a confusing and complicated, yet continually intriguing one on Dreams Less Sweet, an album that puts industrial pieces alongside a cappella chants, found sound, audio collage and the occasional true pop song.

Dreams Less Sweet, then, isn’t a wholly inaccurate title. It does contain moments of sweetness, such as the glorious “The Orchids,” and the playful lullaby, “White Nights.” Yet by and large, it’s more nightmarish overall. Barking dogs and gunshots erupt in “Finale.” Clatters and stomps are met with unsettling drones in the 41-second “Botanica.” And distant sounds of chanting sidle up against ping-pong percussion and bassy piano in “Ancient Lights.” Let there be no question about it — this album is bizarre.

Then again, it’s very much part of P-Orridge’s M.O. His life has been spent as a provocateur, and Dreams Less Sweet accomplishes that handily, even more so because he does allow himself unexpected moments of beauty and simplicity. Yet the most unsettling moments on the album are those that are just musical enough to be alluring, but still somewhat terrifying in spite of it. Take “Eden 1,” whose introduction is a collage of ringing telephones, which give way to a plodding dirge and hissing, squealing sonics beneath P-Orridge’s narration. And “In the Nursery” is by far the moment in which Psychic TV most closely resembles Throbbing Gristle, howls and screeches creating a house of horrors while P-Orridge maintains a characteristically unhinged performance.

Now 30 years old, Dreams Less Sweet has been given new life as a limited-edition reissue through Angry Love Productions, a label started by both P-Orridge and Edley O’Dowd. The original album is pressed on red vinyl, and packaged with a bonus disc of unreleased material, including two interviews and 35 minutes of rare music. The curious thing about this extra material, though, is that much of it is reasonably accessible by the standards of one of noise music’s pioneers. “Catalan,” though unsettling, has an appealing melodic sequence. And the 14-minute “The Full Pack” balances exotica, film score, spoken word and noise to craft a symphony of tortured art. Still, the extra tracks don’t quite match the demented genius of the original album, which is made all the more twisted by containing the prettiest song its mad scientist ever wrote.

NON/Boyd Rice – Back to Mono