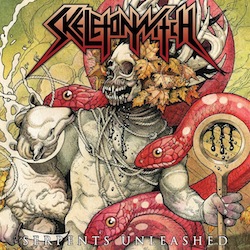 The release of a new Skeletonwitch album is generally accompanied by certain expectations. For starters, there definitely shouldn’t be any songs longer than five minutes — and truthfully, even four minutes seems excessive. See, a Skeletonwitch album is like a heist; the longer it takes to do the deed, the greater the risk that something could go wrong, and thus the Athens, Ohio group is at their best when getting straight to the deadly point. Another expectation is that there should be no ballads. Other metal bands can take care of dropping the tempo and softening up a little, but Skeletonwitch is here to rock. Which brings us to the third and most important expectation of each and every Skeletonwitch release — it should absolutely and unapologetically destroy.

Serpents Unleashed, the band’s fifth album, meets all of these expectations swiftly and without compromise. It’s a brisk 30 minutes of hook-driven blackened thrash, evil enough for an evening of non-Disney approved destructive mischief, but engineered to soundtrack a beer-fueled house party full of punks and heshers. Metal definitely gets more accessible and menacing with a tweak in either direction, but it rarely gets more fun.

Picking up mostly where 2011’s Forever Abomination left off, Serpents Unleashed benefits greatly from the production of Converge’s Kurt Ballou, who lends the album a streamlined, crust-influenced sound that maintains the dynamic melodies the band is known for, while giving their power-chord riffstorms an extra dose of venom. It sounds crisp and razor sharp, but with the feel of classic speed or thrash metal from the 1980s. The high-speed gallop of the title track and “Blade on the Flesh, Blood on My Hands” are reminiscent of the more visceral rippers on Converge’s last two albums, which shouldn’t necessarily come as a big surprise. Ballou’s production style is becoming as distinctive as Steve Albini’s these days. But he doesn’t attempt to merely cloak the band’s style in the sounds of his own. More than ever, the focus seems to be on highlighting the soaring melodies and choruses the band engages in, like the mesmerizing harmonization on “Unwept,” the infectious four-chord punch of “I Am of Death (Hell Has Arrived),” or the melodic death-metal assault of “Burned From Bone.”

There are a handful of moments on Serpents Unleashed where Skeletonwitch come dangerously close to hammering out the blackened thrash equivalent of a hit. “Unending, Everliving” is the mightiest of these standouts, opening with a triumphant fanfare of guitar riffs before ushering in a two-minute session of hooks and headbangs. And the mid-tempo swagger of “This Evil Embrace” shows that slowing the tempo can be even more badass than charging full-steam ahead at all times. Not that that isn’t a blast. The variations that Skeletonwitch introduce into Serpents Unleashed aren’t drastic reinventions or total renovations of an already great sound. And they don’t have to be. As long as they absolutely, unapologetically destroy — and they do — Skeletonwitch have done what they came to do.

Skeletonwitch not welcome in the Magic Kingdom